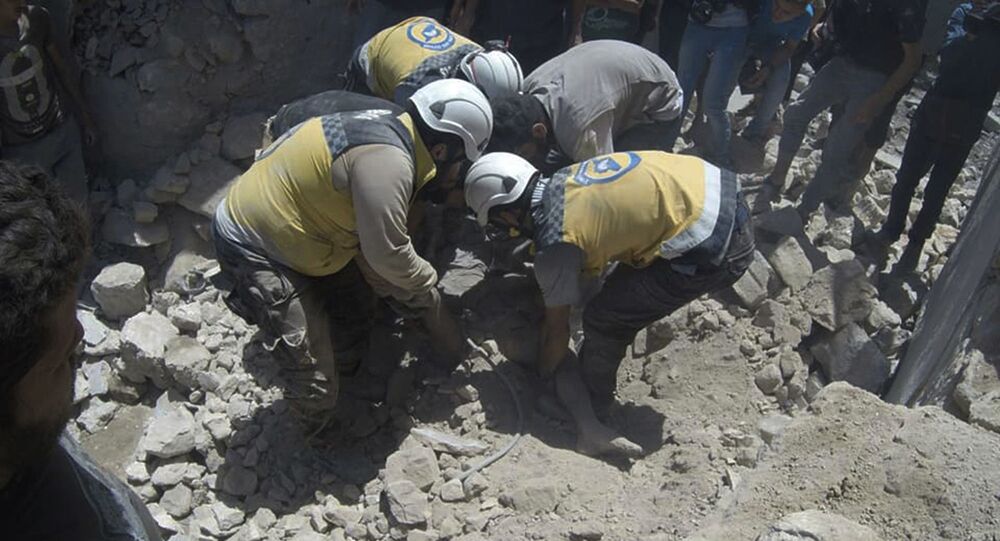 The Russian Centre for Syria reconciliation said a day earlier that the White Helmets, backed by Hayat Tahrir al-Sham (formerly known as the Al Nusra Front*), were preparing a new provocation involving toxic agents in Syria.

The White Helmets have finished filming a staged provocation implicating the Syrian army in the use of chemical agents, according to the Russian Centre for Syria reconciliation. The group's video will show fake casualties allegedly caused by a "chemical attack" by the Syrian government, the centre reported.

"According to the information that the Russian centre for Syria reconciliation received at around 16:00 Moscow time [13:00 GMT] from several independent sources, representatives of the White Helmets, together with terrorists, have finished the shooting of a staged video about the [Syrian] governmental forces' alleged use of 'toxic agents' against civilians in the Zerbah settlement of the Idlib de-escalation zone", the Russian Defence Ministry said in a statement.

The video shows the alleged consequences of a Syrian Air Force attack involving some "unidentified chemical weapon", the ministry added.

"Alleged 'human victims' with symptoms of 'intoxication' can be seen on the video in thick yellow smoke. The White Helmets are now ready to spread the fake video on social media for further dissemination through Western and Arab media", the Russian Defence Ministry noted.

The Russian military added that the White Helmets plan to spread fake videos via social networks for further dissemination throughout Western and Arab media.

According to the earlier report of the reconciliation centre, the White Helmets have delivered 400 litres of a chemical agent to the site where they plan to stage and film the provocation.

A day earlier, the Russian Defence Ministry called on all the participants of the provocation to abandon their "criminal plans" and asked Turkey to put pressure on the militants in the area of the de-escalation zone controlled by Ankara to prevent the provocation.

Around 15 representatives of the White Helmets arrived in the Idlib de-escalation zone on 1 February to prepare the provocation, which is expected to be conducted under the guidance of the leader of Hayat Tahrir al-Sham, who previously engaged in the 2017 chemical provocation in Idlib's Khan Shaykhun.

On 7 April 2018, reports about an alleged chemical attack in Eastern Ghouta’s Douma emerged. The European Union and the US promptly blamed Damascus for being behind it. The Syrian government rejected any involvement in the incident. Damascus and Moscow stated that the attack was staged by local militants and the non-governmental organisation known as the White Helmets.

© Sputnik / Morad Saeed
White Helmets Plotting False Flag Attacks in Syria, Captured Jihadist Militant Confirms
A week later, without waiting for the results of the international investigation, the US, the United Kingdom and France hit out at what they called Damascus’ chemical weapons facilities with over 100 missiles in response to the reported attack.

The OPCW finally arrived on the site following a long delay to conduct a probe. In March 2019, it issued a report on its investigation, saying that chlorine was "most likely" the chemical agent used in the incident but stopped short of apportioning blame.