Ilya Tsukanov
All materialsWrite to the author
Syrian troops liberated the strategic city of Maarat al-Numan in Idlib province on Tuesday, with the Russian military warning a day earlier that they had intelligence indicating that remnants of the notorious White Helmets ‘rescue group’ were plotting provocations in Syria due to the militants’ increasingly hopeless strategic situation.

The Syrian military has captured a militant who provided them with corroborating evidence that the White Helmets were preparing possible false flag chemical attacks in northern Syria. A video of the militant’s interrogation was provided to media by the Russian Defence Ministry’s Centre for Syrian Reconciliation.

The militant, a man named Abu Hamza, revealed in the video that he was responsible for guarding warehouses in the town of Kafer Hamra in the northern Aleppo countryside. There, he said, he recently saw the arrival of “people from civil defence,” that is, from the “White Helmets.”

“I don’t know what was stored there. Some time ago some people arrived in a minibus and loaded boxes with grey tanks and boxes with rocket parts and shells. They also took filming equipment,” Hamza said.

The man said that after fighting began, he was taken to the front in the area of Rashidin-4 in southwest Aleppo, where he fought with the ‘Jaysh al-Osman’ militant unit. Unfamiliar with the area, the man said he got lost during his retreat, leading to his capture. 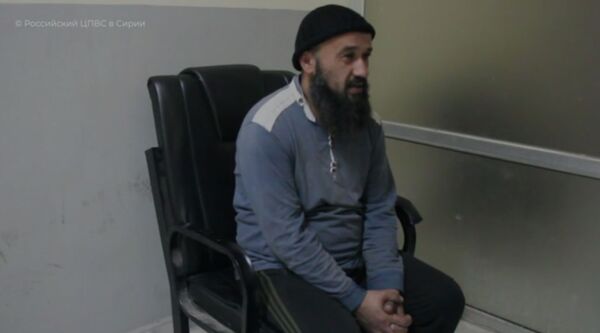 The militant’s testimony comes in the wake of reports Tuesday that over 40 White Helmets activists had arrived in the village of Einata, Idlib province, with fears that the activists may be preparing to stage a false flag chemical attack.

On Monday, the Russian MoD reported, citing intelligence, that militants and remnants of the White Helmets were planning to stage a provocation involving the use of chlorine gas against the civilian population to provoke a Western response. According to MoD spokesman Maj. Gen. Yuri Borenkov, two chemical laboratories in the towns of Akrabat and Selhab in Idlib province were being used to synthesize the chemicals, with specialists working in these labs receiving training in Europe. On Tuesday, the Syrian military regained control over the strategically important city of Maarat al-Numan in Idlib province. The city, located at the junction of the Hama Aleppo highway, and linking Syria’s two largest cities of Damascus and Aleppo, had been a stronghold of the terrorists since 2012. The Syrian military began an operation to clear southeast Idlib in December, freeing dozens of villages before a ceasefire stepped into effect earlier this month. However, militants repeatedly broke the ceasefire and attacked government troops and civilians, prompting Damascus to retaliate and restart its offensive.

The White Helmets ‘rescue group’, widely praised by Western media as heroes saving lives in militant and terrorist-occupied areas of Syria, have been derided by the Syrian government and its allies as ‘al-Qaeda’s civil defence’ network. Founded by former British mercenary James Le Mesurier, who was found dead outside his apartment in Turkey late last year, the White Helmets have been repeatedly spotted working side-by-side with jihadists, and repeatedly accused of staging false flag chemical attacks. This includes the infamous 2018 false flag chemical attack in Douma, which trigged airstrikes by the US, the UK, and France in April of that year. Earlier this month, former Organization for the Prohibition of Chemical Weapons specialist Ian Henderson blasted the watchdog for releasing a “sanitized” report on the alleged Douma attack, claiming it omitted key findings from its own fact-finding team. According to Henderson, these details would have cast serious doubt on whether a chemical attack took place at all, thereby undermining the justification for the Western airstrikes against Syria.