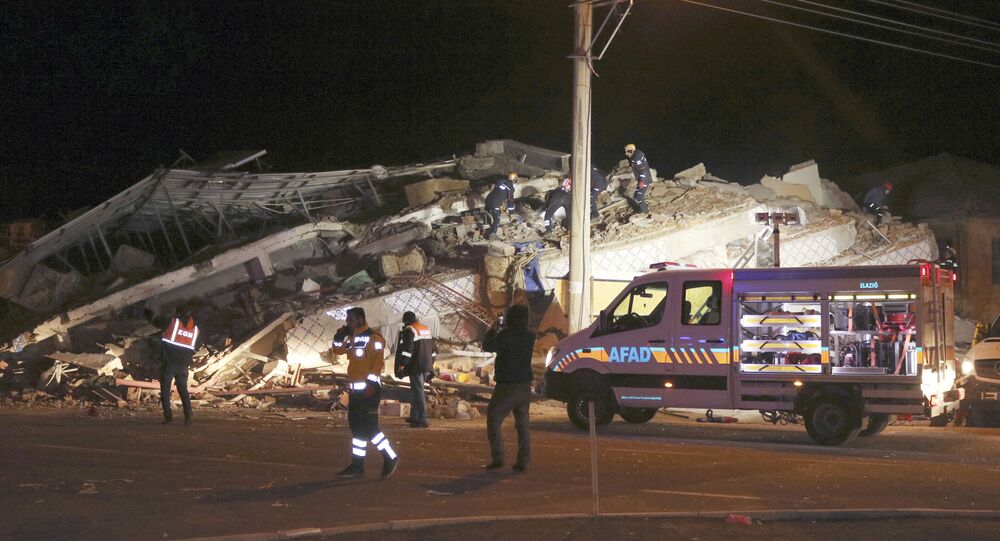 MOSCOW (Sputnik) - Turkey’s Interior Minister has introduced a wave of measures to provide support for families affected by a deadly earthquake in the eastern province of Elazig, with the government set to build shelters to host 1,000 families and provide emergency rent support for people living in homes earmarked for demolition, media reported.

According to the Anadolu news agency, Turkey’s Interior Minister Suleyman Soylu announced at a press conference, flanked by other senior ministers, that 1,000 families will be housed in temporary shelters in Elazig that will be fully constructed in 10 to 15 days’ time. The shelters will have hot water and electricity, the interior minister added.

Soylu also announced that families living in heavily-damaged homes will be offered 41,000 liras ($6,891) in emergency rent support, the agency reported. The government has also reportedly committed to building 2,000 new homes in the earthquake-affected area.

© Sputnik / Sputnik
Live Updates: Second Earthquake 5.1 in Magnitude Hits Turkey's Elazig Province
Turkey’s Disaster and Emergency Management Authority (AFAD) reported that 1,516 of 1,607 people who were hospitalized after the earthquake have been released. Rescue operations are still ongoing in Elazig province to find any further survivors or bodies. So far, 45 people have been rescued from the rubble of collapsed buildings, the agency reported.

A 6.8 magnitude earthquake hit the Elazig province at 20:55 local time (17:55 GMT) on Friday. The disaster also affected the neighbouring province of Malatya. According to AFAD, 948 aftershocks of were recorded in the aftermath of the earthquake.