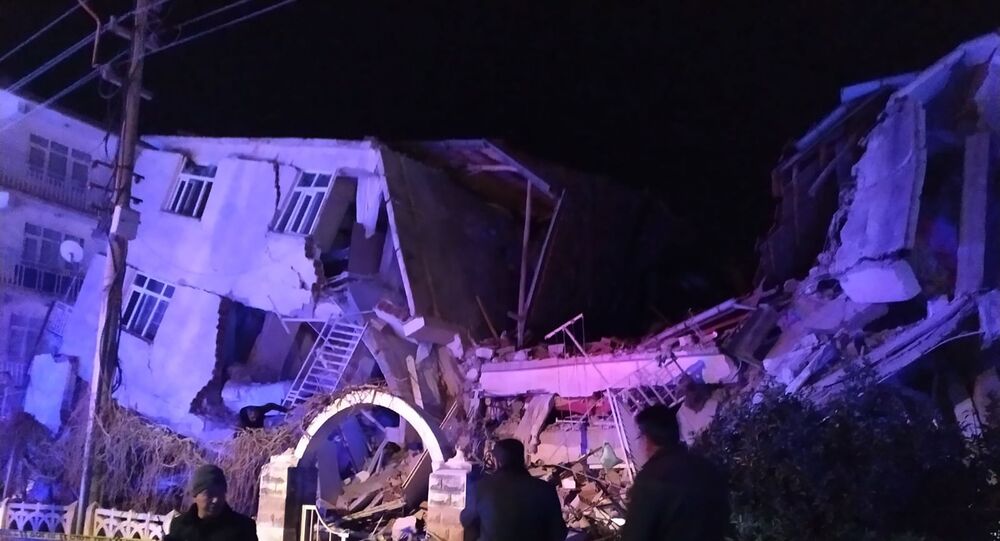 The natural disaster has claimed the lives of at least 19 people and left 772 more injured so far, while rescue teams are still trying to save those under debris. The quake has been felt in neighboring Syria and Iraq, also in Lebanon and Israel.

A magnitude 6.8 earthquake struck eastern Turkey at 8.55 pm local time (17:55:10 GMT) on Friday, the European Mediterranean Seismological Centre (EMSC) reported. The epicentre was located 210 kilometres northeast of Gaziantep and 10 kilometres north of Doganyol, at a depth of two kilometres.

According to the Turkish minister of health, at least 19 citizens have been killed and more than 770 injured in the quake so far.

"We have lost 19 citizens. We have 221 injured in Malatya and 551 in Elazig", said Minister of Health Fahrettin Koca.

Earlier, it was reported that the quake has killed at least 18 people and left another 553 injured so far, Turkey's Interior Minister Suleyman Soylu said.

At least 30 people are reported to be still under the debris in Elazig, while the officials say the number of casualties may increase.

According to the EMSC, which has visualised a map of the affected regions, the quake may have been felt by around 120 million people.

The #earthquake has been potentially felt by 120 millions inhabitants pic.twitter.com/vdnSlvD0rD

Several buildings have either collapsed or been seriously damaged as a result of the quake.

This is so heartbreaking😞 Our prayers are with the victims and their families🙏❤️ #elazig pic.twitter.com/YTAMsf2E8v

Following the original quake, there were also aftershocks of 5.4 and 5.1 magnitudes that hit Sivrice and Baskil at 9.08 pm and 9.17 pm, respectively, according to the country's Disaster and Emergency Management Presidency (AFAD). The tremor in Sivrice occurred approximately 7.03 km from the ground and 10.62 km deep in Baskil.

Emergency teams rushed to the rescue, including Red Crescent (Kizilay) and the Disaster and Emergency Management Presidency (AFAD), according to Turkish President Recep Tayyip Erdogan, cited by the Anadolu Agency.

​Erdogan also said that the minister of environment and urban planning, the health and the interior ministers are to be sent to the region to address the aftermath of the quake.

A video has been shared on social media showing the moment the quake shook Elazıg province while a TV programme is on air.

Another video capturing kitchen stuff trembling and falling down inside a house in Elazıg has also gone viral.

Earthquakes under 6.0 magnitude are typical for Turkey, which is located in a seismically active zone. However, the country has also suffered extremely powerful quakes in its history, with the latest hitting the western province of Manisa just two days ago.