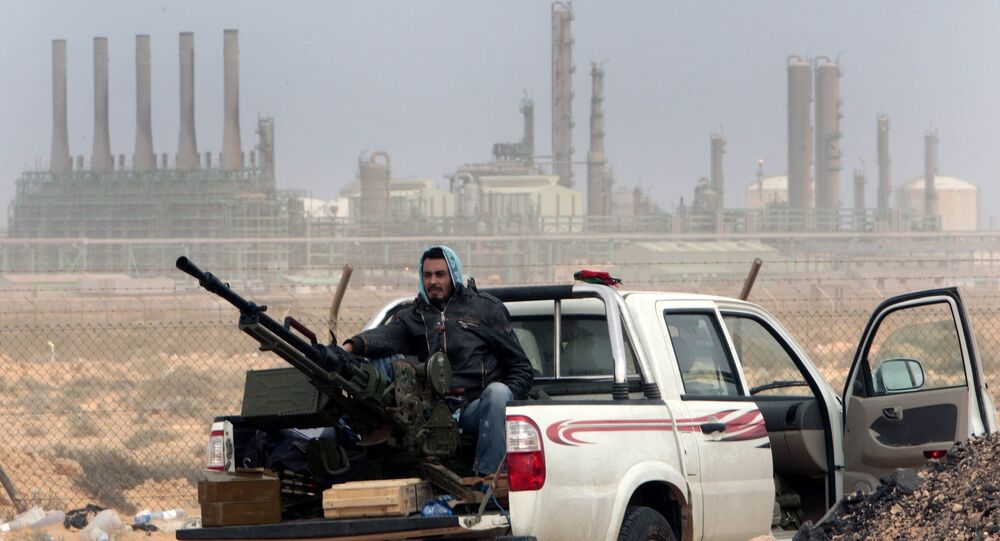 A spokesperson for the NOC on Sunday warned that Libya's oil output would experience a drastic slump within few days if LNA forces continue to impede transportation routes for oil facilities. The production of crude could be cut to just 72,000 barrels per day (bpd), the spokesperson forecast, cited by Reuters,

Libya has reportedly been producing some 1.2 million bpd of oil in recent months, and almost all fields located in the area are controlled by the LNA.

According to the company, Haftar ordered oil ports and fields blockaded ahead of an international peace summit on Libya in Berlin.

The NOC has condemned the move and slammed Haftar's maneuvers as "setting fire to your own house”.

"Shutting down oil exports and production will have far-reaching and predictable consequences. If the shutdown is prolonged, we face collapse of the exchange rate, a huge and unsustainable increase in the national deficit, the departure of foreign contractors, and the loss of future production, which may take years to restore. The main beneficiaries of this act will be other oil-producing states, and the harm will be entirely to Libyans. This is like setting fire to your own house”, the NOC said in the statement.

The United Nations earlier expressed its concern for the closure of oil fields in Libya. Russia's acting foreign minister, Sergey Lavrov, said Sunday that the final document agreed at the Berlin conference on Libya contains a clause stating that all Libyan people are entitled to the country's energy resources.

Representatives from a number of countries and organizations, including Russia, the United States, Turkey, Egypt, the European Union, the United Nations and the African Union met in Berlin on Sunday to find solutions to the conflict in the North African country. The Berlin conference follows last week's intra-Libyan talks in Moscow, mediated by Russia and Turkey.

© REUTERS / Murat Cetinmuhurdar/Turkish Presidential Press Office
Turkish Foreign Minister Takes Over as Erdogan Cuts Short Visit to Peace Talks on Libya - Source
Libya has been locked in a conflict between two rival administrations - the UN-backed Government of National Accord (GNA), and the LNA-supported elected parliament in the east. Over the past several weeks, the situation has escalated amid the LNA's advances on Tripoli.

Haftar attended a one-day summit in Berlin on Sunday, despite abruptly abandoning talks last week in Moscow brokered by Russia and Turkey for a ceasefire deal. GNA head, Fayez Sarraj, and Haftar did not meet at the Berlin summit - and did not meet in Moscow either - highlighting an ongoing diplomatic fracture between the two rival parties.

Haftar earlier declared a "general mobilization" to resist foreign forces and continue military advancements as a means of recapturing the capital city of Libya. Haftar's announcement followed the GNA's invitation to Ankara to provide Turkish forces to assist the Western-backed authorities in the prolonged civil war.