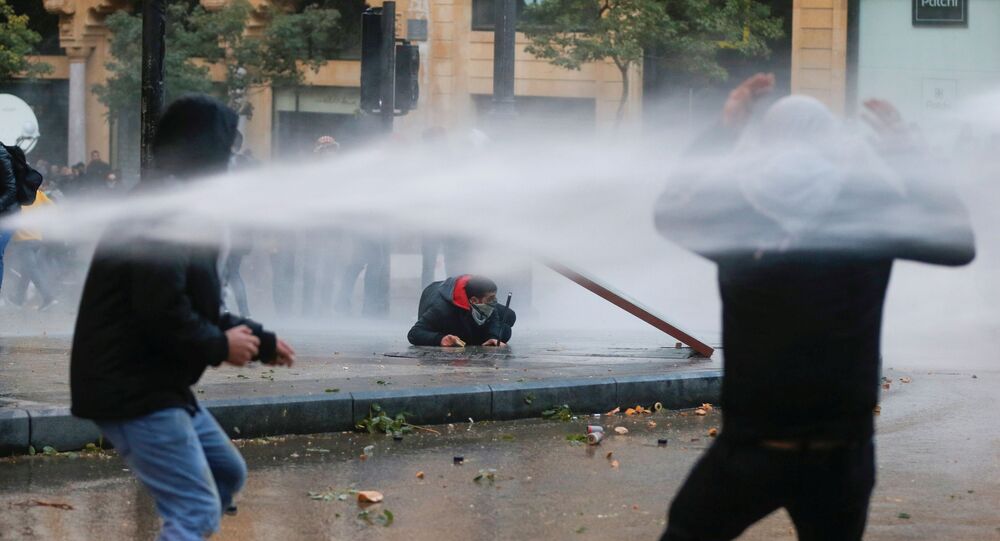 On 18 January, what began as a peaceful rally in Beirut soon turned violent, as protesters attempted to storm the parliament building's fences and threw stones and firecrackers at law enforcement. Police fired tear gas and water cannons to disperse them.

Lebanese law enforcement has fired water cannons at protesters who were throwing stones near the parliament in Beirut during the second day of clashes, according to local media broadcasts.

Alleged videos of police using water cannons against the demonstrators have appeared online, although the information hasn't been confirmed yet.

Water canon in #beirut #Lebanon moments ago. Many of the protestors teenage boys from Tripoli - they say they’ve come down to Beirut because they want to bring down the government pic.twitter.com/dV9mSdmMyC

Beirut: Security uses water cannon to disperse the demonstrators in front of the House of Representatives https://t.co/zTcoTgIORi pic.twitter.com/JWz1CF5yLI via @Akhbaralsaha #Lebanon

Police have reportedly fired back at the protesters with tear gas, videos posted by social media users show.

Scene now outside Parliament in downtown #Beirut - protestors taking running shots at police who are firing back with tear gas #Lebanon pic.twitter.com/2npmfzIOTi

Protesters from across Lebanon flocked to Beirut a day earlier to attend a rally against economic mismanagement and the weakening national currency, dubbed "Saturday of outrage". Clashes with law enforcement ensued as demonstrators attempted to storm the parliament building's fences. More than 165 people were injured in the clashes, according to the Lebanese Red Cross. Lebanon’s President Michel Aoun has ordered the army to the capital to protect peaceful protesters and keep the situation under control.

© REUTERS / Mohamed Azakir
Lebanese Police Fire Tear Gas as Clashes With Protesters Resume in Beirut's Centre - Videos
Mass protests engulfed Lebanon last October amid a crippling economic crisis. People have been demanding urgent reforms to end the deepening liquidity crisis, which the country’s president has blamed on the US sanctions. The US in August sanctioned Jamal Trust Bank and its insurance companies, accusing the financial institution of providing services to Hezbollah. The resignation of Prime Minister Saad Hariri's government last autumn failed to remove people from the streets. In the absence of a new cabinet ever since, the Lebanese have seen their national currency devalue. The Lebanese pound has fallen more than 60 percent against the US dollar over this period.
...
Reddit
Google+
Blogger
Pinterest
StumbleUpon
Telegram
WhatsApp
52
Tags:
water cannon, tear gas, Parliament, police, Protests, Beirut, Lebanon
Community standardsDiscussion
Comment via SputnikComment via Facebook