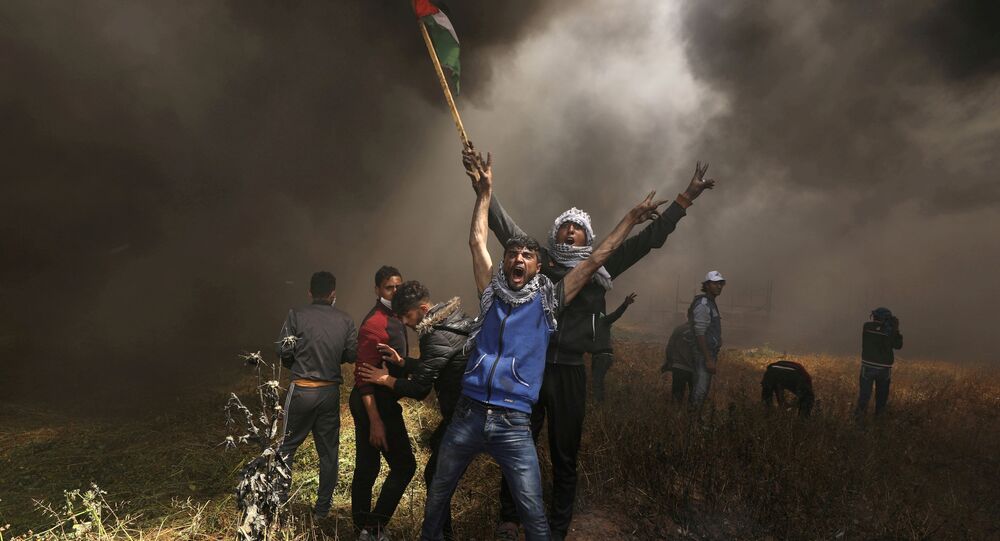 Benjamin Netanyahu’s Son Yair to UK Diplomats: ‘You Will be Kicked Out of Israel Soon’

The long-standing United Nations position on the status of the Palestinian lands is that they are illegally occupied by Israel. Decades of negotiations with Israel have yielded no results, and the prospects of a sovereign Palestinian state have been looking increasingly dim.

Yair Netanyahu, the eldest son of Israeli Prime Minister Benjamin Netanyahu, has called for the expulsion of British diplomats from the country over the status of Palestinian territories.

The British Consulate in Jerusalem last week announced on Twitter that Prince Charles would pay a visit to the “occupied Palestinian territories” in January.

Yair Netanyahu replied to the tweet: “God willing you guys will be kicked out of Israel soon. Until then I’m thinking of visiting the occupied lands of Scotland or Wales, which do you recommend?”

God willing you guys will be kicked out of Israel soon. Until then I’m thinking of visiting the occupied lands of Scotland or Wales, which do you recommend?

“Northern Ireland is recognized as part of *Britain* by the entire world", he wrote in a follow-up tweet. “All the British settlers stayed there. Nobody claim[s] they should be relocated. Nobody disputes Britain [sic] sovereignty there and claims it belong[s] to the Republic of Ireland".

His rebuke has generated a mixed reaction, with some commenters hitting back. “Last time I was in Wales there were no military checkpoints, services weren't cut-off and air strikes were fairly non-existent”, one user wrote, referring to the Israeli blockade of the Gaza Strip, where Hamas and Islamic Jihad are active.

Others reminded the younger Netanyahu that people in Scotland and Wales have the same rights as other UK citizens, unlike Palestinians in the West Bank and Gaza who have a separate judicial and military system.

“When Palestinians have both a free an equal vote in the Israeli elections AND [a] constitutionally protected self-government as a country within a federal arrangement, then your comparison will be slightly closer to valid", another commenter said.

The “occupied Palestinian territories” is a common term for the Gaza Strip and the West Bank, as well as East Jerusalem, which Israel recaptured from Jordan and Egypt during the Six-Day War in 1967. Israel withdrew its forces and settlers from Gaza in 2005 and also treats the West Bank separately from the State of Israel. Much of the international community, including the EU, Russia and China, considers Gaza and the West Bank to be occupied by Israel and Israeli settlements there to be a violation of international law.

Israel disputes this, arguing that it took over the Palestinian territories as a result of a defensive war and that no state had a legitimate sovereignty over them prior to the 1967 war, so the term “occupied” cannot be used in this case.

Palestinians have long pushed for the creation of a sovereign state alongside Israel, but differences between two rival Palestinian factions, Fatah and Hamas, as well as Israel’s apparent satisfaction with the status quo have cast doubt on the viability of the two-state arrangement.

Yair, 28, is a vocal defender of his father’s policies. Prior to the inconclusive September general election Benjamin Netanyahu promised that he would annex Palestinian territories if he gets re-elected.

The prime minister was formally indicted last month on charges of bribery and corruption, but retained leadership of the governing party Likud in a leadership primary this week. He is expected to request immunity from members of parliament next week by the 2 January deadline.

Yair Netanyahu has also courted controversy in the past over a 2015 tape recording of him boasting to his friends about soliciting prostitutes and about his father helping a gas tycoon secure a $20 billion deal. He called those comments a “bad joke” and faced no inquiry.