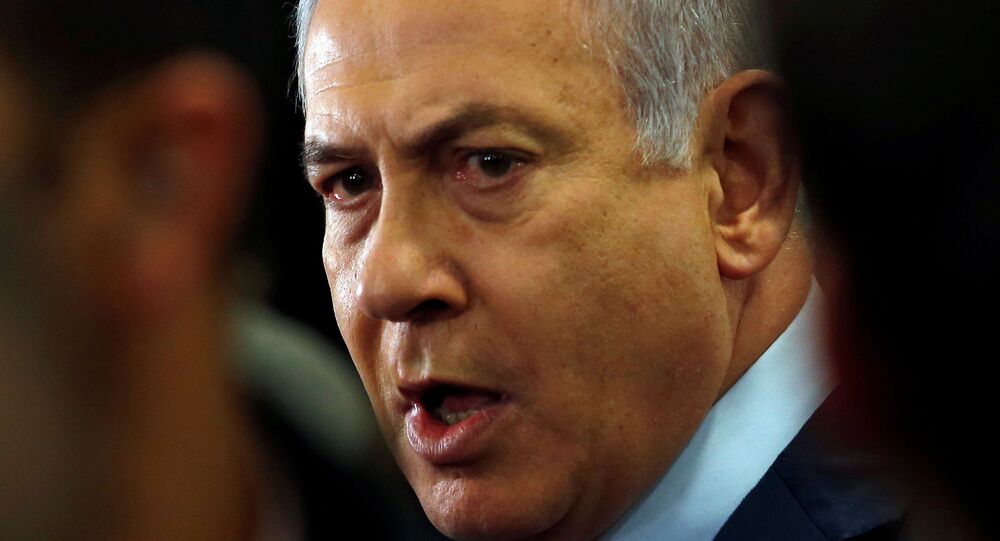 The political deadlock in Israel took a new twist on 21 November, when the country’s Attorney General announced corruption charges against Prime Minister Benjamin Netanyahu in three cases. While Netanyahu has dismissed this as a "coup attempt", his rivals from opposition parties have intensified their calls for him to resign.

Two major Israeli broadcasters, Channels 12 and 13, have reported that some members of Benjamin Netanyahu's party Likud are plotting to oust the PM from his post as party leader. Neither of these channels identified either the plotters, or the sources for their reports. Sputnik could not independently verify the information.

According to reports, senior Likud lawmakers have started looking into ways to remove Netanyahu from the party's leadership since the country's Attorney General Avichai Mandelblit announced his indictment on corruption charges, believing that "the Netanyahu era is over".

The only way they see that this is possible is in finding a single candidate who’ll enjoy the support of party members and, at the same time, be able to gather 61 votes in the Israeli parliament, the Knesset, to become the new prime minister and form a government. They have 20 days to pull this off because after that the country will have to hold new elections, the third in a year, due to the inability of political forces in the country to agree on a new coalition government.

Public Support For Netanyahu – From Party and Beyond

Right now these plotters are reportedly conducting polls to determine who has the highest chances of replacing Netanyahu, who is allegedly supported by high-ranking members of Likud. Some of them, as well as Cabinet members, have recently expressed their public support for the indicted prime minister.

Foreign Minister Israel Katz recalled that Netanyahu has not been convicted yet and still enjoys the presumption of innocence applied to him as for any other Israeli citizen. Deputy Foreign Minister Tzipi Hotovely called to support the prime minister in a "difficult time". Likud member of the Knesset Ofir Akunis said that justice is "the supreme ruler" in Israel and that unless proven otherwise, Netanyahu remains innocent.

Culture and Sports Minister Miri Regev noted that the prime minister has "dedicated his life to Israel for 50 years", criticising the criminal case against him. Education Minister Rafi Peretz also praised Netanyahu's "dedication" to his job in any capacity - as a soldier, officer, minister, or prime minister.

Attorney General Avichai Mandelblit announced on 21 November that he will indict Benjamin Netanyahu on charges of bribery, fraud, and breach of trust in Cases 1000, 2000, and 4000. He also notified the Knesset of his intentions so it could decide whether or not to strip the prime minister of his immunity.

According to reports by Israeli Channel 12, Mandelblit will allow Netanyahu to keep his post for now, but will ask him to vacate other ministerial portfolios he is currently holding - agriculture, health, social affairs, and diaspora affairs.

Netanyahu is accused of trying to bribe the press with political favours to secure favourable coverage, as well as receiving and even demanding valuable gifts in alleged quid-pro-quo deals with two millionaires. The prime minister denies any misconduct on his part.

Netanyahu 'Unlikely' To Stay in Power 'Beyond March 2020' - Pundits

‘Too Many Loopholes’: Netanyahu May Avoid Quick Trial Thanks to Political Instabilities