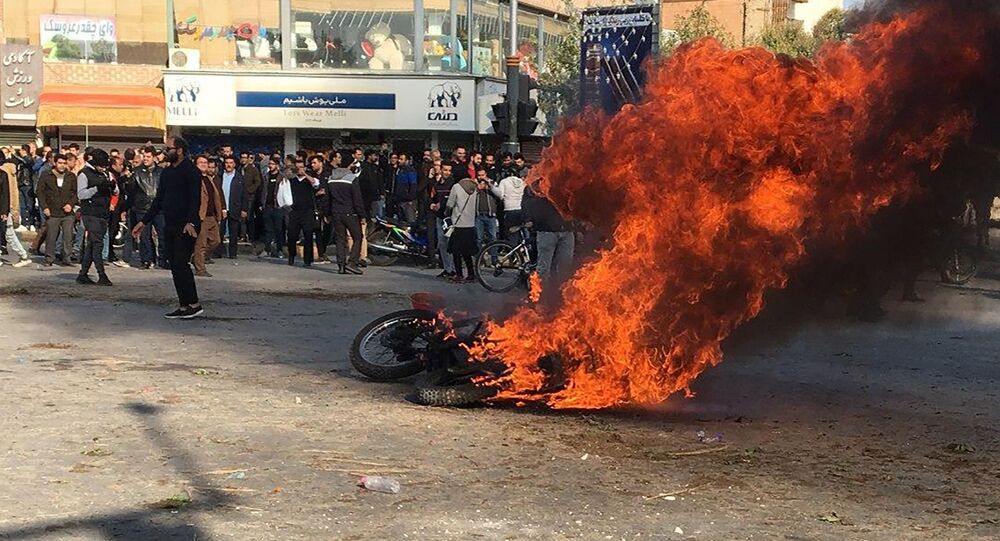 Major protests erupted across multiple Iranian cities on Friday after the government announced that it would increase gasoline prices in a bid to save resources as the country struggles to deal with the impact of US sanctions pressure.

US Secretary of State Mike Pompeo is being a hypocrite in expressing support to Iran’s fuel price protesters, and the US is only interested in seeing Iran falling into chaos, Iranian parliament speaker Ali Larijani has said.

“The US’s goal vis-à-vis Iran is nothing other than to disturb its security and set fire to the Iranian nation’s interests,” Larijani said, speaking in parliament on Monday, his remarks quoted by Press TV.

Larijani’s remarks echoed those of foreign ministry spokesman Abbas Mousavi, who similarly condemned Pompeo, and said that it was “curious that the sympathizing is being done with the people who are under the pressure of America’s economic terrorism.”

On Saturday, Secretary Pompeo tweeted an appeal to the protesters, saying “to the people of Iran” that “The United States is with you,” accompanying his post by a year-old message about “the proud Iranian people…not staying silent about their government’s abuses.”

On Monday, the Russian foreign ministry expressed support for Tehran, saying that although internal difficulties and the rising gas prices certainly played a role in the protests, there was also evidence that “foreign forces are also working actively” to contribute to the escalation.

Protesters took to the streets of multiple cities across Iran on Friday to protest the rise in fuel prices by Iran’s state-owned National Oil Company by up to 50 percent. The Iranian government assured Iranians that the gas price increase and new quotas for commercially-sold gasoline would free up money to help low-income families. Furthermore, the expected savings of the equivalent of about $2.7 billion were aimed at helping to balance the economic situation in Iran in the midst of US sanctions.

On Monday, Iranian authorities reported that several law enforcement officers had been attacked and killed in the rioting which has taken place in recent days, with at least one protester also killed during clashes with riot police in the city of Sirjan on Friday.

Iran's Revolutionary Guards warned Monday that they would take "decisive" action against rioters if violent protests continued. "If necessary we will take decisive and revolutionary action against any continued moves to disturb the people's peace and security," the Guards said in a statement read on state television and quoted by Reuters.

Supreme Leader Ali Khamenei doubled down on the fuel price hikes on Sunday, saying that while he understood people’s anger over increasing prices, “sabotage and arson are done by thugs, not our people.” Khamenei added that such sabotage was supported by “Iran’s enemies.”