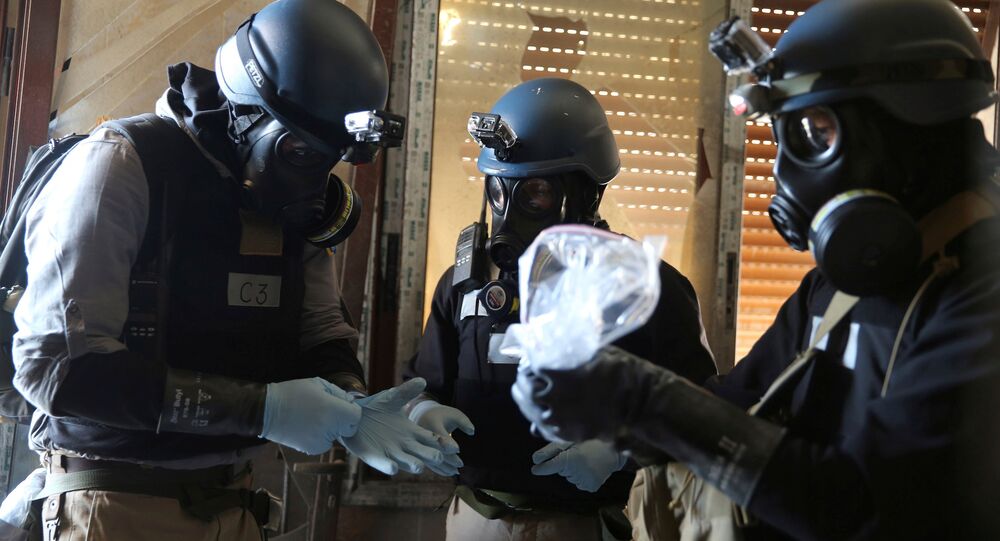 Last month, WikiLeaks published the evidence and testimony provided by an Organisation for the Prohibition of Chemical Weapons (OPCW) whistleblower who revealed that the watchdog appeared to have wilfully ignored data that the Syrian government did not stage a chemical attack in Douma, Syria in April 2018 in order to fit a convenient narrative.

Recently, the Courage Foundation, a respected UK-based civil society organisation dedicated to protecting whistleblowers, convened a panel including Jose Bustani, former director general of the OPCW, WikiLeaks editor-in-chief Kristinn Hrafnsson and others to study whistleblower testimony which casts major doubt on the watchdog’s integrity in its investigation into the alleged April 7, 2018 chemical attack in Douma.

Along with testimony, the whistleblower provided materials including internal emails, text exchanges and suppressed draft reports, leading the panel to conclude that “key information about chemical analyses, toxicology consultations, ballistics studies, and witness testimonies was suppressed, ostensibly to favour a preordained conclusion.”

With the allegations made against the Syrian government over the alleged Douma attacks used by the US and its British and French allies to justify a series of airstrikes against Syria on April 14, 2018, the significance of the whistleblower’s revelations cannot be overestimated. Elizabeth Murray, Courage Foundation panel member and former US deputy national intelligence officer at the National Intelligence Council, said.

Suggesting that it is “technically impossible” for the OPCW to hide the details of its Douma investigation from the public over the long term, Murray noted that if the OPCW “hopes to salvage its reputation as an organisation with integrity,” it can’t continue to evade its responsibility to the international community by deliberately ignoring its senior experts findings in the face of US pressure.

“The truth is coming out, and it is not too late for the OPCW to clean house and enact internal reforms,” Murray noted, adding that plenty of other evidence, including senior OPCW scientist Ian Henderson’s report, has already emerged to challenge the official Douma narrative put out by the US and its allies.

Earlier this week, award-winning UK journalist Jonathan Steele mentioned the Courage Foundation’s report during an interview with the BBC, pointing out that this was the second scientist whistleblower to come forward to cast doubt on official results of the probe which served as a justification for the US-led air strikes against Syria. As pointed out by Sputnik’s Kit Klarenberg, Steele’s remarks were one of the first if not only times that the Douma whistleblowers’ concerns were mentioned by a mainstream media outlet.

Richard Falk, a professor emeritus of international law at Princeton University, and another member of the Courage Foundation panel, said he wasn’t surprised that the mainstream media has largely ignored the panel’s bombshell findings.

“The mainstream media rarely challenges official government versions of controversial events in the area of national security or in situations where combat conditions exist. The US government was heavily invested in discrediting the Damascus government in Syria, and showing that it was ready to intervene militarily if chemical weapons were used,” the academic explained.

According to Dr. Falk, the OPCW’s handling of the Douma investigation seems to confirm an unacceptable level of political influence from its members, particularly the US and the UK.

“In the instance of the controversy over the Douma attack, the OPCW acted in such an irresponsible and unprofessional manner as to suggest that its proper role was being distorted to achieve certain political ends, that is, stretching the evidence to make sure that Syria was found responsible for the use of [chemical weapons] on April 7, 2018 in Douma. This interpretation is bolstered by the refusal to give dissenters within an opportunity to offer skeptical assessments and counter-narratives,” Falk said.

Ultimately, Falk argued that although the OPCW certainly has “the capabilities to do a reliable job…its performance in relation to Douma casts doubt on its capacity to act impartially and without regard to political consequences, assessing the evidence rather than looking toward politically acceptable outcomes.”

© AP Photo / Hassan Ammar
People stand in front of damaged buildings, in the town of Douma, the site of a suspected chemical weapons attack, near Damascus, Syria, Monday, April 16, 2018

Mainstream Syria Narrative Benefits All the Wrong Actors, From the White Helmets to Daesh*

Eric Van de Beek, journalist and editor of Novini, a Dutch geopolitics magazine, says it’s not surprising that the Courage Foundation’s findings have not been covered by the mainstream media.  For one thing, he noted, “this may be the result of intimidation tactics. The moment journalists, academics or others show doubt about the Western narrative of ‘Assad gassing his own people’, they immediately get smeared as ‘Assad apologists’ or “Kremlin assets’.”

Secondly, Van de Beek explained, the “Assad is bombing and gassing his own people” narrative “is the only thing mainstream journalists have heard for about eight years in a row now,” with “dissenting voices…kept away from them, due to respected news agencies like Reuters and dubious organisations like Bellingcat and the White Helmets, financed by state actors and governmental non-governmental organisations.”

Whoever is responsible, the journalist argues that “it’s clear who has benefited from this: all actors pushing for regime change in Damascus, including ISIL and al-Qaeda.”

Joaquin Flores, editor in chief at the independent news portal Fort Russ, echoes Van de Beek’s concern, arguing that the lack of coverage of the Douma investigation is troubling, but not surprising, and there may be a silver lining. “Western legacy media companies are losing credibility, and public knowledge that their information is directly managed and produced by Western intelligence organisations is increasing,” Flores said.

According to the journalist, the alleged effort to pressure the OPCW to reach conclusions which fit “the narrative-driven version of reality created by the US” mentioned by the Douma whistleblower is nothing new, with similar pressure placed on Jose Bustani in 2002 ahead of the Iraq War, leading to his ouster as head of the OPCW.

Ultimately, Eric Van de Beek suggests that the Courage Foundation’s report on the Douma cover-up raises important questions, specifically: “What about the other alleged incidents with chemical weapons? Could it be some of them were staged too? Are we witnessing a rerun of Saddam’s WMDs? One might hope more conscientious people at OPCW or elsewhere will step up and speak out.”

According to the journalist, “it’s crucial” that “people who are ‘in the know’ speak out” on these issues. Otherwise, very dangerous situations may emerge. “Look at what the false allegations about Douma led to: a missile attack on Syria out of revenge. What if by accident Russian installations or soldiers had been hit? It could have led to a much larger conflict, between nuclear powers Russia and NATO,” he warned.

* Daesh, also known as ISIS or ISIL and al-Qaeda are terrorist groups outlawed in Russia and many other countries.