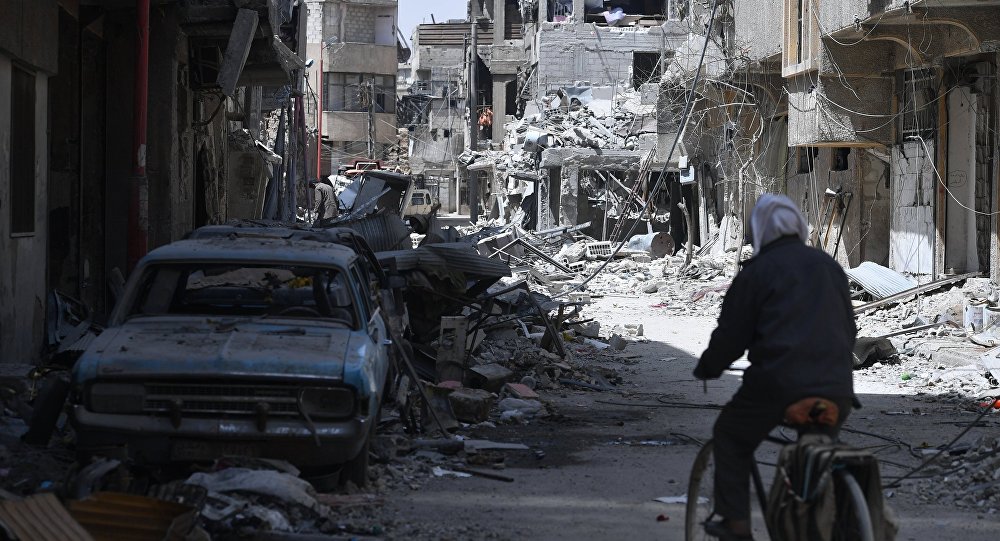 The US and UK bombed Syria on a lie. It has emerged that the Organisation for the Prohibition of Chemical Weapons (OPCW) report on the alleged use of chemical weapons by the Syrian government in Douma in April 2018 was redacted to remove expert opinion that the attack was staged.

Often words are woefully inadequate when trying to articulate the sheer anger and disgust you feel when you discover deceit and dishonesty within organisations hitherto seen as examples of integrity and professional honesty and independence. Anyone with more than one active brain cell no longer trusts the mainstream media to tell the truth and present facts in an even handed manner. The newspapers and TV stations are owned and controlled by millionaires and billionaires to do the bidding of the rich and wealthy. They will at all costs defend the status quo, the Establishment elites in each powerful nation, east and west. Newspapers and news stations deal day in and day out in pedalling lies, distortions and half-truths designed to feed the narratives which best serve the needs of the rich and powerful.

However organisations aligned with and supported by the United Nations are supposed to be different. They exist to serve truth not elites. They should be beyond the manipulation of powerful governments and individuals anxious to promote their own narrow interests and avoid proper scrutiny or public accountability for their actions. One such body is the Organisation for the Prohibition of Chemical Weapons (OPCW).

The OPCW's mission is to implement the Chemical Weapons Convention, the international agreement that bans chemical weapons, which are a grave threat to international security and humanity.

When the convention entered into force in 1997, the OPCW was formally established as an autonomous and independent organization working toward a world free of chemical weapons. According to the OPCW website, the Chemical Weapons Convention prohibits the "development, production, acquisition, stockpiling, retention, transfer, or use of chemical weapons" and has four key provisions:

Based in The Hague, Netherlands, 192 Members States have joined the OPCW, representing about 98% of the world's population, as well as 98% of the global chemical industry. The OPCW has an official working relationship with the United Nations to foster cooperation on matters of mutual concern. With such an honourable Mission Statement and close ties to the United Nations the authority and integrity of the OPCW is far reaching. That authority is now undermined, significantly.

A couple of weeks ago the Working Group on Syria, Propaganda and Media (WGSPM) published a document signed by a man named Ian Henderson, whose name is seen listed in expert leadership positions on OPCW documents from as far back as 1998 and as recently as 2018. It's unknown who leaked the document and what other media organizations they may have tried to send it to.

The links above are provided to invite you to read the Reports and verify the information for yourself. What is beyond dispute is the fact that the OPCW published a Report over 100 pages long this March in relation to the alleged use of chemical weapons in the area of Douma, on the eastern edge of Damascus, the capital city of Syria. That Report supported the US narrative which was widely promoted by the world's media in April last year that the Assad regime in Syria had deployed chemical weapons indiscriminately against women and children in the Islamist held territory of Douma.

The outrage against Assad and the Syrian regime was widespread and universally amplified by western media stations and newspapers. Assad was a ‘monster' and had to be ‘toppled' was the uniform message. Syrian government troops were closing in on the Islamist held territory of Douma at the time and aerial bombardments of terrorist held positions in Douma were taking place. Then video evidence of civilians foaming at the mouth and apparently chocking to death from inhalation of poisonous gas were released and beamed across the world via CNN, BBC, SKY News and every other western news agency.

Based almost exclusively on these videos and US military sources attesting to their authenticity massive air strikes against Syrian government positions were launched by the US, the UK and France. Thousands of ordinary civilians in Syria were killed, injured or displaced as punishment for Assad's alleged use of molecular chlorine delivered in cylinders dropped on Douma by the Syrian military.

Within days reputable journalists reporting from the actual areas affected, rather than comfortable studios thousands of miles away, refuted the accuracy of the media reports. The incorruptible Robert Fisk visited the hospital allegedly featured in the videos that depicted victims of chemical gas attacks being treated and found absolutely no confirmation from medical staff to support the narrative that was used to justify thousands of bombs being dropped on a sovereign nation by the US led coalition of NATO countries. Fisk was widely ridiculed and condemned in equal measure for daring to undermine the US narrative.

In March this year OPCW released their Report under the heading of ‘Fact Finding Mission Report' (FFM) with the key finding:

READ MORE: Alleged Chemical Weapons Use in Syria Needs to be Investigated — Moscow

The Report further outlines the discovery of two cylinders believed to have been used to carry the poisonous gas and that they impacted on buildings consistent with being dropped from the sky, also consistent with the US military narrative (Paras 2.12 —2.16) that Assad had ordered these chemical weapons to be dropped on the area.

So the OPCW Report in March provided ample justification for the western bomb sorties against Syria aimed at toppling the Assad regime. But now we know something different. Something shocking. The OPCW Report was doctored, manipulated, amended to exclude an authoritative expert engineering analysis which would have led to a diametrically opposed conclusion to the one promoted on March 1st.

A 15 page assessment of the two cylinders which had supposedly contained the offending molecular chlorine was excluded from the Report. This expert assessment suggested strongly that the two cylinders discovered by the Fact Finding Mission were not dropped on the area aerially at all. They were instead placed manually in the positions they were found.

The expert analysis therefore supports the Syrian and Russian narrative not the US Narrative. That the chemical gas released in Douma was not released by the Syrian military but by the Islamist terror groups who controlled the territory. Instead of justifying bombing missions against the Syrian regime the OPCW Report actually justifies supporting the Syrian regime offensive against the Islamist terror groups who occupied and controlled Douma and who are now cornered in Idlib.

The deliberately excluded Report from the engineering expert picks apart the extremely shaky physics and narratives of the official OPCW analysis on the gas cylinders allegedly dropped from Syrian government aircraft in the Douma attack, and concludes that:

"The dimensions, characteristics and appearance of the cylinders, and the surrounding scene of the incidents, were inconsistent with what would have been expected in the case of either cylinder being delivered from an aircraft," saying instead that manual placement of the cylinders in the locations investigators found them in is "the only plausible explanation for observations at the scene".

Let's be clear: OPCW's reputation, authority and integrity is in tatters. They are conducting an investigation into the source of the leak instead of tackling the real problem which is the corrupt and unforgivable decision to censor a Report which completely undermines the conclusion they instead sought to promote.

The whole course of the Syrian conflict could have been changed. Investigating the use of chemical weapons is never an exact science and will always rely on human sources with varying degrees of reliability and credibility. But physical evidence and expert engineering analysis is normally treasured and conclusive. Yet this time it was excluded. Literally thousands of lives have been lost and/or ruined on the basis of false narratives manufactured and promoted to suit the US agenda in Syria.

Never ever forget the loss of over one million lives in Iraq was based on a carefully manufactured, promoted and manipulated lie. There was no evidence of weapons of mass destruction. It was invented to justify an illegal and deadly invasion. The question is why has this leaked expert Report from the Fact Finding Mission of OPCW not been the top story lead for days across the news outlets and dominated page after page of newspaper coverage?

READ MORE: US Cannot Confirm Reports of Use of Chemical Weapons in Idlib — Envoy for Syria

The Report of a UN linked and supposedly independent world body has been manipulated to justify attacking Syria, a sovereign nation. Is that not newsworthy? Does all this matter? Nine days ago on 21 May the US State Department issued a statement alleging Assad was using chemical weapons "again" and the US military would "respond quickly and appropriately":

"Unfortunately, we continue to see signs that the Assad regime may be renewing its use of chemical weapons, including an alleged chlorine attack in northwest Syria on the morning of May 19, 2019"

We now have expert evidence which completely refutes the allegation that Assad's regime used chemical weapons in Douma last year so how reliable is the US narrative now that he is using such illegal weapons "again"? I suggest such allegations are completely unreliable and instead constitute a carefully constructed tissue of lies to justify more bombings of a sovereign country in complete violation of international law.

I am no apologist for Assad or his government but standing by in silence while the US bombs another country based on lies and manufactured narratives is to condone illegality and the loss of thousands more innocent lives. The US, UK and France should get out of Syria and the western media should be reporting the truth not conveniently constructed lies.