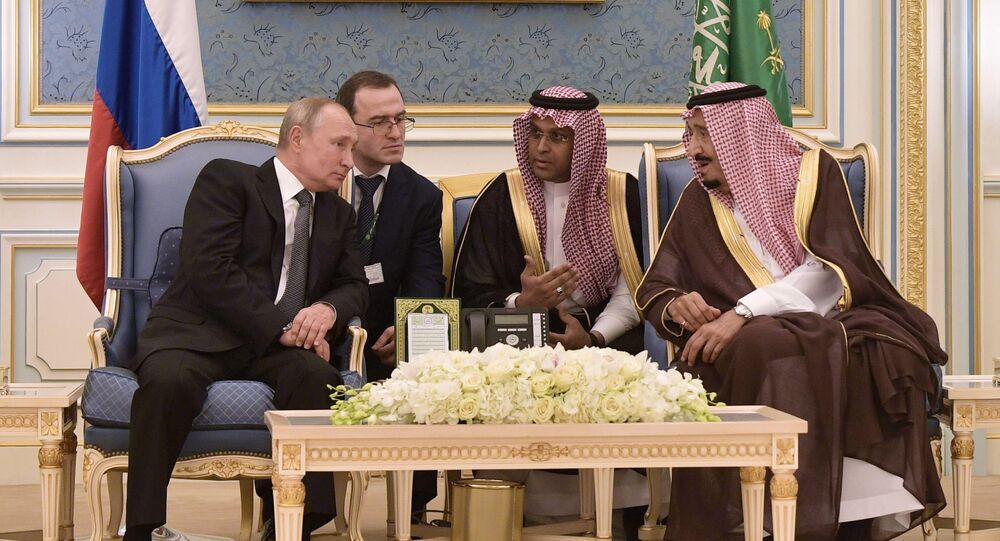 Russian President Vladimir Putin paid an official visit to Saudi Arabia on 14 October, which marked his first visit to the Kingdom in twelve years.

Russia considers coordination with Saudi Arabia as a necessary element to ensure security in the Middle East and North Africa, Putin said.

“We stand together for countering the terrorist threat, for a long-term political and diplomatic settlement of the crises in the Middle East and North Africa", Putin said during his state visit to Saudi Arabia.

On Monday, Russia and Saudi Arabia signed over 20 documents on the sidelines of President Vladimir Putin's visit to Riyadh, including the charter for long-term cooperation between the Organisation of the Petroleum Exporting Countries (OPEC) and non-cartel oil producers.

"We attach great importance to the Russian-Saudi coordination of the situation on the global energy market. With the active participation of our countries, it was possible to extend the OPEC+ format agreements on reducing oil production", Putin said at a meeting with Saudi Crown Prince Mohammed bin Salman bin Abdulaziz Al Saud in Riyadh.

He further elaborated that Russian-Saudi cooperation is aimed at "strengthening peace, security in the region and stabilising the situation in the global energy sector. And all this [cooperation] brings good, positive results".

In addition, a statement of intent was signed between Russia's State Space Corporation Roscosmos and the Saudi Space Commission about cooperating in financing space exploration and the GLONASS global navigation satellite system.

According to Kremlin aide Yury Ushakov, the agenda of the visit includes talks with top Saudi officials and focuses on Syria, Yemen and the situation in the Persian Gulf, as well as bilateral cooperation in the defence and energy sector.

Saudi Arabia and Russia launched the Russian-Saudi Economic Committee as part of Putin’s one-day state visit to the Kingdom. The newly-established body will lead efforts in developing economic, investment and trade ties between the two nations, according to the Russian Direct Investment Fund (RDIF).