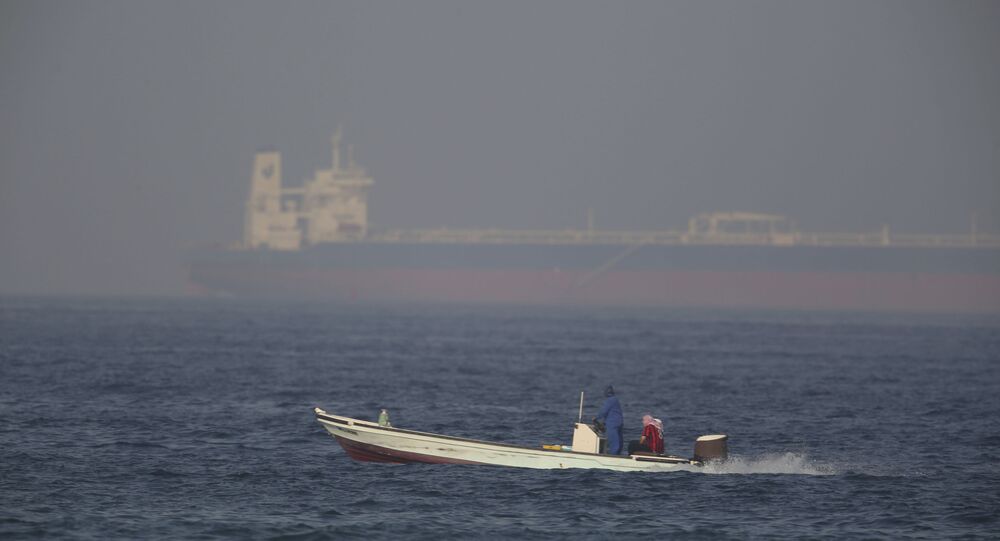 She told reporters in Helsinki that the European Union was closely watching the situation in the Persian Gulf as it unfolded but said Russia’s involvement was not the "first reason of concern."

"I think the main point here is to try and support some elements of rationality inside the region that can work on the common interest that the countries across the Gulf share," Mogherini added.

In July, Iranian Navy commander Rear Admiral Hossein Khanzadi said that Iran and Russia were planning to hold joint drills in the Indian Ocean region by the end of the year.

© AP Photo / Marcos Moreno
A view of the Grace 1 super tanker with the name "Adrian Darya 1" over the place where "Grace 1" had already been blackened out is seen in the British territory of Gibraltar, Saturday, Aug. 17, 2019. The shipping agent for an Iranian supertanker caught in a diplomatic standoff says the vessel is ready to depart Gibraltar in "24 to 48 hours," despite a last-minute effort by the United States to seize it again. (AP Photo/Marcos Moreno)

Mogherini reiterated that the European Union remained committed to the Iran nuclear deal, from which the United States pulled out in 2018. This unilateral move was followed by batches of sanctions against the Islamic republic. Tehran, in its turn, partially suspended its obligations under the deal and began to enrich uranium beyond the level outlined by the JCPOA.

The US sent an aircraft carrier strike group to the Gulf in what it said was a "clear message" to Iran. Tensions escalated further after the detention of oil tankers in the Persian Gulf and the Gulf of Oman. The US accused Iran of attacking the tankers, while the latter denied the allegations, saying that Washington was looking for a pretext to fuel tensions in the area.

In July, the US suggested creating an international maritime coalition to "ensure the freedom of navigation" in the area. Only the UK and Australia have joined the coalition so far.