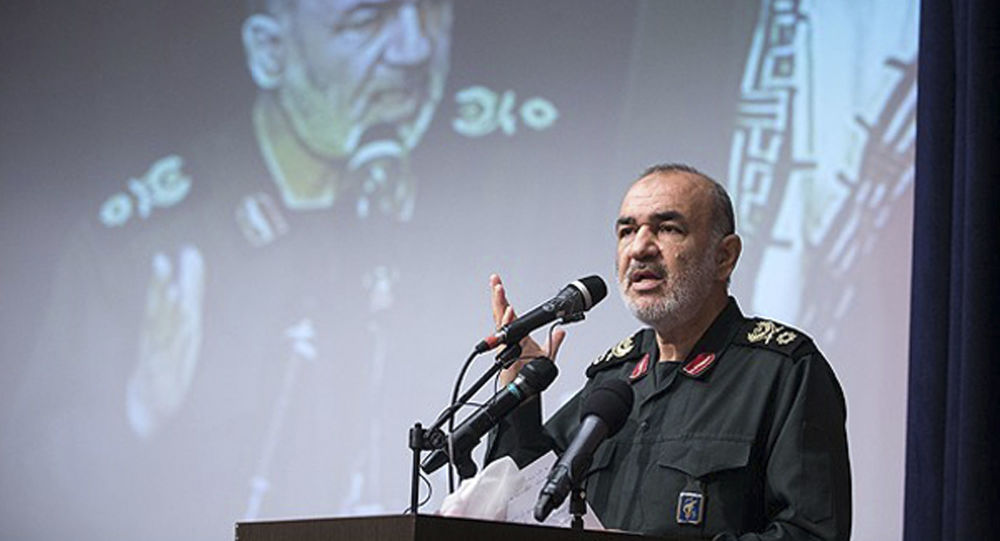 Hossein Salami, the commander of Iran's Islamic Revolutionary Guard Corps (IRGC), an elite sector of the country's armed forces, on Sunday slammed the United States as arrogant, saying that the non-spiritual US has brought "all its forces" to fight against the Islamic republic.

"The Global Arrogance [Western countries led by the US], a power unparalleled in human history, has mobilized all its forces. America is the greatest power in all aspects, and this power has brought all its might to the battlefield with the Islamic Revolution in Iran”, Salami said at the 9th Malek Ashtar festival, cited by the Mehr news agency.

Salami also noted, cited by Mehr, that the Americans are acknowledging that their leaders have no origins and are empty-minded and non-spiritual. In spite of this, the Islamic Republic of Iran - although it lacks economic and media power - when it moves, it strikes fear in the heart of those selfsame 'arrogant' powers.

Tensions have escalated in the Persian Gulf since the Trump administration withdrew last year from the 2015 Joint Comprehensive Plan of Action (JCPOA), also known as the Iran nuclear deal, and then hit Iranian petroleum industries with new sanctions, prompting Tehran to take advantage of treaty backstops to increase its supply of low-enriched uranium.

Trump designated the IRGC as a terrorist entity and, in response, the Iranian Supreme National Security Council accused the US government of supporting terrorism, recognizing the US Central Command as a global terrorist organization.

The situation has been exacerbated further after a series of mysterious attacks on oil tankers in the Gulf of Oman and the Strait of Hormuz, with Washington and its allies placing the blame on Iran and Tehran refuting the accusations.

Iranian Supreme Leader Ayatollah Ali Khamenei said that Iran does not intend to wage war with the United States but will continue to resist Washington.

Salami earlier said that Iran’s defence strategy would become offensive in the event of an "error on the part of the enemy".