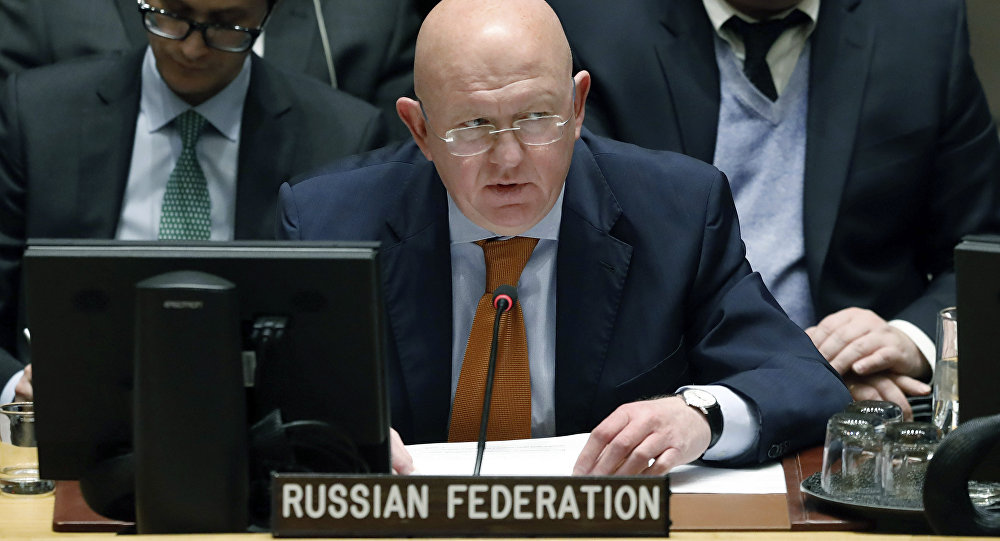 The Russian Ambassador to the United Nations, Vassily Nebenzia, told the UN Security Council on Tuesday that the Astana talks format is the only way to stabilize the situation in Syria, adding that Moscow and Ankara refuse to ignore ongoing terrorist attacks in the country.

In February, during a fourth summit between the countries-guarantors of the Astana process that was held in Sochi, Russian President Vladimir Putin discussed with Iranian and Turkish counterparts joint steps required for the long-term normalization of the situation in Syria.

Both Russia and Turkey, along with Iran, are the guarantors of the ceasefire in Syria, having signed the Astana agreements on the creation of Syrian deescalation zones in 2017.

Over the past several weeks, terrorists have increased the number of attacks in Syria's northwestern provinces, particularly in Idlib. Government forces have responded by increasing attacks on terrorist targets in the province.

Nebenzia stressed Tuesday that Idlib should return control to the Syrian government control and that remaining terrorists should be eliminated to prevent them from spreading to other regions, adding that Moscow rejects all accusations of indiscriminate attacks in Syria.

“We decisively reject any accusation of indiscriminate strikes, we are not carrying out attacks on civilians”, Nebenzia said.

Russia and Turkey, the envoy added, will not ignore terrorist attacks threatening Turkish territory and the Russian airbase in Hmeimim as well as Syrian military personnel and civilians.

"We note that ultimately this province [Idlib], like other territories of the Syrian Arab Republic should return to the control of the Syrian government and the terrorists have to be liquidated. There is a need not to allow terrorism to spill over from Idlib into other regions of Syria and further in the region", Nebenzia said.

The United Nations Security Council held an open session on Tuesday to discuss the escalation of violence in northwestern Syria. The meeting was requested by the so-called humanitarian troika on Syria, represented by Belgium, Germany, and Kuwait, in light of the uptick in violence in the Idlib deescalation zone.

Earlier in June, the troika attempted to adopt a statement calling for an immediate ceasefire in the Syrian province of Idlib; however, Russia used its veto power to block the initiative, which it called a biased approach to the situation in the country.

Most of the province of Idlib is controlled by Hayat Tahrir al-Sham (HTS), an alliance of jihadi groups led by al-Qaeda-linked Nusra Front terrorists.

Meanwhile, the Russian Centre for Reconciliation in Syria said Tuesday that over the past 24 hours, it had registered 11 ceasefire breaches in the provinces of Latakia and Hama within Syria’s Idlib deescalation zone.

"Over the past 24 hours, militants have carried out shelling attacks against the settlements of Shmaisa, Eyn-al-Naur, Mamuhiyah, Kermel, Hamrat, Safsafa, Kara-Jagez, and Ikko in Latakia province, as well as Jalama, Kafer-Yahut, and Khamamiyat in Hama province", the head of the centre, Maj. Gen. Alexey Bakin, said.

The centre distributed 1,000 food sets among the citizens of two settlements in the provinces of Deir ez-Zor and Aleppo. The Russian military added that 3,438 tonnes of humanitarian aid had been delivered to Syrians since the start of the settlement process.

Syria has been in a state of civil war since 2011, with government forces fighting numerous opposition groups as well as militant and terrorist organizations.

*Nusra Front, al-Qaeda, Hayat Tahrir al-Sham are terrorist groups banned in Russia and many other countries.