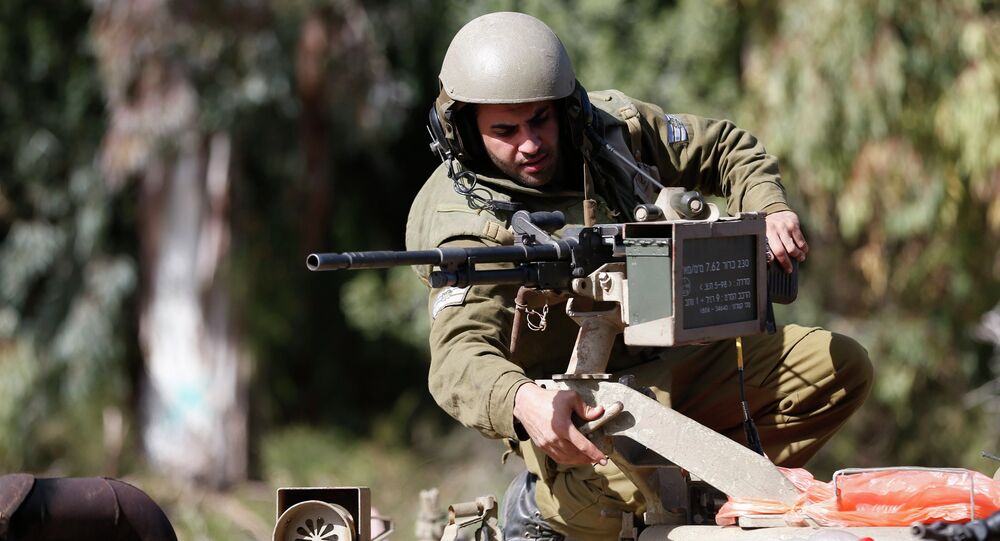 Tensions between Tel Aviv and Beirut have ramped up in recent months, with Israeli Prime Minister Benjamin Netanyahu suggesting Thursday that Israel could launch a military operation in Lebanon proper to detect and destroy alleged Hezbollah tunnelling activity.

The shots, said to have been fired east of the Lebanese village of Meiss ej Jabal, were fired amid Israel's ongoing operation to identify Hezbollah tunnels along the border area.

"The soldiers of hostile Israel opened fire into the air after being stationed near the Blue Line in the Qurum al-Sharqi area east of Meiss ej Jabal," the news agency said. The troops were said to have opened fire over a vehicle belonging to the Lebanese Army which was performing a routine patrol in the border area in conditions of heavy fog.

The Israeli military confirmed Saturday that it had fired shots along the border, but said that the gunfire was directed against suspected "Hezbollah activists."

"Troops fired towards the suspects in accordance with the standard operating procedures. The three [individuals involved] fled. The work in the area continues as usual," the military said in a statement cited by Reuters. The military said that the three individuals had approached Israeli forces on the Israeli side of the border.

Later Saturday, the Israeli military reported that they had found a second Hezbollah tunnel dug on the border area from Lebanon into Israel. "The Israel Defence Forces found a second tunnel dug by Hezbollah activists into Israel. This is another violation of UN Security Council Resolution 1701; we consider the Lebanese government responsible for what is happening on its territory," IDF public affairs spokesman Jonathan Conricus said.

Last week, Prime Minister Netanyahu said Israel may launch an operation inside Lebanon itself to destroy the network of underground tunnels allegedly used by Hezbollah to smuggle weapons and militants into Israel.

Lebanese officials have denied the tunnels' existence, calling on Tel Aviv to provide detailed, hard proof about the location of the alleged tunnels.

© AP Photo / Bilal Hussein
Israel Should 'Beware' of New War With Hezbollah - Lebanese Official
Tensions between Israel and Lebanon have escalated in recent months, with officials from both two countries warning about possible military clashes. Israel has accused Tehran of using Hezbollah as a "terrorist proxy" for a campaign of aggression against Tel Aviv. Iran has denied the claims.

Earlier this month, Hezbollah issued a video warning Israel against launching missile strikes on Lebanon, warning the Israeli government that "if you dare attack, you will regret it."

Films From Lebanon, Mexico Among Nominees for 2019 Golden Globe (VIDEOS)