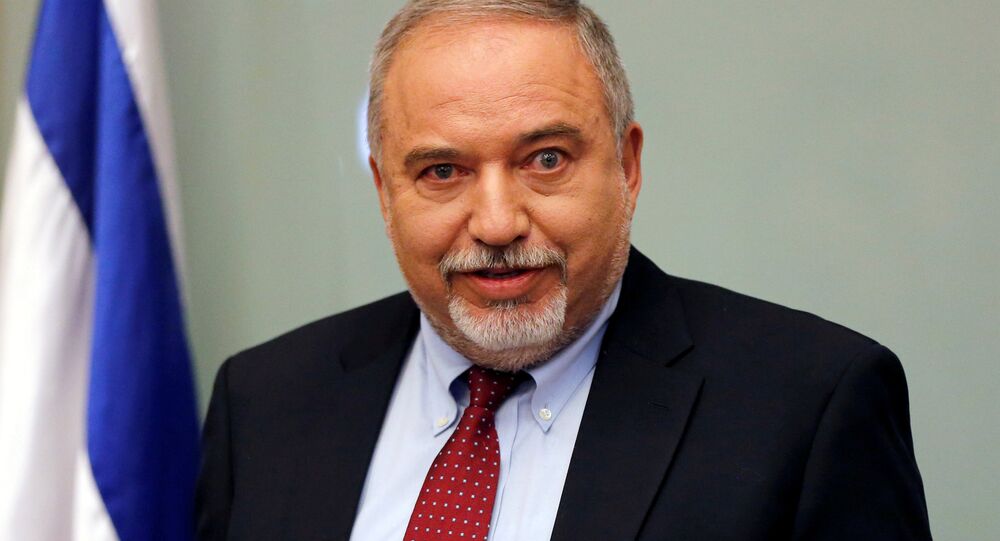 Lieberman stepped down as Israel's defence minister on Wednesday in an act of protest against Netanyahu's Gaza ceasefire, which he called a "capitulation to terror." This comes as yet another controversial statement in his more than two-decade-long political career - but perhaps not the most bombastic so far.

The 60-year-old Avigdor Lieberman entered the Israeli political arena in 1993, when he masterminded Netanyahu's Likud party leadership. He then became Likud's director-general and even founded his own right-wing party, Yisrael Beitenu, in 1999. Lieberman has occupied a number of ministerial posts, including in the ministry of foreign affairs, and has twice served as Israel's deputy PM. He had plenty of time to express his hardline views and launch fiery rhetoric — and has hardly missed a chance to do so.

The Palestinian Issue: Dare I Axe

Addressing a rally ahead of the 2015 Israeli legislative election, Lieberman said that the Arab Israelis that oppose the State of Israel should have their heads cut off.

"Those who are with us should receive everything. Those against us, it cannot be helped, we must lift up an axe and behead them — otherwise we will not survive here."

Paying Palestinians to Move Out?

Lieberman has long advocated the separation of Israeli Arabs and Jews. In November 2014, he suggested that Palestinians should be given money to move to a future Palestinian state.

"Those (Israeli Arabs) who decide that their identity is Palestinian will be able to forfeit their Israeli citizenship and move and become citizens of the future Palestinian state," he wrote in a statement on his Facebook page, adding that Israel should encourage Palestinians to move out through a "system of economic incentives."

A Call to Nuke Hamas?

As far as Hamas, Gaza's militant Islamist rulers, are concerned, Lieberman shows no mercy. Speaking at Tel Aviv's Bar-Ilan University in 2009, he said: "We must continue to fight Hamas just like the United States did with the Japanese in World War II. Then, too, the occupation of the country was unnecessary."

READ MORE: Lieberman's Resignation Far From Being a Victory for Hamas – Academic

These remarks came in an apparent nod to the atomic bombings of Hiroshima and Nagasaki by the United States in August 1945 — a move that is widely seen as decisive in pressuring Japan to surrender.

Mubarak Can ‘Go to Hell'

Avigdor Lieberman has made unguarded comments about Hosni Mubarak, once proposing a less hospitable alternative destination if the then-Egyptian President didn't agree to visit Israel.

"Time after time, our leaders go to meet Mubarak in Egypt, but he has never agreed to come here for an official visit as president. Every self-respecting leader would have made those meetings conditional on reciprocity. If he wants to talk to us, he should come here; if he doesn't want to come here, he can go to hell," he said at a Knesset plenary session in October 2008.

Both Israel's then-president Shimon Peres and prime minister Ehud Olmert apologized to Egypt for Lieberman's comments, saying that they did not reflect Israel's attitude toward Egypt.

Lieberman claimed in 2006 that Palestinian members of Israel's legislature who meet with members of the Palestinian Authority should be executed as collaborators. "World War II ended with the Nuremberg trials. The heads of the Nazi regime, along with their collaborators, were executed. I hope this will be the fate of the collaborators in this house," he told the Knesset.

In a 2006 interview, he made explicit comments about his priorities: "I very much favour democracy, but when there is a contradiction between democratic and Jewish values, the Jewish and Zionist values are more important."

In 2003, then-transportation minister Lieberman opposed Sharon freeing Palestinian prisoners as a concession to Mahmoud Abbas. Instead, he proposed to drown the detainees in the Dead Sea — much to the dismay of the Arab community.

"It would be better to drown these prisoners in the Dead Sea if possible, since that's the lowest point in the world."