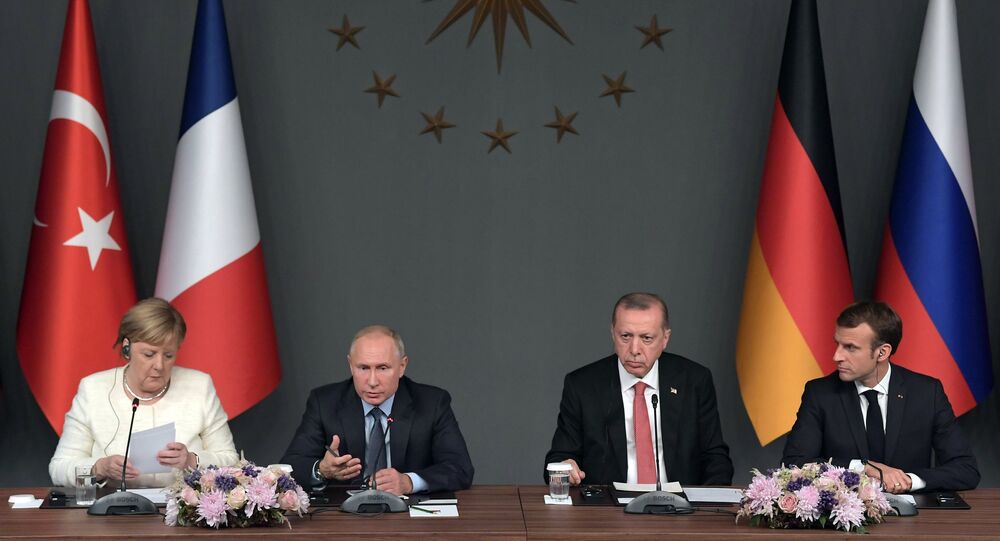 ISTANBUL (Sputnik) - Russian, Turkish, German and French leaders in a joint communique on Saturday reaffirmed their commitment to a negotiated political process as the only way of ending the Syrian conflict.

The four leaders "underlined their firm conviction that there could be no military solution […] and that the conflict could be resolved only through a negotiated political process," the statement read.

© REUTERS / Ammar Abdullah
Germany Sees Buffer Zone in Syria’s Idlib as First Step to Ceasefire – Spokesman
The four, in an official statement, noted that the political process must be "inclusive, Syrian-led and Syrian-owned," and stressed the UN's role as facilitator, while calling for active participation of Syrian parties. The four also said that they remained committed to the sovereignty, independence, unity and territorial integrity of Syria, and rejected separatist agendas aimed at undermining these four pillars.

They further emphasized the need to increase coordination among all international initiatives which aim at contributing to a credible and sustainable solution to the Syrian conflict.

On terrorism, the four leaders "expressed their shared concern on the risks and threats emanating from the conflict for regional as well as global security and stability."

The leaders observed that they were determined to "fight against terrorism in Syria in order to ultimately eliminate" Daesh and the Nusra Front, as well as other groups linked to Daesh or Al-Qaeda. On the demilitarized zone in Idlib, they welcomed the September memorandum between Turkey and Russia to establish a buffer zone and "commended the progress in terms of withdrawal of heavy weapons as well as radical groups."

© AP Photo / United media office of Arbeen
Moscow Ready to Provide EU Data on Chemical Attacks Violators in Syria - Envoy
They also stressed the importance of a lasting ceasefire in the region, "while underlining the necessity to continue the fight against terrorism, through the full implementation of the effective measures as foreseen in the Memorandum."

The leaders reiterated their "strongest opposition to the use of chemical weapons by any party" in Syria, and called for strict compliance with all relevant conventions.

On the constitutional committee, the four said that it should convene in Geneva by the end of the year to pave the way for free and fair elections under UN supervision and with the participation of all diasporas.

The statement called for more confidence-building measures, including the release of detainees and a handover of political prisoners, also demanding that aid agencies receive rapid access throughout the war-torn nation.

© REUTERS / Alaa al-Faqir
Militants, White Helmets Move Unknown Toxic Substances Across Idlib – Reports
In this regard, the statemnt called upon the international community, particularly the UN and its humanitarian agencies, to increase assistance to Syria.

The joint communique "highlighted the need to create conditions throughout the country for the safe and voluntary return of refugees," and commended host countries for their efforts.

The four leaders "expressed their commitment to working together in order to create conditions for peace and stability in Syria, encourage a political solution and strengthen international consensus in that regard."