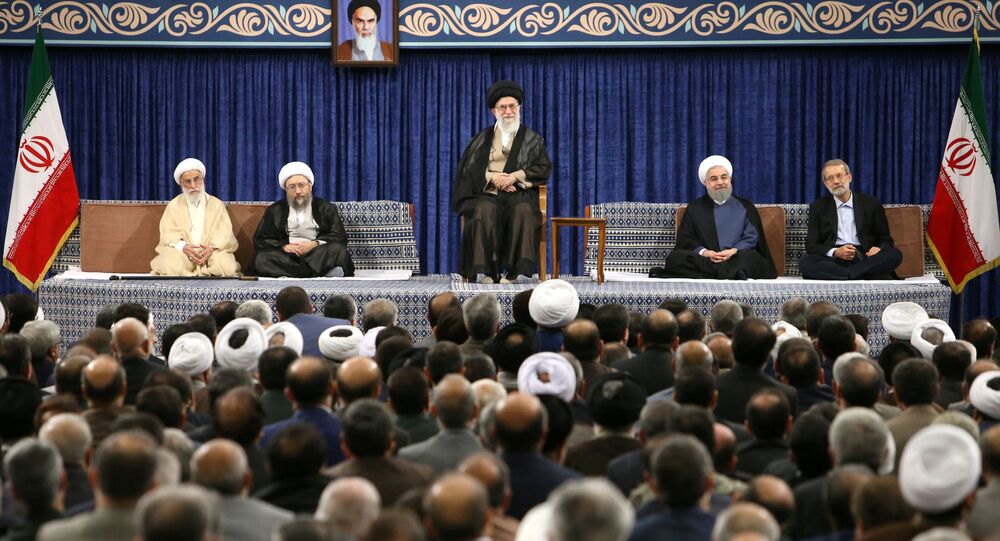 Iran’s Supreme Leader Ayatollah Ali Khamenei has delivered an address to tens of thousands of military brass at a Tehran stadium, touching upon the issues of economic obstacles in the country and problems with Washington.

During a televised speech, the Supreme Leader has lashed out at the US sanctions, saying Tehran will deliver a slap and defeat to the United States by defying Washington’s sanction policy.

© CC BY-SA 2.0 / Pete Markham / Huntington Beach Trip - Aug 2014 - Sunset over the oil rig.
Uncertainty Around US Sanctions on Iran Adds $5-$7 to Oil Prices - Russian Energy Minister
Ali Khamenei has also refuted the allegations that Iran will collapse within months under sanctions pressure, something that Donald Trump had said to EU leaders, according to Khamenei. He went on to say that Iranians are in a "sensitive" position because of the US threat and economic problems.

"Sensitive in this respect that on one hand we have the shouting of the arrogant powers and politicians of imperialist America…on another hand the economic problems of the nation and the tightness of the livelihood of a large portion of the weak people in the country."

© AP Photo / Sepahnews via AP
Tehran: Iran Sent US 'Signal' as Syria Missile Strike Was Mere Miles Away From American Troops
US-Iranian relations have deteriorated since President Trump's decision to pull out from the nuclear deal, also known as the Joint Comprehensive Plan of Action (JCPOA) in May and reinstate the previously lifted sanctions. While the first set of sanctions came into effect on August 7, the second package, concerning sales of oil and related products, is set to be reinstated on November 4.

The European Union has responded to the US move by announcing the establishment of a mechanism that would facilitate legitimate transactions with Iran, related to the country’s exports, including oil, and imports, amid the US sanctions.