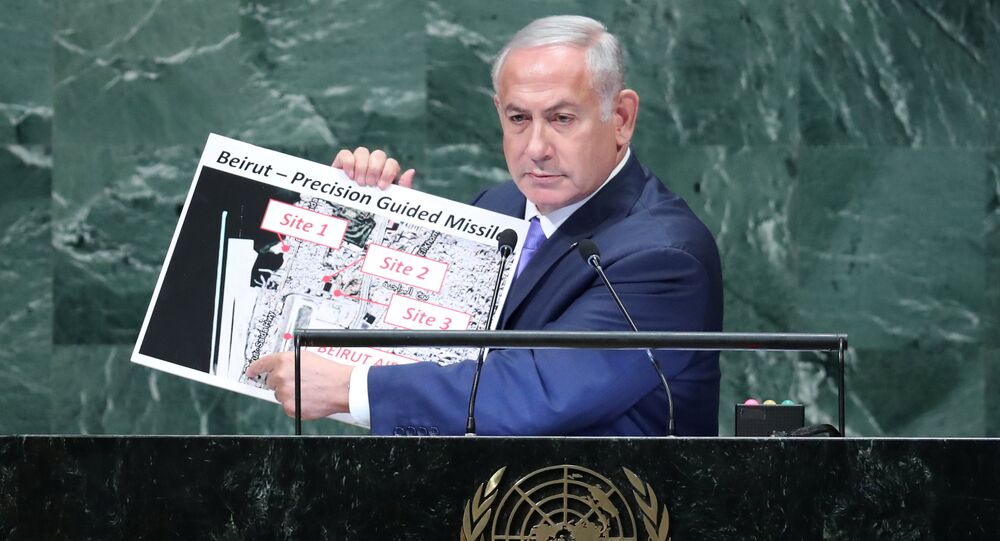 Beirut has responded to Israeli Prime Minister Benjamin Netanyahu's UN General Assembly speech, which included threats that Tel Aviv wouldn't let the Hezbollah militant group get away with efforts to build up an arsenal of precision-guided missiles.

In a scathing reaction to Netanyahu's speech, Lebanon's acting foreign minister Gebran Bassil suggested that Israel had forgotten its previous defeats at the hands of Lebanese forces.

"Here is Israel once again coming up with excuses to justify aggression and preparing to violate the sovereignty of other nations using the [UN] platform," Bassil tweeted.

"Israel has forgotten that Lebanon drove it out, defeated its aggression, and seems oblivious to the fact that its arrogance and 'new friends' will be of no benefit," the foreign minister added, referring to Prime Minister Netanyahu's remark about Israel gaining a new "intimacy and friendship" with other Arab states against Iran.

Netanyahu also implicated Iran with "directing Hezbollah to build" these secret sites in a bid to "convert inaccurate projectiles into precision-guided missiles…that can target deep inside Israel with an accuracy of 10 meters."

The Israeli prime minister's comments echoed remarks he made last week, when he warned that Hezbollah would be dealt a "crushing blow" if it tries to "confront" Israel.

© REUTERS / Aziz Taher
Lebanon's President Accuses Israel of Trying to 'Split' the Middle East
Relations between Israel and Lebanon bottomed out earlier this year, with officials from both countries openly talking about the possibility of military conflict. Israeli plans to build a wall along Lebanon's southern border, Tel Aviv's ongoing occupation of Lebanon's Shebaa Farms since the 1967 Arab-Israeli War, disagreement over a gas field in the eastern Mediterranean Sea, and the Israeli suspicion that Iran is providing substantial military support to Hezbollah have all played  a role in state of relations. The last conflict between the two countries took place in 2006, when the Israeli military launched an invasion of Lebanon in response to a cross-border raid by Hezbollah and the abduction of two Israeli soldiers. The conflict lasted for 34 days and claimed the lives of over 1,300 people. The conflict was halted by a UN-brokered ceasefire.
...
Reddit
Google+
Blogger
Pinterest
StumbleUpon
Telegram
WhatsApp
311