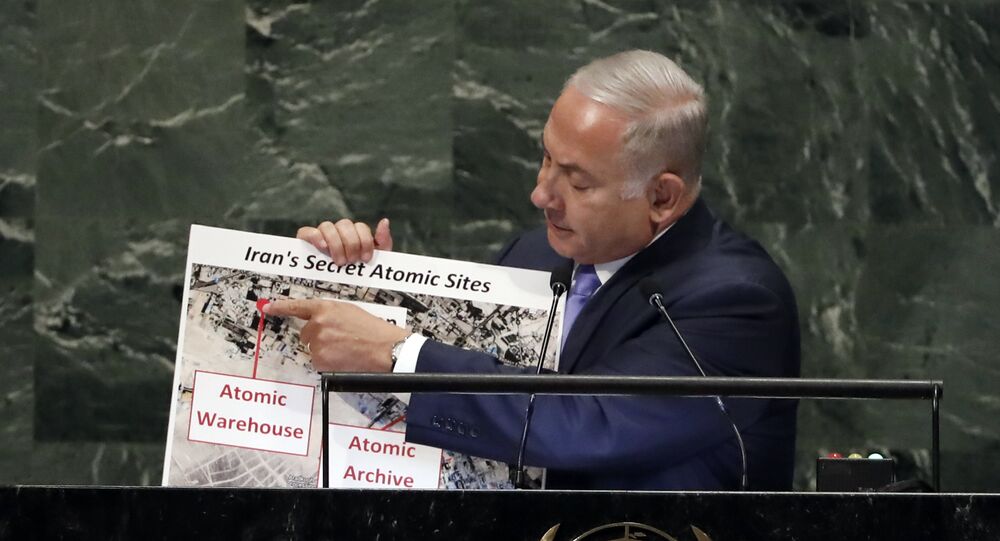 Prime Minister Benjamin Netanyahu made fresh allegations about Iran's alleged nuclear program during his speech to the UN General Assembly on Thursday.

"Today I am disclosing for the first time that Iran has another secret facility in Tehran, a secret atomic warehouse for storing massive amounts of equipment and material for Iran’s secret nuclear weapons program," Netanyahu said.

"Just last month, they removed 15 kilograms of radioactive materials" from this facility, Netanyahu added, claiming that this material has been spread around Tehran, endangering the city's residents.

According to the prime minister, this second site could have contained as much as 300 tons of nuclear-related materials.

"Why did Iran keep a secret atomic archive, and a secret atomic warehouse?" Netanyahu asked. According to the Israeli leader, it's because it has not abandoned its nuclear weapons ambitions.

"What Iran hides, Israel will find," Netanyahu boasted, urging the IAEA to inspect this alleged secret warehouse and other facilities uncovered by Israel. "Once and for all, tell the world the truth about Iran," he urged.

"Israel will do whatever it must do to defend against Iran's aggression," Netanyahu added, noting that Israel would act against Iran in Syria, Lebanon and even Iraq, "wherever" is needed "to defend our state and our people."

Netanyahu accused the supporters of the landmark 2015 Joint Comprehensive Plan of Action nuclear deal of being naive about Iran's intentions and the implications of sanctions relief, suggesting Iran has used its weapons "to fuel its vast war machine" instead of improving the lives of ordinary Iranians.

Ultimately, Netanyahu argued, "this deal did not push war further away. It brought war ever closer to our borders." As evidence, the prime minister pointed to alleged Iranian attacks against Israel from Syria and the Gaza Strip.

The prime minister claimed that Iranian actions in Lebanon included the provision of precision missile technology that Hezbollah might use to strike Israel. The prime minister charged Hezbollah with using Beirut's citizens as "human shields" by placing missile installations near civilian areas, including, allegedly, Beirut's international airport.

"I have a message for Hezbollah today. Israel also what you're doing, Israel knows where you're doing it, and Israel will not let you get away with it," Netanyahu warned.

Call on World to Join US-Led Sanctions on Iran

Netanyahu claimed that the nuclear deal's supporters were "dead wrong" about the limited economic impact of restored US sanctions against Tehran. "A year ago, Iran's economy was booming. Now it's collapsing," the prime minister boasted, pointing to the recent drop in the value of Iran's currency, the withdrawal of Western companies fearing secondary US sanctions, and other issues.

Netanyahu encouraged Europe's leaders and others to join new US sanctions against Tehran "instead of coddling Iran's dictators."

The prime minister said the Iran deal did have one positive consequence for Tel Aviv, which was the consolidation of Israel's relations with the Arab world against Tehran. Such "intimacy and friendship" was something Netanyahu said he had "not seen in my lifetime, and [which] would have been unimaginable a few years ago."

On Wednesday, Iranian President Hassan Rouhani praised world leaders who rejected the US's reimposition of unilateral sanctions, saying that other countries considered the decision "a mistake," and adding that "sooner or later, the US will return to the nuclear deal." Tehran, Rouhani said, wants the US to "return to what is legal and stand by the UN security Council resolution" on the JCPOA, and to "stop bullying" the country.

Cheers for US Support, Jeers for UN Agencies

Praising President Trump's unwavering support for Israel at the UN, Netanyahu attacked a "morally bankrupt" UNESCO, and an "unreformed UNRWA," which he said has "absurdly accused" Israel of racism. "Here at the UN, Israel is shamefully accused of Apartheid," the prime minister said, pointing to the existence of minority rights for Palestinians. "It's the same old anti-semitism with a brand new face," he said of such arguments.