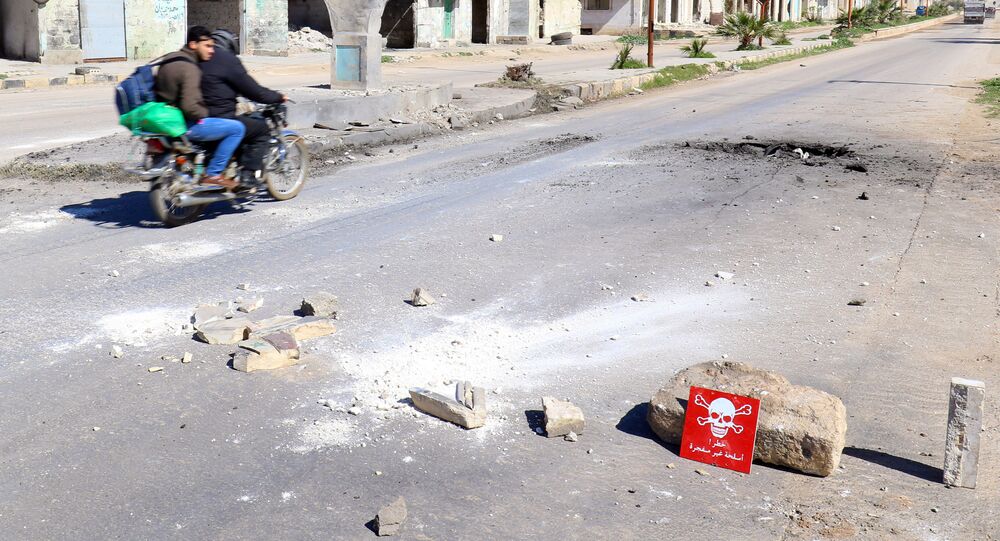 As the Russian Center for Syrian Reconciliation reported, all the fake footage of "chemical attacks," designed to facilitate the implication of Syrian government forces, is expected to be sent to different TV channels before the end of the day.

"According to the information received from inhabitants of Idlib province, militants are now filming a staged provocation in the city of Jisr al-Shugur, where "chemical weapons" are depicted as being used by the Syrian army against civilians. The film crews of several Middle Eastern TV channels arrived in Jisr al-Shugur in the morning, as well as the regional affiliate of one of the main American television news networks," the Reconciliation Center said.

The Russian military added that the militants had brought two containers loaded with a chlorine-based toxic substance to Jisr al-Shughur to make the provocation seem "natural."

© AFP 2021 / Anas AL-DYAB
Turkish Defense Minister Calls for Halt of Military Operations in Idlib
According to the center, all videos of provocations shot in Jisr al-Shughur will be handed to broadcasters by the end of the day after being released via social media.

Later in the day, Syrian human rights activist and public figure Ammar Jamal has confirmed to Sputnik that a group of 30 representatives of the White Helmets had arrived to Idlib to organize a provocation. According to human rights activists, the White Helmets arrived on Tuesday morning with tanks with an unknown gas. At the moment, they are located on a grain storage site.

The information follows Sunday's Wall Street Journal report that the US Defense Department might be mulling the idea of striking Russian or Iranian military forces aiding the Syrian government if they were to launch an assault on Idlib. The report added that the United States would specifically decide whether to strike Russian air defense installations.

Meanwhile, the Syrian government has pledged to drive the remaining terrorists out of Idlib and has begun taking steps toward full-scale military operations in the territory.

READ MORE: Success of Initiative on Truce in Idlib Relies on Turkey's Actions

© AFP 2021 / Mohamed al-Bakour
US, Allies Agree to 'Stronger Response' if Syria Uses Chemical Weapons - Bolton
The Russian Ministry of Defense warned about the forthcoming false flag provocation, which will involve a staged chlorine gas attack, on August 26. Later, the ministry said that the results of this provocation could be used by the Western coalition forces as an excuse to launch another missile strike against the Syrian government. The United States, the Russian Defense Ministry noted, has been deploying the relevant forces to Syria. In late August, the American destroyer USS The Sullivans arrived in the Persian Gulf carrying 56 cruise missiles, and a US Air Force B-1B strategic bomber, equipped with 24 air-to-surface JASSM cruise missiles, was redeployed to El-Udeid Airbase in Qatar.

If coalition forces strike, it won't be the first time they will have targeted Syrian government positions after citing alleged chemical attacks by the Syrian government. On April 14, the United States, the United Kingdom and France launched over 100 missiles at multiple targets in Syria in response to an alleged chemical weapons attack in the Eastern Ghouta city of Douma that reportedly took place on April 7. The Syrian government has denied using chemical weapons and said that the Jaish al-Islam terror group staged the attack in order to summon a foreign intervention in the country.