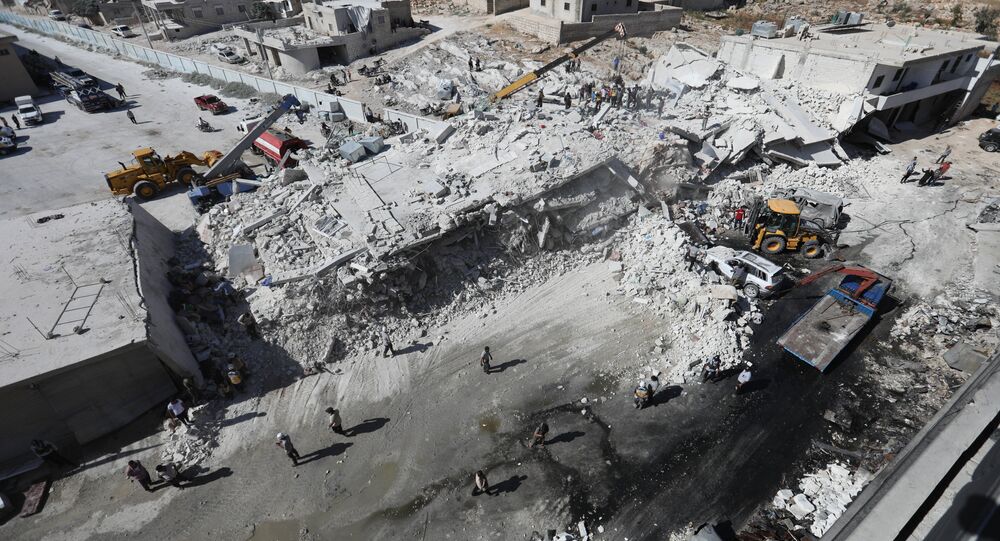 MOSCOW (Sputnik) - The future of the initiative on a truce in Syria's Idlib, announced earlier on Friday by Turkish President Recep Tayyip Erdogan, depends to a large extent on Ankara's actions and will to bring the proposal into life, experts told Sputnik.

© AFP 2021 / George OURFALIAN
WATCH Syrian Army Conducts Military Op on al-Safa Volcanic Plateau
During the negotiations, Erdogan proposed to declare a ceasefire in Idlib and insisted on the inclusion of this clause in the final text of the leaders' joint statement. The Russian president, for his part, noted the appropriateness of Erdogan's proposal but argued that the three leaders could not undertake any obligations on behalf of various militant groups, whose activities serve as the main obstacle to the establishment of the ceasefire regime in the area.

As a result, in the final statement the proposed truce was not mentioned but a softer formulation saying that the ceasefire guarantor states "took up the situation in Idlib de-escalation area and decided to address it in line with the above-mentioned principles and the spirit of cooperation that characterized the Astana format" was used.

The province of Idlib is mostly controlled by armed opposition and terrorists rather than Syrian government forces. Russian officials have recently warned that there was a possibility of a staged chemical weapons attack in the area, aimed at blaming Damascus and provoking Western countries into retaliating against the Syrian government.

© Sputnik / Mikhail Klimentyev
Putin: Terrorists in Syria's Idlib Preparing Provocations, Including With Chemical Weapons
Jean-Vincent Brisset, a senior research fellow at the French Institute for International and Strategic Affairs (IRIS), in his comments to Sputnik confirmed the feasibility of the proposal for a truce in Idlib, adding, at the same time, that Turkey would play an important role in its implementation.

"Ceasefire in Idlib is not impossible. Three major actors are united, but the question is whether someone will put fuel on the fire now. This does largely depend on Turkey," Brisset indicated.

He explained that unlike Russia and Iran, whose interests in Syria are clear enough, for Turkey its presence in Syria served as a source of contradictions and problems.

"Whatever happens will oblige Turkey to abandon certain positions it has taken," Brisset believed.

Tarek Ahmad, a representative of the Syrian Social Nationalist Party (SSNP), stated in an interview with Sputnik that Turkey's assistance was required to find a permanent solution in Syria and destroy the last strongholds of terrorist groups in Idlib.

"The Turkish help is very needed in this issue, and I hope Erdogan will act rationally and in everyone's interests," Ahmad said.

© AFP 2021 / Anas AL-DYAB
Most of Syria's Idlib De-Escalation Zone Still Controlled by Militants – Moscow
According to Ahmad, Turkey's current strategy for Syria and proposal for Idlib contradicted the US plans in the region since they threatened to create a new geopolitical reality in the region.

"The Turkish-US relations are at their worst, that is why Turkey needs an agreement with Russia and Iran. It seems that Erdogan is working on a new geopolitical curve, when it comes to its role in Idlib, to its relations with the West and NATO, and the solution for Idlib will create a new geopolitical reality in the Turkish-Western relations… The United States and its regional partners would be politically hurt by it," Ahmad said.

Brisset, in turn, was more optimistic about the West's possible reaction to the initiative, saying that the suggested truce in Idlib might prove good for the Western countries.

"Now whether the Western partners will accept that it works or whether they will hamper it — this is a question. There are directly visible provocations and reactions, and then there are things which can be done through hidden operations," Brisset pointed out.

Brisset, however, did not rule out the possibility of attempts by the United States or Israel to provoke some incidents on the ground in Syria to hamper the truce establishment in Idlib.