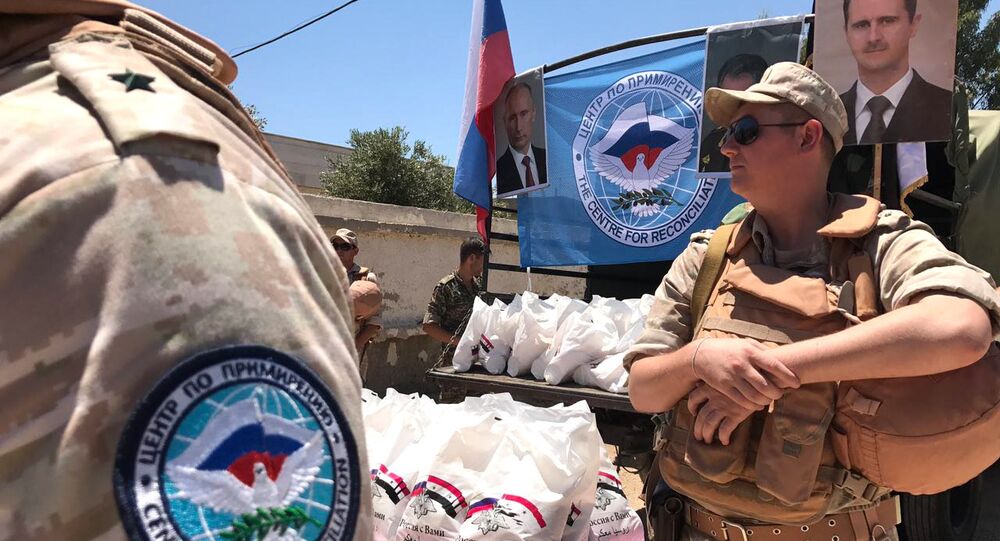 SOCHI (Sputnik) - The summit of the Syrian guarantor states - Russia, Turkey and Iran - is likely to take place after the meeting of the Russian, Turkish, German and French leaders scheduled for September 7, Russian Presidential Special Envoy for Syria Alexander Lavrentyev told Sputnik.

On Sunday, Turkish President Recep Tayyip Erdogan said that the leaders of Turkey, Russia, Germany and France would meet in Istanbul in early September to discuss, among others, the agenda of the trilateral summit of Turkey, Russia and Iran on Syria.

"I think that we will probably have no time to prepare the meeting of the presidents of the three guarantor countries in Tehran by September 7. Most likely, it will be a bit later, because our president also has a very busy schedule of international meetings, and he should be carefully prepared," Lavrentyev, who led the Russian delegation at the Astana-10 talks on Syria in the Russian resort city of Sochi, said.

© Sputnik / Dmitriy Vinogradov
Russian Air Defenses in Syria Shoot Down Drone Launched by Militants
Delegations of the Syrian ceasefire guarantor states, as well as of the Syrian government, the Syrian opposition and the United Nations participated in the 10th round of negotiations on the Syrian problem in the Astana format, which took place on Monday and Tuesday in Sochi.

Russian Presidential Special Envoy also said that the summit, slated to take place in Istanbul in September, will mainly focus on the Syrian crisis settlement.

“The issue of the Syrian settlement is likely to become one of the central topics. Probably, the issue of providing [humanitarian] assistance to refugees staying on the Turkish territory will be also covered, since there are 3.5 million of them there,” Lavrentyev,  who led the Russian delegation at the Astana-10 talks on Syria in the Russian resort city of Sochi, said.

According to Lavrentyev, the process of returning refugees is also expected to be on agenda.

“I think, [the sides] will touch upon the return of refugees, [humanitarian] assistance from Germany and France, as European financial engines, and the facilitation of this process. We very much hope for that,” he added.

© AP Photo / Hussein Malla
Syrian Kurds, Gov't Agree to Work Towards 'Decentralized Syria' - Reports
Moreover, Russia is acting on the Syrian reconciliation in an open manner and in coordination with the Syrian government, respecting the interests of the neighboring countries, including Israel, Russian Presidential Special Envoy for Syria told Sputnik.

"We are doing nothing behind one's back, we are informing Damascus about all our activities. We are acting jointly because we hope for the full support of Damascus, incumbent authorities on further democratization of the [Syrian] society, launch of the political process and implementation of the constitutional reform," Lavrentyev said in an interview.

Lavrentyev pointed out that Russia was not trying to reach any secret "package deals" in Syria with other countries.

Meanwhile, the first reaction of Washington to Russia's humanitarian efforts in Syria was positive, but it takes time to assess the US response, because due to internal political problems in the United States, the actions of President Donald Trump, somehow correlating with the position of the Russian side, cause rejection in Washington, Russian Presidential Special Envoy for Syria said.

© REUTERS / Sana/Handout
At Least 144 Killed in Terrorist Attacks in Southwestern Syria (VIDEO)
Washington "is getting into fever" every time when the incumbent president is taking steps, which allegedly correlate with the position of the Russian side, Lavrentyev noted.

"The initial reaction was interested… but, apparently, some time is needed, due to internal political reasons as [such steps]… cause absolute rejection of a certain part of the US establishment. It is not very good, on the one hand, it may be even scary. We will be working on this and look into the situation," Lavrentyev, who led the Russian delegation at the Astana-10 talks on Syria in the Russian resort city of Sochi, said.

The changing situation on the ground in Syria should not influence the activities of the future constitutional commission, Russian Presidential Special Envoy for Syria Alexander Lavrentyev told Sputnik on Tuesday.

"The situation [on the ground] is really changing for the better, it may further continue changing. However, I believe that it must not affect the activities of the constitutional committee, when it is set up. I realize that the process is likely to be very difficult, certain participants may withdraw their candidacies, the new ones may be included in the constitutional committee. But I believe that, on the whole, this process has a good prospect. The work is underway," Lavrentyev, who led the Russian delegation at the Astana-10 talks on Syria in the Russian resort city of Sochi, said.

© AFP 2021 / THAER MOHAMMED
US, Israel Want White Helmets Out of Syria to Prevent Exposure – Ex-CIA Officer
Meanwhille, Russia believes that Israeli concerns over the presence of pro-Iranian forces near its border with Syria are decreasing, Alexander Lavrentyev told Sputnik.

"Yes, of course, we are certain of this," Lavrentyev said answering a question as to whether Israel was becoming less concerned over the pro-Iranian units' presence near its frontiers.