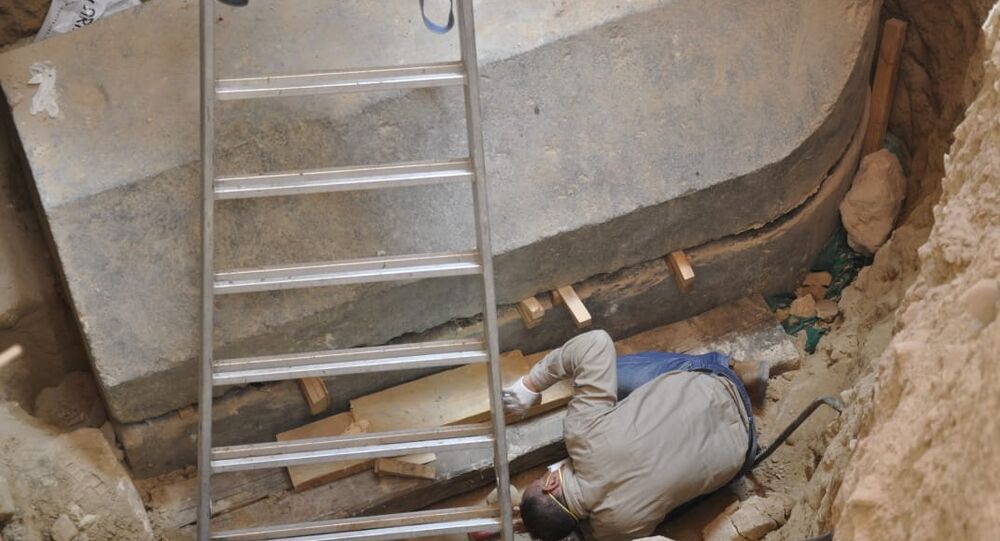 A sealed black sarcophagus, the largest ever found in the Egyptian city of Alexandria, was opened Thursday amid heavy speculation about whose remains were inside – and just as much lighthearted worry about a curse being released.

"The sarcophagus has been opened, but we have not been hit by a curse," declared Secretary-General of Egypt's Supreme Council of Antiquities Mostafa Waziri on Thursday, Egypt Today reported.

​While officials at Egypt's Ministry of Antiquities told National Geographic they were "exasperated" by all the questions and speculation about who and what lay inside the sarcophagus found July 1, the actual result turned out to be rather anticlimactic. There were no inscriptions, no cartouche and no objects found inside the coffin that would suggest the bodies inside belonged to members of an ancient royal family — or indeed suggest who the bodies belonged to at all.

That's right: bodies, plural. Archeologists found three mummies in an advanced stage of decay inside, with little more than their bones left.

​In photos obtained by the Luxor Times, the bones and wrappings float in a brown, murky fluid. Waziri explained to the press that the reddish liquid was sewage water that had leaked inside the coffin through a crack, destroying the interior despite the lid being sealed with mortar, indicating it had never been opened since its burial.

The sarcophagus was found July 1 in a construction site about 5 meters deep on Al-Karmili Street in the Sidi Gaber district of Egypt's coastal metropolis of Alexandria. The sarcophagus, made of black granite, has a height of 185 cm, length of 265 cm and width of 165 cm, and weighs an astonishing 30 tons. Officials also found an alabaster bust, which they believe belonged to the owner of the tomb.

The three weeks since the tomb's discovery have been full of speculation about who was inside. The size and location of the sarcophagus suggested to some that it could belong to Alexander the Great, the 4th century BC Macedonian general-king who conquered the Persian Empire and founded the city of Alexandria at the mouth of the River Nile as the capital of his new empire. Alexander died in 323 BC in Babylon near modern-day Baghdad, but his body was displayed in Alexandria after his death. What happened to it after that, though, is not recorded in history. Speculation by historians places Alexander's final resting place either in the city of his namesake, or perhaps in Babylon (meaning the public display story is a lie); or maybe he was transported back to the Macedonian city of Pella and buried next to previous Macedonian kings. Nobody knows for sure.

After Alexander died, his empire was divided up by his leading generals, and Alexandria came under the rule of the Ptolemies, who set themselves up as the latest dynasty of Egyptian pharaohs. Scientists also thought the sarcophagus might belong to one of their line, since there was no settlement in the area before Alexandria was founded. However, others told National Geographic that it might have been an older tomb that was transported from the south and reinterred, perhaps from the much older capital of Memphis.

Another Egyptologist told the outlet it might have been a later burial, from the time when Egypt was known as Aegyptus, a province of the Roman Empire, since the tomb was found away from the old city and thus unlikely to belong to an Egyptian royal.

So who were the folks inside? They were soldiers once, it appears.

​The skulls belong to three men. One skull has multiple fractures, indicating it had been hit by a sharp object and belonged to a warrior. The other two skulls are intact, the Ministry of Antiquities said. The ministry speculated in a Facebook post Thursday that they were probably military officers. They will use x-rays and other equipment to reconstruct the men's' faces and determine their ages.

The governor of Alexandria, Mohamed Sultan, told Egypt Today that the three mummies will be moved to the Alexandria National Museum and the coffin to the Military Museum.

Meanwhile, the military is trying to remove the massive sarcophagus with a bulldozer and has cleared the area around the construction site to prepare for the endeavor.

In an interview with Egypt Today, Waad Abul-Ela, head of the projects sector at the Ministry of Antiquities, suggested they would remove the coffin by surrounding it with protective fill dirt and then lifting it with a bulldozer.