Citing a source from Iraq’s Falcon’s intelligence cell, AFP reported that Hudayfah al-Badri had been killed in Russian airstrikes on Homs. The Russian military had reportedly fired three missiles at a cave, in which 30 terrorists, including Baghdadi’s son, were hiding.

“Badri wasn’t even a fighter… he was an icon that was moved from one place to another as a form of psychological propaganda for the rest of the organization,” AFP cited the Falcons as saying, adding that 11 militants had been killed during the attack on the terrorist shelter. 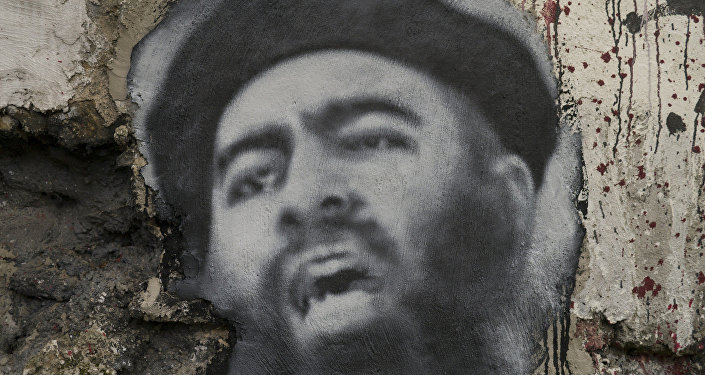 © CC BY 2.0 / thierry ehrmann / Abu Bakr al Baghdadi, painted portrait P1040030
Daesh Head's Son Killed in Militants' Attack on Syrian Forces – Reports
The telegram channel Directorate 4 previously stated that al-Badri was eliminated during an offensive by militants on the positions of Syrian and Russian forces located near a power station in Homs province.

Daesh leader Abu Bakr al-Baghdadi has been pronounced dead on numerous occasions, but is believed to still be alive, an Iraqi intelligence official said in May. The self-proclaimed caliph is said to be in a region controlled by the terrorists, on the border east of the Euphrates River.

Back in 2014 the terrorist group declared a cross-border “caliphate” in Iraq and Syria, capturing vast territories during extensive offensives on both war-ravaged countries.

Following a series of sweeping counter-terror operations, the Syrian government and Russia, as well as the US-led coalition and the Iraqi authorities managed to liberate over 90 percent of the territory Daesh had seized.