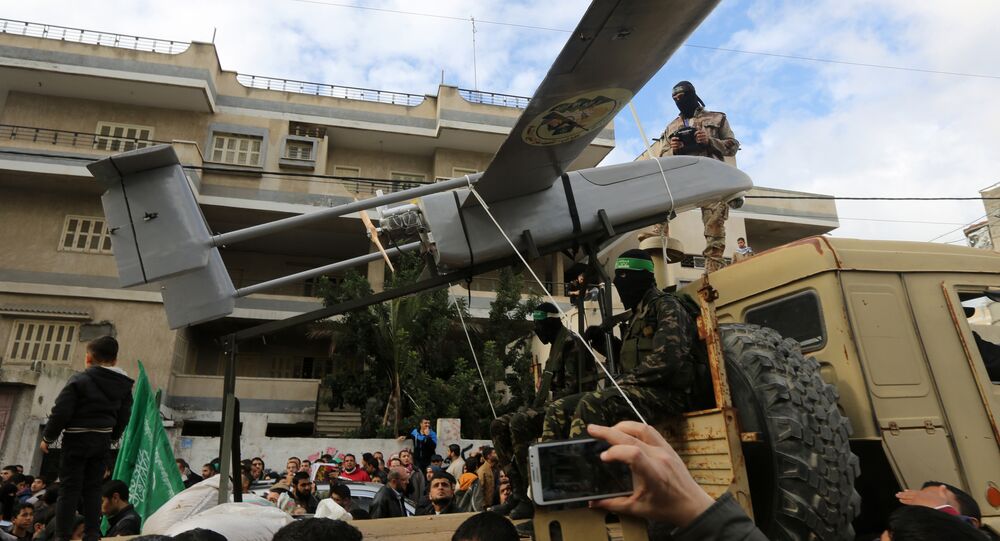 The IDF announced Sunday that a drone, rigged with explosives, flew over the border from the Gaza Strip into Israeli territory last week, the Times of Israel reported.

According to the story, the drone crashed and was recovered in the Sha'ar Hanegev Regional Council, in the northern Negev, "several days ago."

The drone was said to have been recovered in one piece, according to the IDF, and an investigation into the incident has been opened. An IDF spokesperson declared that the drone was rigged with explosives to harm border patrols, but malfunctioned.

© AP Photo / Baz Ratner
Two Killed as Israeli Army Shells Hamas Target in Gaza
Just hours before this announcement, the IDF announced that it had deactivated an explosive wired to a border fence. The bomb reportedly was disguised to look like a set of bolt cutters. Earlier in February, Israeli military reported a similar explosive device disguised as a flagpole, stuck in a border fence. When the soldiers tried to remove the object, it detonated.

Earlier in May, some 300 burning kites were flown from Gaza across the Israeli border sparking several small fires in Israeli fields, the Times of Israel reported. Israeli military stated that they were forced to enlist civilian amateur drone racers to help fighting a ‘kite terror', Haaretz reported May 13.

Israel considers Hamas, which controls the Gaza Strip, responsible for the deadly attacks, IEDs and other forms of violence on the Gaza Border. Violent clashes sparked between Palestinians and Israeli soldiers in May during the so-called Great March of Return.

Israel claims that most of those killed in the clashes — including unarmed marchers, the elderly, a teenager, a journalist and a doctor — were members of Hamas, a political organization it claims is a terrorist group.