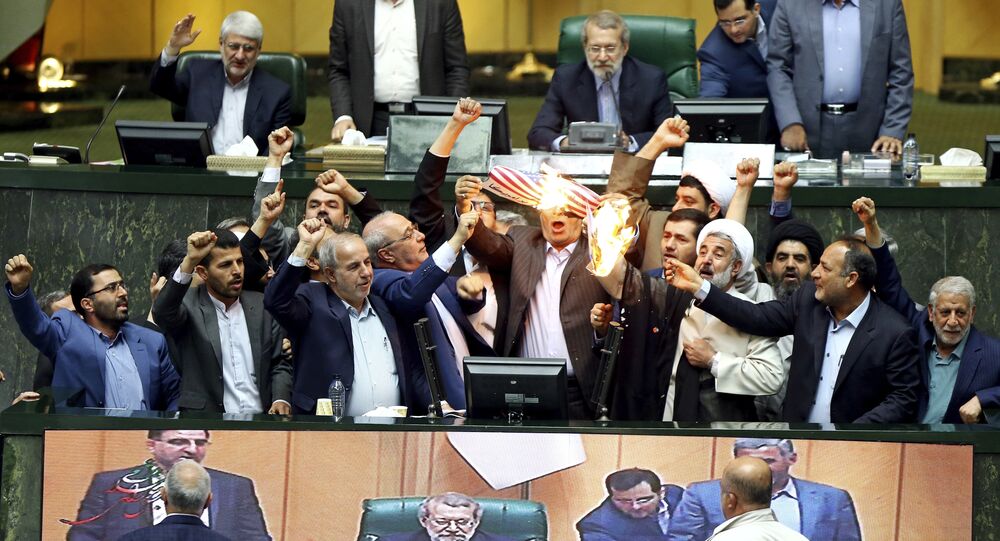 Previously President of the European Commission Jean-Claude Juncker stated, that Europe must replace the US as a global leader after president Trump had announced his decision to withdraw from the Iran nuclear deal.

"Europe cannot act independently over the nuclear deal," Brigadier General Hossein Salami the deputy head of the elite Iranian Revolutionary Guards (IRGC) said, according to the semi-official Fars news agency, after Britain, France and Germany said they remain committed to the deal.

Salami also added that Iran's enemies want to pressure the country by means of economic sanctions, and "Resistance is the only way to confront these enemies, not diplomacy".

© AFP 2020 / JALAA MAREY
'If It Rains on Us, It'll Storm on Them': Lieberman Warns Iran After Israel's Massive Attack in Syria
At the meantime, Iranian Foreign Minister Javad Zarif has agreed to hold expert and ministerial level meetings about the nuclear deal after a separate phone calls with his British and French counterparts, Boris Johnson and Jean-Yves Le Drian.

"In their phone talks, the three top diplomats also agreed to hold meetings at the level of experts as well as ministers," the statement of the Iranian Foreign Ministry read.

This comment follows the statement by Iran's Supreme Leader, Ayatollah Ali Khamenei, who said last Wednesday, that he doubted the ability of European countries to safeguard Tehran's interests.

The US President Donald Trump declared on May 8, that the US would withdraw from the Joint Comprehensive Plan of Action (JCPOA), an international agreement on Iran's nuclear program reached in 2015 by Iran, the United States, Russia, France, China, Great Britain, Germany and the EU in order to secure peaceful nature of the Iranian nuclear program. For a long time, Trump was a harsh opponent of the deal, calling it "the worst" and "defective at its core."