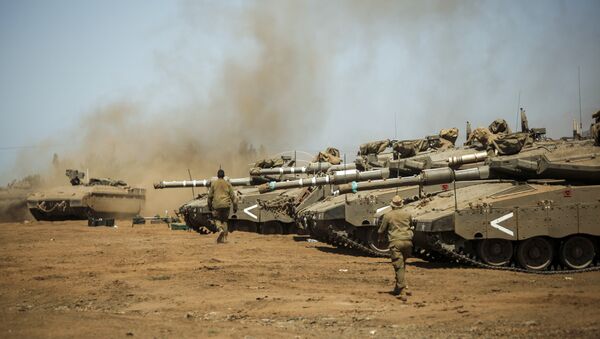 TEL AVIV (Sputnik) - The Israeli army on Thursday blamed Tehran for provoking an overnight raid on Iranian positions in Syria with a salvo at the Golan Heights under Israeli control, but said it did not want an escalation.

"We remain on high alert and vigilant, and we monitor Iranian activity in Syria," military spokesman Jonathan Conricus told reporters. "We do not want to escalate the situation, but we will respond to a new Iranian attack, we are ready to give a powerful response. We caution the Iranians against it."

Meanwhile, Israel's Defense Minister Avigdor Lieberman said that Israel's forces struck "nearly all the Iranian infrastructure in Syria" and said that no objects were hit on the territories of Israel. He went on to warn Iran against launching attacks on Israel.

"They need to remember the saying that if it rains on us, it'll storm on them. I hope we've finished this episode and everyone understood," Lieberman added, stressing that Israel doesn't want an escalation, but "won't let anyone attack us or build an infrastructure to attack us in the future."

Israeli warplanes raided Iranian positions in Syria overnight, firing dozens of rockets into the Syrian territory in response to a barrage of Iranian rockets, the Israeli army said Thursday.

The Israeli army said all jets that took part in the raids had returned to their bases. The Iranian salvo that prompted Israeli retaliation did not cause any casualties, it added.

The attack destroyed an Iranian military camp north of the Syrian capital, arms depots at the Damascus airport, and a car-mounted mobile launcher that was used to strike at Israeli positions near the border with Syria, the army said.

Moreover, Israeli planes targeted Syrian anti-aircraft batteries that fired at them during the overnight raid on Iranian positions in Syria, the Israeli army said.

The Israeli Defense Forces said they had informed Russia of the planned airstrikes on Syria.

"The Russians were informed prior to the attack through the existing mechanism," Israel's Jonathan Conricus told reporters at a briefing.

The military communication channel was set up between Israel and Russia in fall 2015 to prevent erroneous engagements in Syria.

Conricus said Syrians had ignored demands by the IDF to stop the artillery fire and allow the air raid against Iranian targets to go ahead. He identified the attacked air defense systems as SA-5, SA-2, SA-22 and SA-17, using NATO code names.

IDF Spokesman added that the alleged Iranian strike from Syria has proved that Iran posed a threat to Israel and regional stability. IDF representative noted that Israeli army would not allow the "Iranian threat to establish itself in Syria" and would hold Syria accountable for any future provocations.

French President Emmanuel Macron urged Israel and Iran to "de-escalate" tensions after the Israeli forces hit what they called were Iranian targets in Syria's Golan Heights following the alleged attack of Tehran through Syrian territory.

"He calls for a de-escalation", the presidency said in a statement, stressing that Macron would discuss the issue with Angela Merkel when he meets with the German chancellor in Aachen, western Germany, later in the day.