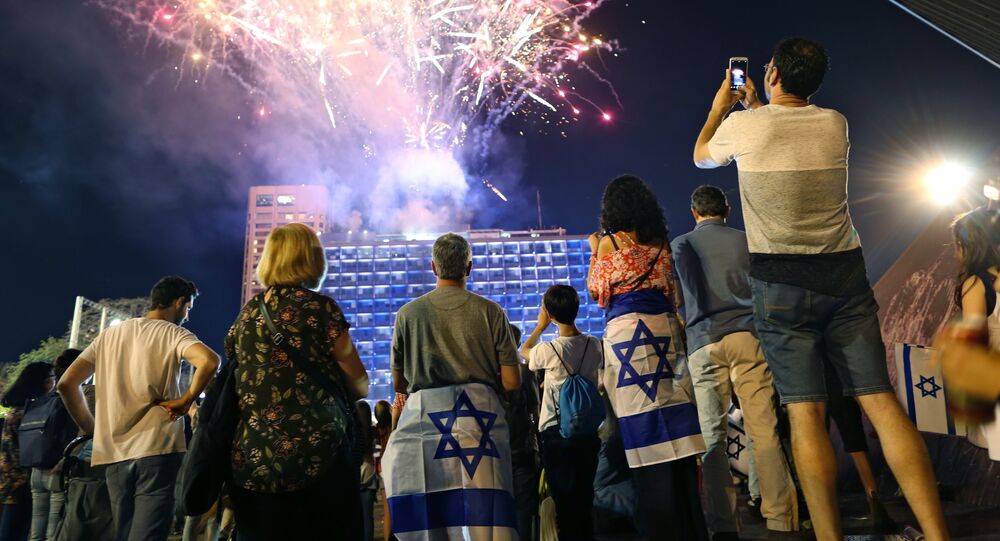 As Israel turns 70, people gather in the streets and beaches to take part in the Independence Day festivities across the country.

The annual torch-lighting ceremony at Mount Herzl in Jerusalem, attended by some 6,500 people, marked the beginning of the two-day-long celebrations on April 18. The solemn event was highlighted by Prime Minister Benjamin Netanyahu’s eloquent speech, as he vowed that no one would “extinguish” the Jewish state’s “light.”

The 12 torches, symbolizing the 12 tribes of Israel in the Bible, were lit by people who are deemed to have made great contributions to Israeli society, with the ceremony accompanied by actors’ performances, singing and dancing and offering an all-encompassing throwback to Jewish history.

In just a few moments, the Israeli flag 🇮🇱 will be raised and celebrations will erupt across the land.

Social media users shared pictures and videos from the festivities, including powerful firework shows in Tel Aviv and Jerusalem…

…and Israeli “protectors from the sky”:

Buildings across the country were lit up in the Israeli flag’s colors:

…as well as psalms to the tune of Israel’s national anthem “Hatikvah”:

Right now: Thousands of Israelis sing Psalm 126—“When the Lord brought back the captives to Zion, we were like dreamers”—to the tune of Israel’s national anthem, Hatikvah, outside Jerusalem’s Old City walls. 🇮🇱 #Israel70 pic.twitter.com/XXzO1GyhgZ

Cheerful Israelis will celebrate Independence Day and enjoy parties until sundown on Thursday:

Some have even prepared special Independence-Day-Cupcakes:

About 300 drones lit up Jerusalem’s night sky over Mount Herzi on Wednesday:

A spectacular show of 300 drones in the Jerusalem sky, Intel Israel. https://t.co/NN0MbTWJSr

The State of Israel was created in 1948 – a milestone for the Jewish people, who just three years prior were suffering as a result Nazi Germany’s atrocities during World War II. Israel’s creation was completely rejected by its Arab neighbors, which attacked the newly founded state on the next day. Every year since then Israel mourns its soldiers, fallen during the war between the Jewish State and a military coalition of Arab countries, with a solemn remembrance ceremony before a transition to nationwide celebrations.