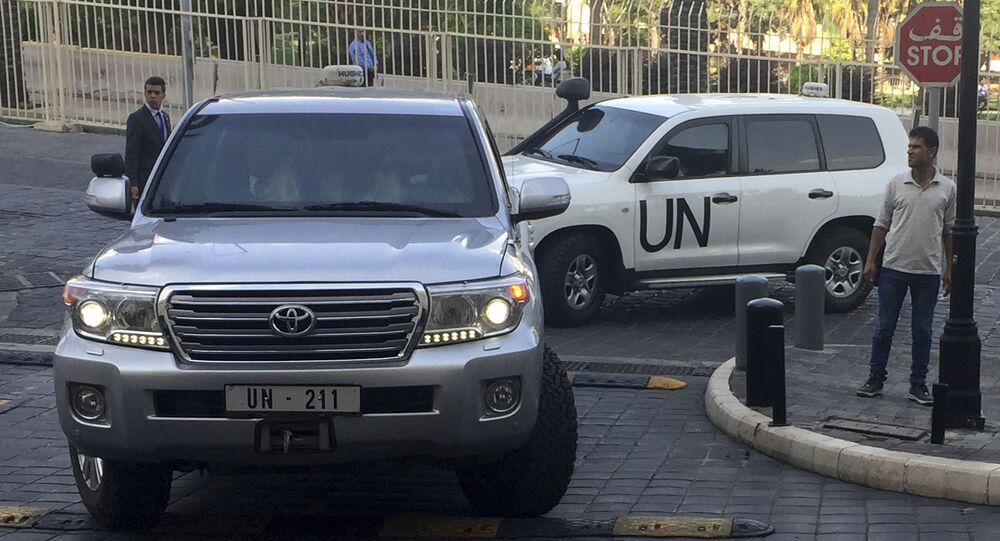 OPCW Director-General Ahmet Uzumcu has told a meeting at the OPCW headquarters in The Hague that the UN security team was forced to retreat, delaying the arrival of chemical weapons inspectors due to visit the site.

The UN team had reportedly arrived in the town to see if it was safe enough to start investigating an alleged chemical attack by the Syrian government. When they were shot at, they decided to withdraw from the city, according to Uzumcu.

Earlier, Syrian Ambassador to the United Nations Bashar Ja'afari stated the UN security team had traveled to the Syrian town of Douma on April 17 ahead of a planned visit by the international chemical weapons experts on April 18 to look into the suspected chemical weapons attack.

"Today the UN security team entered Douma… in order to assess the security situation on the ground and if this United Nations security team decided that the situation is sound in Douma then the fact-finding mission will begin its work in Douma tomorrow. The Syrian government did all that it can do to facilitate the work of this mission" Ja'afari told the UN Security Council.

An additional UN security team will be sent to assess the safety condition in the Syrian town of Duma before deploying the Organization for the Prohibition of Chemical Weapons (OPCW) team, UN Secretary-General spokesperson Stephane Dujarric said in a press briefing.

"An additional advance security assessment visit [is] now required to enable the fact-finding mission to do its work," Dujarric told reporters.

US Defense Secretary Mattis says the Syrian government is responsible for the delay in the OPCW team reaching the suspected chemical attack site.

© REUTERS / Jonathan Ernst
Macron Needs Trump's Support for Pursuing Active Middle East Policy - Analysts
On April 14, the US, France, and the UK launched a massive strike on Syria, firing over 100 missiles, 71 of which were intercepted by Syrian air defense systems. The attack was carried out as "retaliation" for the alleged use of chemical weapons in Douma, Eastern Ghouta, and preceded an international investigation into the case.

The situation in Syria significantly escalated amid reports about the April 7 alleged chemical attack in the city of Douma, after which the EU and the US rushed to blame the forces of Syrian President Bashar al-Assad, with Damascus refuting the allegations.