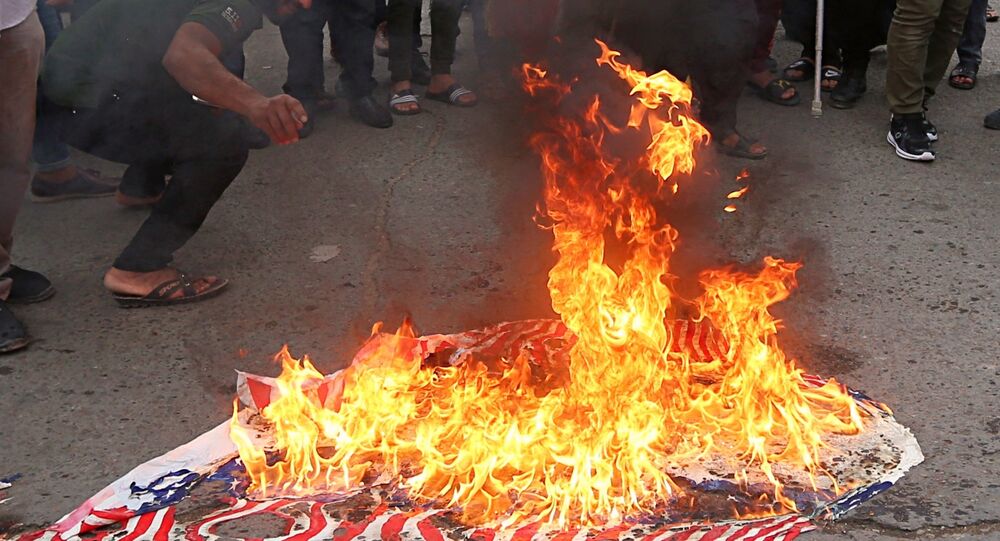 Iraqis took to the streets in the country’s capital of Baghdad and several other major cities on Sunday to protest against US-led airstrikes on Syria.

Footage from the demonstration on Tahrir Square shows crowds raising Iraqi and Syrian flags in solidarity with the Syrian people while burning US flags, stomping on them and condemning military action taken by the US, France and the UK.

Demonstrators reportedly called on the US to "stop destroying Syria as it destroyed Iraq," referring to the 2003 US operation in the country to overthrow Saddam Hussein's regime that led to over a million Iraqi deaths in a decade-long insurgency against American and British forces.

© AP Photo / Hadi Mizban
Protesters burn representations of US flags as they wave Iraqi and Syrian flags during a protest against the US-led missile attack on Syria, in Tahrir Square, Baghdad, Iraq, Sunday, April 15, 2018.

Iraq's foreign ministry warned that the strikes against Syria marked a "very dangerous development… threatening the security and stability of the region and giving terrorism another opportunity to expand."

READ MORE: US Reporter in Douma: Nobody Heard or Saw Anything Like a ‘Chemical Attack'

On Saturday, the US, France and the UK launched a missile attack on Syrian government facilities in response to the alleged chemical attack in the town of Douma that reportedly took place on April 7. The alleged incident was blamed on Syrian President Bashar al-Assad, but the leader denied any involvement. The US-led coalition fired 103 missiles at targets in the vicinity of Damascus and Homs, 71 of which were intercepted by Syrian air defenses.