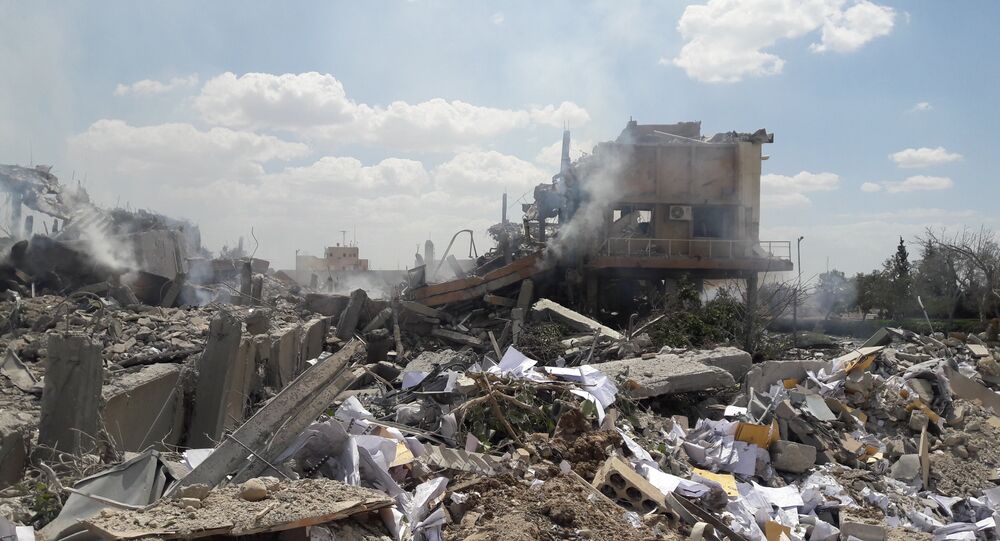 The US-led missile strike against Syria, allegedly aimed at suspected chemical weapon sites, has reportedly resulted in the destruction of a pharmaceutical facility used to produce cancer drugs.

The Institution for the Development of Pharmaceutical and Chemical Industries in Barzeh, which was one of the targets of the recent US-led attack against Syria, was used to produce medical drugs which are currently in short supply in the country due to sanctions imposed by the West, Press TV reports.

"Since the Syria crisis broke out, the country has been short of all kinds of medicines due to the sanctions from Western countries. Foreign companies stopped exporting high-quality medicines to Syria, especially anti-cancer medicines. So we have been conducting researches  on anti-cancer medicines here, and three cancer drugs have been developed," the facility head said.

© Sputnik / Yazan Kalash
Aftermath of attack on the Barzah scientific research center near Damascus, April 14, 2018
© AP Photo / Mary Altaffer
UN Chief Warns of ‘Full-Blown Military Escalation' Over Syria Attacks
He also remarked that neither he nor his colleagues would’ve been able to remain at the facility like they do now if it contained any chemical weapons like the US authorities claimed.

© Sputnik /
Aftermath of attack on the Barzah scientific research center near Damascus, April 14, 2018

The research center is located in the Barzeh neighborhood near Damascus and is comprised of scientific labs and an educational center, according to the Syrian Arab News Agency.

Most of the missiles, however, were reportedly intercepted by Syrian air defense forces.