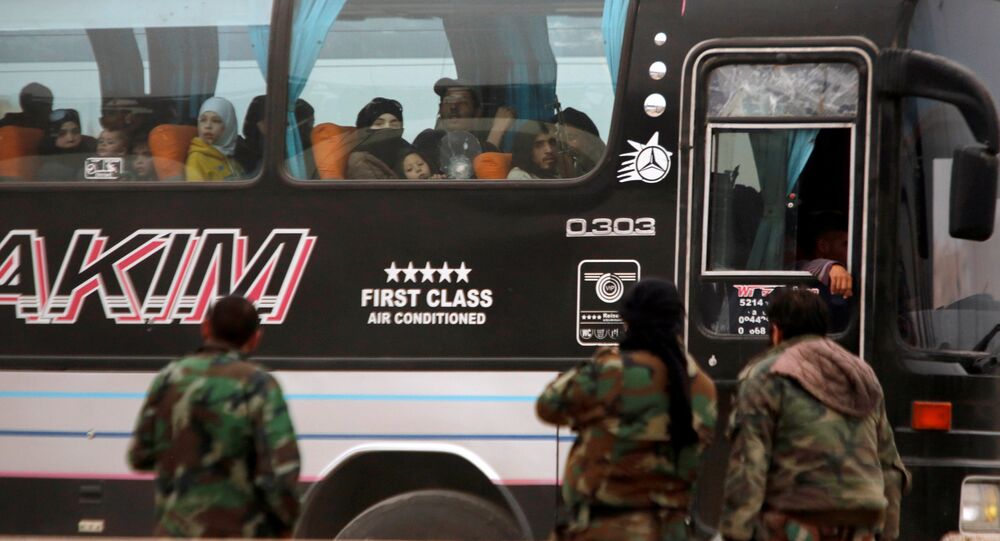 1,200+ Militants Taken With Relatives From E Ghouta to Aleppo Prov. in 24 Hours

Earlier, Russian reconciliation center for Syria said that a total of 153,140 people have been evacuated from the area of Eastern Ghouta since the introduction of humanitarian pauses on February 28.

Over the course of the past 24 hours, more than 1,200 militants were transported through Syria from the suburban Damascus region of Eastern Ghouta to the north of the province of Aleppo along with members of their families through a humanitarian corridor, the Russian Defense Ministry reported.

"Since the beginning of the temporary humanitarian armistice, 3,480 militants and members of their families have been transported from the city of Douma," the Russian Defense Ministry said.

It's notable that along the route, their security was provided by Syrian police under the supervision of officers from the Russian Center for the Reconciliation of Warring Parties and representatives of the Syrian Arab Red Crescent.

The United Nations does not have any reports on any recent fighting or air raids in Syria's Eastern Ghouta following years of "besiegement and suffering," Jan Egeland, the adviser on humanitarian issues to the UN Special Envoy for Syria, said Wednesday.

The situation in Eastern Ghouta has been tense over the past months, resulting in constant shelling by militants of Damascus and fire from the Syrian pro-government forces.