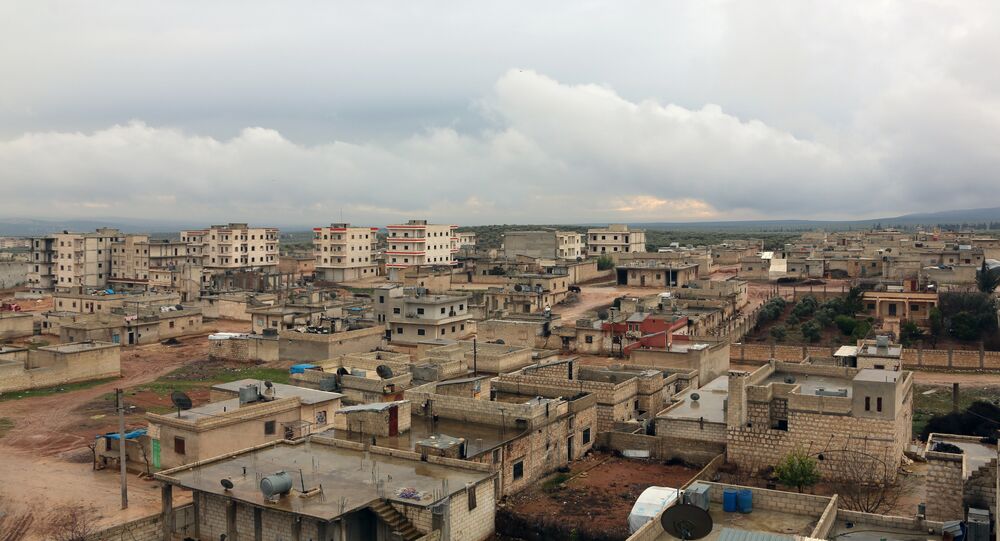 Turkish President Recep Tayyip Erdogan stated that a convoy of pro-Syrian government forces, which tried to enter the besieged Syrian city of Afrin, retreated under the Turkish warning fire in the area. The Syrian armed forces have confirmed neither entering Afrin, not the retreat.

The Turkish president called Syria's forces' decision to enter Afrin unacceptable, warning that it would meet a proper response from the Turkish side.

"Tonight about a dozen pickups were seen moving towards Afrin. But then there was shelling [from the side of the Turkish Armed Forces], and they had to return. So far, this is all over. Yesterday we spoke with respected [Russian President Vladimir] Putin and respected [Iranian President Hassan] Rouhani; we have agreements on this topic. Unfortunately, some terrorist groups sometimes make erroneous decisions themselves, this is unacceptable, and they will be held accountable for it," Erdogan told journalists in Ankara.

According to the previous reports of the Turkish news agency Anadolu, the Syrian military retreated some 10km (6.2 miles) away from Afrin.

YPG representative in Afrin Brusk Haseke told Sputnik earlier in the day that the Syrian government forces have entered Afrin besieged by the Turkish military. The Syrian armed forces, however, yet to confirm this information.

"Yes, this is true. Today the Syrian government army entered Afrin in order to defend the city from the Turkish Armed Forces and the Free Syrian Army jointly with the Kurdish forces of the YPG. The government forces have come to help the people of Afrin. We cannot report on the number of soldiers that entered Afrin. This is military information."

At the same time, the Syrian state TV has shown a convoy, what it says are pro-government forces, entering Afrin.

The troops, wearing camouflage fatigues and waving weapons and Syrian flags from their vehicles are seen on the screen, Reuters said.

Meanwhile, the Syrian TV reports of the shelling of the Syrian government forces, which had entered Afrin by the Turkish military.

However, no official confirmation to this has followed from both — the Syrian and the Turkish sides.

Turkish President Recep Tayyip Erdogan said earlier in the day that Turkish army would encircle Afrin to speed up its operation, adding that possible deployment of Syrian government forces into the city had been "halted through our communications."

© Sputnik / HİKMET DURGUN
SDF Claims Syrian Kurds Attacked Military Camp on Turkish Territory
The day before, a senior Kurdish official said that Syrian Kurdish forces and the country's government had agreed on the deployment of Syrian army troops along border positions in the Afrin region to curb the Turkish campaign.

However, this information has been refuted by Brusk Haseke, who had called them false and fake news in his interview to Sputnik, saying that the Syrian government forces would not enter Afrin.

Commenting on reports, Turkish Deputy Prime Minister Bekir Bozdag said that if Syrian armed forces entered Afrin to support Kurdish militants, this would lead to a catastrophe, giving a green light to split the country.

Reacting to the recent developments in Syria, French Foreign Minister Jean-Yves Le Drian warned that "worse was ahead of us" if nothing is done in the war-torn country.

"We're heading toward a humanitarian cataclysm" in Syria if nothing is done, Le Drian told French lawmakers.

As the minister stated, he would travel to Russia and Iran in the next few days to discuss the war raging in Syria.

"On request of the president of the republic I will go to Moscow and Tehran soon to discuss the situation with all players," he said speaking to the French parliament.

A diplomatic source in Moscow told Sputnik that the visit could take place next week.

"Maybe he will visit Russia next week," the source said.