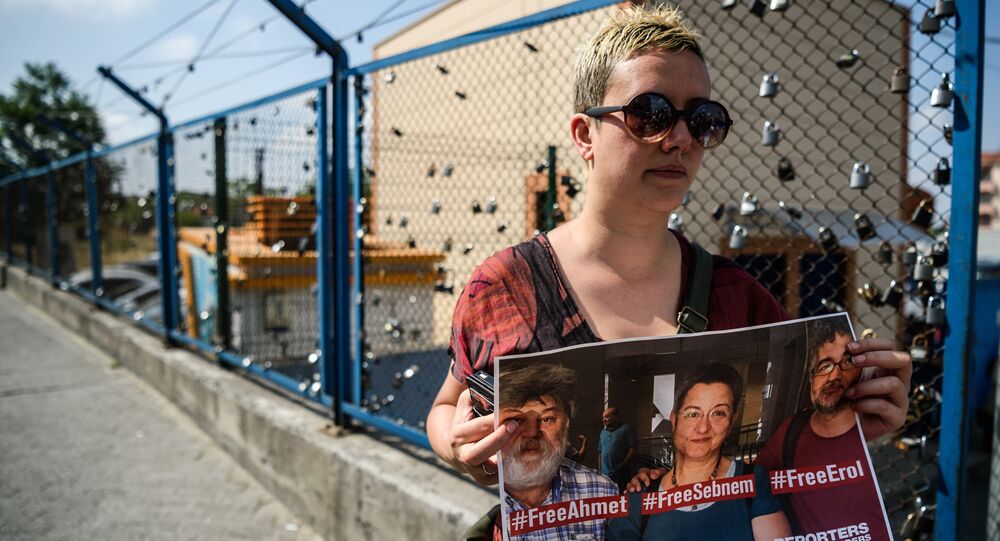 GENEVA (Sputnik) - OSCE Representative on Freedom of the Media Harlem Desir and United Nations Special Rapporteur on the right to freedom of opinion and expression David Kaye strongly condemned on Friday a Turkish court ruling to imprison journalists for life, urging Ankara to reverse the decision and release the journalists.

“We call on Turkey to reverse today’s decision and release the journalists. Imprisonment for journalism not only silences the journalists, but it also deprives Turkish citizens of their right to access pluralistic views on issues that can directly affect their lives,” Desir and Kaye said in a joint statement.

Kaye said that the journalists had been deprived of a fair trial without “substantial proof of their involvement in the coup attempt” and characterized the court ruling as an assault on “the remnants of freedom of expression and media freedom in Turkey.”

In turn, Desir noted that the decision also raised fundamental questions about the ability of the judiciary to uphold the constitutionally protected right to freedom of expression, pointing to January’s ruling of the Turkish Constitutional Court.

Ruben Diaz
Turkish Police Detain Ex-Chief of Erdogan's Security Over Links to FETO
Earlier on in the day, a court in Turkey ruled to sentence journalists Ahmet Altan, Mehmet Altan and Nazli Ilicak to life prison terms over their involvement in the 2016 coup attempt. According to local media, the journalists have been charged with membership in the movement of Islamic preacher Fethullah Gulen, referred to by Ankara as the Fethullahist Terrorist Organization (FETO), and an attempt to disrupt the constitutional order.

In January, Turkey's Constitutional Court ruled that the detention of Mehmet Altan and Sahin Alpay, yet another journalist, was disproportionate and infringing upon their rights to liberty, freedom of expression, and freedom of the media.

A failed military coup attempt took place in Turkey in July 2016. The Turkish authorities accused Gulen of masterminding the thwarted coup and later detained thousands of military personnel, activists, officials, journalists, legal and educational workers over suspected links to the movement of the preacher.

Erdogan Hopes India to Drive FETO-Linked Organizations Out of Country