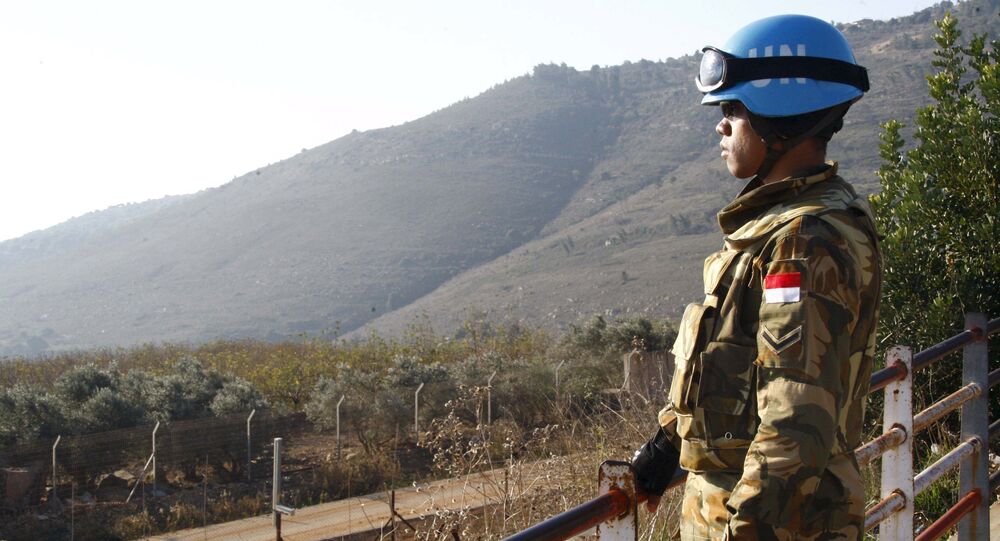 Lebanon and Israel have been involved in disputes over the Jewish state's plan to build a wall along Lebanon's southern border, as well as over the eastern Mediterranean gas field.

Lebanese President Michel Aoun stated that communications are ongoing in order to "prevent Israeli greed on land and sea" amid disputes concerning the border wall and oil deposits.

"Communications are ongoing through the United Nations and friendly states to handle this issue… hoping that Israel does not escalate," Aoun was quoted as saying by his office.

He emphasized that Lebanon "will confront any attack" on its territory or waters.

Over past several weeks, new disputes over the Jewish state's plan to build a wall along Lebanon's southern border, as well as over the eastern Mediterranean gas field have further deteriorated the relations between the Middle Eastern states.

Most recently, Lebanese authorities have lashed out at "Israeli threats" to build a wall on the border, a plan they have described as a "direct threat to stability."

Earlier this week, senior Lebanese officials and Israeli army officers held a meeting under the supervision of the UN peacekeepers (UNIFIL) at the Lebanese border town of Naqoura to discuss the quarrelsome forced entry-resistant construction built by Israeli along Lebanon's southern border. Lebanon insists on shut-down the construction on their territory.

© CC0
Israeli Minister Says Gas Field Put Out to Tender by Lebanon Belongs to Israel
Israel wants to construct 13 fortified installations on contradictory territories that belong to Lebanon. However, the wall is located on the Israeli side of the UN-designated Blue Line, which defined Israel's withdrawal from southern Lebanon in 2000.

Over the past decade, the Lebanese Armed Forces, Hezbollah, as well as the IDF have violated the blue line multiple times. Under the UN Security Council Resolution 425 adopted on March 19, 1978, Israel should avoid any military action against Lebanese territorial integrity and withdraw forthwith its forces from all Lebanese territory.

In addition to this, Israeli Defense Minister Avigdor Lieberman claimed earlier that the eastern Mediterranean gas field that has been put up for tender by Lebanon, and is expected to be developed by an international consortium of energy companies, belongs to the Jewish state, a statement dismissed by Lebanese authorities.

In their turn, Lebanese Prime Minister Saad al-Hariri noted that these comments were one of several “threatening messages” from Israel in recent days, while Foreign Minister Gebran Bassil stated that he already brought this matter to the attention of the UN.

Hezbollah Shiite movement, which has been considered an enemy by Israel, voiced readiness to "decisively confront any assault on our [Lebanese] oil and gas rights.

In December, the Lebanese government approved provisions for the right to explore two energy blocks, namely Block 4 and Block 9, in Lebanon to the consortium of Russia's Novatek natural gas producer with France’s Total and Italy’s Eni.

Lebanon launched its first oil and gas production licensing auction in January 2017, opening five of ten of its Mediterranean blocks up for international bids.

© AFP 2021 / AHIKAM SERI
Israeli Defense Chief's Claim on Offshore Gas Field Threaten Lebanon - President
Lebanon, together with Israel, Cyprus and Egypt, sits on the Levant Basin in the eastern Mediterranean, where new gas fields have been revealed in 2009. Two Lebanese offshore blocks now lie within a triangle of maritime territory claimed by Israel.

In 2006 Israeli armed forces invaded Lebanon in retaliation for a cross-border raid by Hezbollah which resulted in several Israeli soldiers being killed and two being abducted. The ensuing conflict lasted 34 days and ended with a UN-brokered ceasefire, only after claiming the lives of about 1,200 Lebanese and some 160 Israelis.