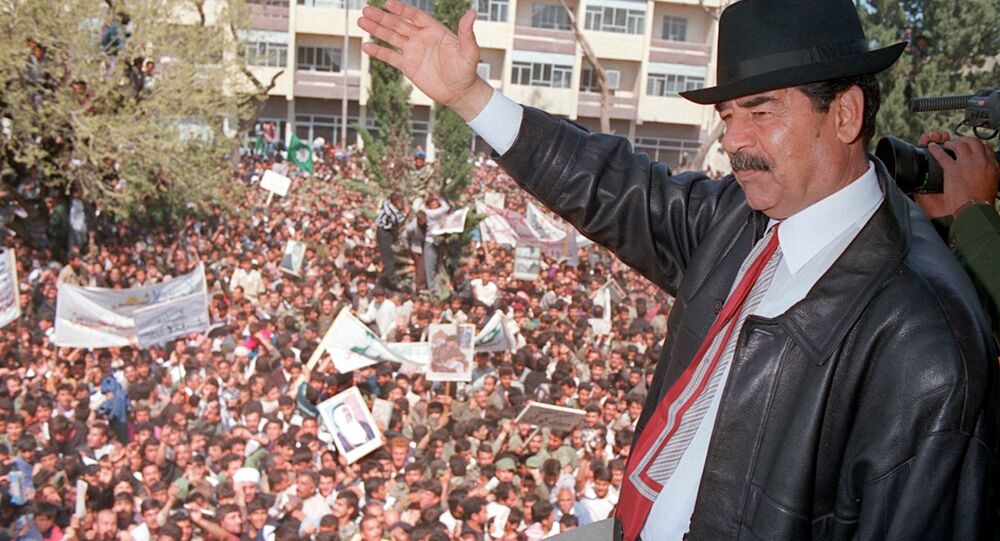 You might be surprised to learn that you can buy an English translation of what is believed to be a romance novel written by former Iraqi President Saddam Hussein on Amazon for $13.95. The book is even eligible for Amazon Prime on orders greater than $25.

The 160-page book is an allegorical love story that describes the relationship between an Iraqi king and a villager named Zabiba, who frequently visits the king's palace at night to discuss religion, love, nationalism and the will of the people. The book is set near Hussein's hometown of Tikrit, Iraq, but its action takes place thousands of years in the past.

Zabiba is married to a cruel husband, who presumably represents the US. The villager's husband forces himself on Zabiba against her will, a likely reference to the US invasion of Iraq during the first Gulf War. Three guesses as to who the kind Iraqi king might be a stand-in for.

"It rapidly becomes apparent that the Zabiba-King relationship functions as a torturously extended metaphor for the relationship between the People and the Ruler," Daniel Kalder wrote for the The Guardian in 2011.

The book was published anonymously, raising questions as to whether Hussein actually wrote it himself. However, the fact that there was no public criticism of the book in Iraq, coupled with its political themes, has led many analysts to conclude that only Hussein himself could have penned it.

CIA officials, however, who carefully read through the book, believe that it was most likely written by ghostwriters under Hussein's supervision.

Robert Lawrence, an American businessman, reportedly published the English version of the book for curiosity's sake.

"Some critics have suggested that ‘Zabiba and the King' was ghostwritten. I doubt that: it is so poorly structured and dull that it has the whiff of dictatorial authenticity," Kalder wrote.

The book is unmemorable, according to Kalder, albeit for one scene in which a character describes a sex act between a herdsman and a bear in what could be a symbolic representation of Iraq and the Soviet Union, one of Iraq's primary benefactors for decades during the Cold War.

The book, which has a three-star rating on Amazon, only has a few customer reviews.

According to one Amazon user, "If you're going to buy this book, buy it as an historical curiosity, not for literary entertainment. It is a complete trainwreck of a book. The book, overall, is a painful mess to slog through."

However, another Amazon reviewer had a different impression.

"Saddam Hussein's romantic fable 'Zabiba and the King' is a fascinating and moving work which provides a unique insight into the psyche of the former Iraqi dictator," the reviewer wrote.

"'Zabiba and the King' appears to be a genuine attempt by Saddam Hussein to resolve some of the contradictions in his own nature and his political philosophy. While CIA analysts focused on the allegorical dimension of the novel, it is open to multiple interpretations like all genuine works of literature," the user added.

On December 13, 2003, Hussein was captured by US forces in ad-Dawr, a town near Tikrit. Three years later, he was executed by an Iraqi Special Tribunal for crimes against humanity, including the murder of 148 Iraqi Shi'ites in the town of Dujail. Before his death, Hussein wrote poetry, including "Unbind It," considered to be his last written work.