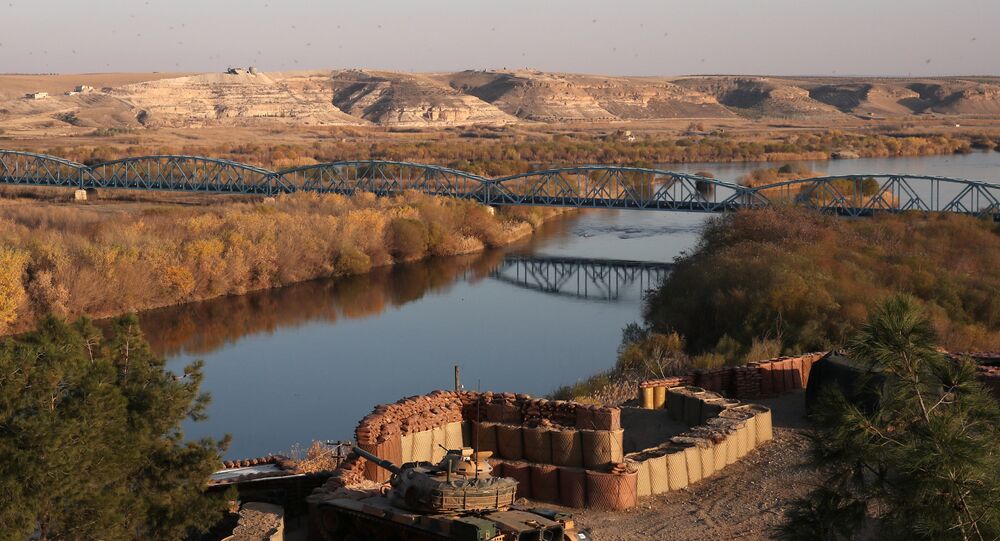 Russian and US forces have been communicating across the "deconfliction line" in Syria despite glitches, US Defense Secretary Jim Mattis told reporters on Friday.

WASHINGTON (Sputnik) — The deconfliction line runs down the Euphrates River. US-led coalition forces and their Syrian militant allies are positioned on its eastern bank, while Russia-backed government troops control the western bank.

© AP Photo
Pentagon Denies Claims of Training Daesh in Syria
He added there had been problems on the demarcation line, but they were resolved. He added there was "no need" for the coalition to go after Islamic State (Daesh) fighters into the government-controlled territories.

Mattis said the Daesh caliphate was "on the run" and its fighters were fleeing west. He confirmed a statement by British General Felix Gedney who said Daesh forces heading west could mount counterattacks on the coalition, saying they attacked every day.

"Some people escaped. That's what happens in war. They moved, clearly, into the Middle Euphrates River Valley. We are in the process of crushing the life out of the caliphate there," Mattis said.

The situation with the demarcation essentially means that President Bashar Assad's army will have to deal with Daesh fighters who flee west across the river.

"This is the normal thing that happens. I mean, it's not a big issue. They'll have to be hunted down. But I seriously doubt that Assad sees this as a positive on his side, either," Mattis said.

Earlier, the US Defense Department head wrote in an article that Pentagon will work together with Russia to promote mutual interests in Syria, saying that Washington is confident that the UN-led process in Geneva "will produce a Syria that is free of Bashar al-Assad and his family."

© CC BY 2.0 / The U.S. Army / Jalalabad Airfield
US Reportedly Evacuates Daesh Leaders From Syria's Deir ez-Zor Again
Asked at a press gaggle in Washington whether the US plan for Syria was to dismantle it into several different countries, Mattis replied, "No."

Syria has been divided into areas controlled by government troops and those held by militant forces backed by the US-led international coalition, with Kurds commanding vast northern territories.

Mattis also told reporters at the Pentagon when asked whether Syrian government forces could disrupt US plans in Syria that "that would probably be a mistake".

When pressed to elaborate on the remark, Mattis said his comments did not constitute a warning. Rather, he said, the remark reflected the reality on the ground in Syria, where a demarcation line separates the US-led coalition from Russian-backed Syrian government troops.

"No, I don't see an evolving US military role in Ukraine," Mattis said. "Right now, as you know, we have some trainers there helping to train their army to NATO standards… and that has a lot to do with making certain it serves the needs of the Ukrainian people, the way democracies’ armies do. And so, no, the US military role remains the same."

© AFP 2021 / DOD
Analyst: US Anti-Tank Missiles, Rifles in Ukraine Could Cause ‘Serious Escalation’
On Saturday, US State Department spokeswoman Heather Nauert said the United States planned to provide Ukraine with military assistance to help protect its territorial integrity, in a way that is purely defensive and will not violate the Minsk peace accords.

US media cited officials that the United States planned to sell lethal arms to Ukraine, including anti-tank Javelin missiles.

Russia has repeatedly warned against supplies of lethal arms to Ukraine, saying that such actions would result in escalating the conflict in the country's eastern Donbas region. Russia’s stance has also been supported by a number of European officials.