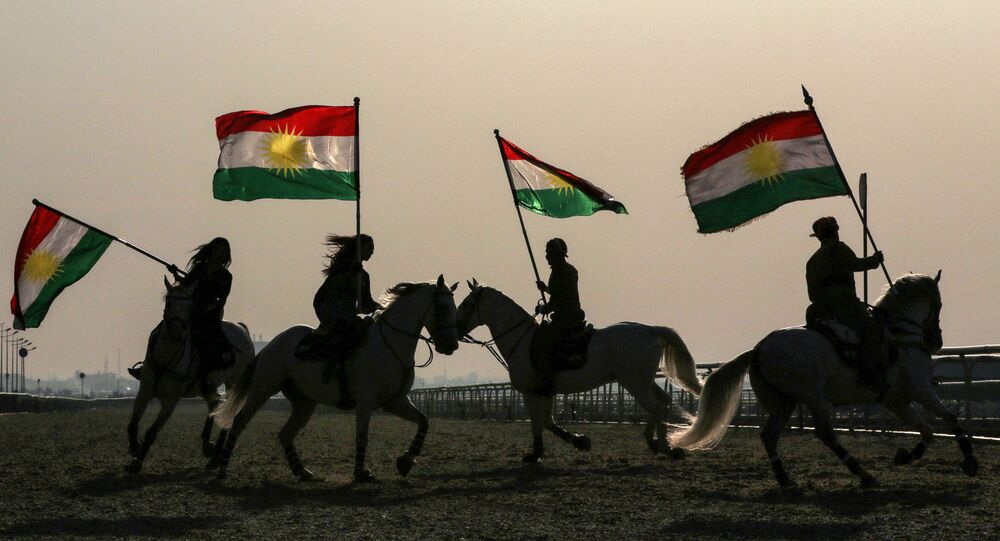 MOSCOW (Sputnik) - The ongoing protests in Iraqi Kurdistan have been caused by an economic crisis and lack of funds at the disposal of the regional government, Hoshawi Babakr, the Kurdistan Democratic Party's (KDP) representative in Russia, told Sputnik on Tuesday.

"Not only the offices of the KDP, but also the offices of other parties have suffered… The economic situation is complicated enough. The oil exports from Kurdistan have decreased manifold and Baghdad is not transferring any money to the autonomous region," Babakr said, adding that a lot of people were engaged in the unrest.

The official added that protests caused by delays in the payment of wages had already taken place in Kurdistan before, while the ongoing unrest was caused by a deterioration in the economic situation in the region after the September independence referendum.

© AFP 2021 / DELIL SOULEIMAN
Academic Explains How Syrian Kurds May Benefit From Fixing Ties With Damascus
Since Monday, protests have been ongoing in the large cities of Iraqi Kurdistan, such as Erbil and Sulaymaniyah, as well as in other parts of the autonomous region. The protesters burned the office of the KDP near Erbil, opposing delays in the payment of wages and the worsening of living conditions.

The reasons behind the austerity in the region, which triggered the escalation of tensions in the region, are connected with the seizure of the oil-rich territories of Kirkuk, which led to the loss of about a half of the revenues in the area, and the cut of the financial support from the Iraqi side in early 2014, after Iraqi Kurdistan had built independent oil pipeline to Turkey.

The situation in the region has further escalated since Iraqi authorities had launched a military operation, provoked by the independence referendum, held earlier in September. The loss of oil-rich territories hit a hard blow to the local authorities, with Kurdish leader Massud Barzani's announcement of his resignation in late October.