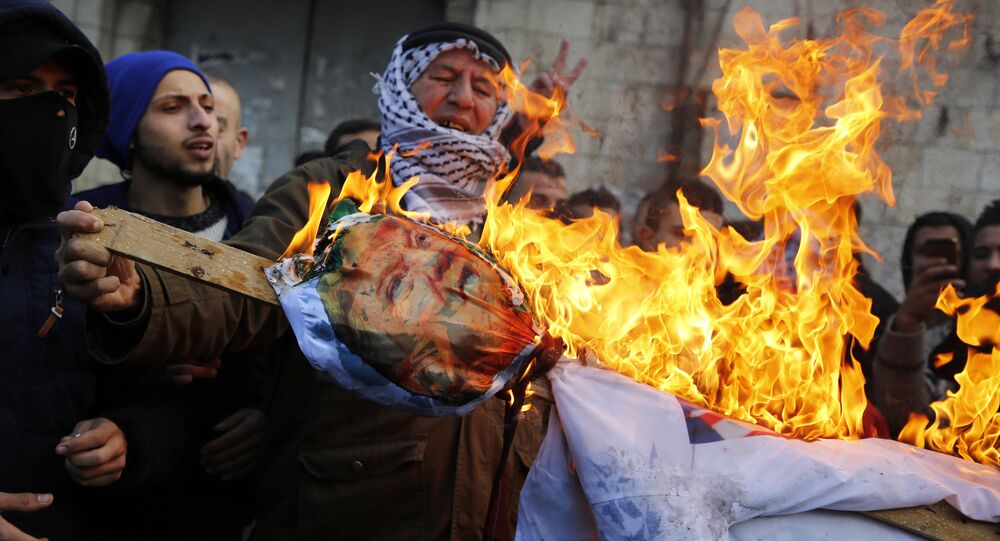 While US President Donald Trump’s recent statement recognizing Jerusalem as the capital of Israel has sent shockwaves throughout the world, questions remain about what exactly the implications of this statement are.

In response to Trump’s  recognition of Jerusalem as the capital of Israel on December 6, Hamas called for a “third intifada.” Riots were also triggered among Arab residents in Israel, as well as a series of clashes between Palestinians and Israeli security forces. However, some doubt whether there will actually be any significant changes as a result of Trump’s statement.

Radio Sputnik spoke with Dr. Kobi Michael, senior research fellow at the Institute for National Security Studies at Tel Aviv University and former deputy director general and head of the Palestinian desk at the Ministry for Strategic Affairs.

“The statement of recognition that was made by President Trump doesn’t change anything significantly,” Dr. Michael told Radio Sputnik.

© REUTERS / Ammar Awad
LISTEN: Jordanian 787 Pilot Calls Jerusalem Capital of Palestine
Commenting on the threat of a third intifada as a consequence of Trump’s statement, Dr. Michael remained unconvinced that the Palestinians have the will for such an uprising.

“There is not any energy in the Palestinians for another intifada. There is no legitimate or trusted leadership in the eyes of the Palestinians, mainly in the West Bank, but also in the Gaza Strip,” Dr. Michael said, adding “They remember what happened twelve years ago in the second intifada and the high price that Palestinian society paid in the second intifada, and are not willing to do that a third time, at least for the time being.”

READ MORE: Erdogan Will Reportedly Turn to UN to Counter US Move on Jerusalem

Another important factor that reduces the willingness of Palestinians to launch a new intifada, according to Dr. Michael, is that Arab leaders have shown themselves relatively uninterested in the Palestinian issue. He also points out that while we hear a lot of angry rhetoric on social media and political statements:

“We need to differentiate between anger and rage that is expressed in polls and on social media, and so on, and the real willingness to go outside to the streets to clash with the Israeli security forces. There is a difference between these two, and I think that we don’t have to be too impressed by the high volume that we hear in the social media and from the high volume that we hear from the political statements that are made, mainly by Hamas.”

© Sputnik / Andrey Stenin
Daesh Reportedly Threatens US Attacks Over Jerusalem Decision
According to the scholar, the recognition of Jerusalem as the capital of Israel is comparable to recognizing the state of Israel’s existence. It’s almost universally recognized, but that does not mean that everyone agrees on its final borders.

Thus, according to Dr. Michael, even though Trump has made the move to recognize Jerusalem as the capital of Israel, ultimately it is only via negotiations with the Palestinians that a sustainable solution will be reached.

The views and opinions expressed by Dr. Kobi Michael are those of the expert and do not necessarily reflect Sputnik's position.