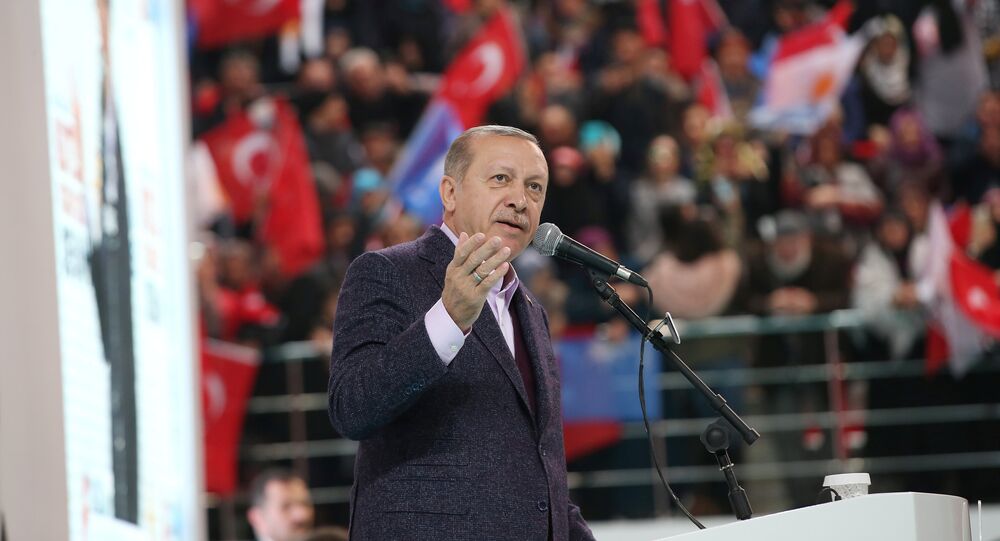 Turkish President Recep Tayyip Erdogan and Israeli Prime Minister Benjamin Netanyahu have traded accusations in the wake of the US decision to recognize Jerusalem as the capital of Israel and to move the country's embassy to the disputed territory from Tel Aviv.

"Palestine is an innocent victim […] As for Israel, it is a terrorist state, yes, terrorist!" Turkish President Recep Tayyip Erdogan stated during his speech in the central city of Sivas on Sunday.

The Turkish president vowed to use all possible means to fight Israel, claiming that "we will not abandon Jerusalem to the mercy of a state that kills children," holding a picture a 14-year-old Palestinian boy from Hebron, as he described, allegedly dragged away by Israeli soldiers.

The statement comes in line with his previous stance, calling US President Donald Trump's announcement, made on December 6, recognizing Jerusalem as the capital of Israel, "null and void."

Israeli Prime Minister Benjamin Netanyahu has reacted the Erdogan's accusations later on Sunday, saying that he would not take any lectures from the Turkish president.

"Mr. Erdogan has attacked Israel. I'm not used to receiving lectures about morality from a leader who bombs Kurdish villages in his native Turkey, who jails journalists, helps Iran go around international sanctions and who helps terrorists, including in Gaza, kill innocent people," Netanyahu told reporters during a news conference with French President Emmanuel Macron.

A few hours after the Trump declaration regarding Jerusalem, Turkish President Recep Tayyip Erdogan as the current chairman of Organization of Islamic Cooperation (OIC), called for an emergency meeting on December 13th to convene in Istanbul.

In his previous statements, Erdogan has vowed to urge the OIC to cut ties with Israel in the event of the corresponding decision on Jerusalem being adopted.

Despite the Turkish leader's statement in April, proclaiming the normalization of diplomatic relations with Israel which had deteriorated in 2010, Erdogan has expressed his support to the Palestinian state, repeatedly criticizing Tel Aviv's policy.

The president has called Jerusalem the "red line for Muslims," explaining that the US decision on the disputed area would be "a heavy blow for all mankind."

According to Erdogan, the decision of the United States, a permanent member of the UN Security Council, to move its embassy to Jerusalem undermines the reputation of the United Nations and violates international law.