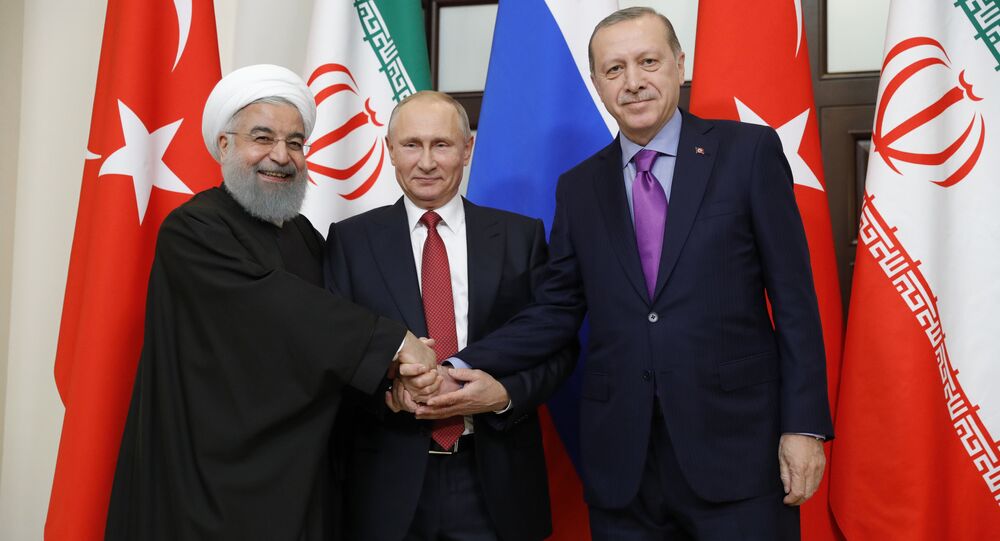 Speaking to the press after his meeting with his Iranian and Turkish counterparts in Sochi on Wednesday, President Putin said the peace talks in Astana and the establishment of de-escalation zones in Syria have made possible a fundamentally "new stage" in the Syrian settlement, and helped secure a "breakthrough" opportunity to crush the terrorists.

In the course of their meeting, presidents Vladimir Putin, Hassan Rouhani and Recep Tayyip Erdogan discussed the progress that has been made in the Syrian settlement process, and the steps necessary to ensure the complete and long-term normalization of the political and security situation in the country.

A joint statement released by the three heads of state after their talks declared that the countries' collaborative efforts in the 11 months since the establishment of the ceasefire regime in late December 2016 have helped to secure a "breakthrough" in "bringing closer the elimination of [Daesh], the Nusra Front and all other terrorist organizations as designated by the United Nations Security Council." The countries vowed to continue their cooperation until the terrorists are completely defeated.

The talks between the leaders of Russia, Iran and Turkey have concluded in #Sochi. Press statements: https://t.co/qdJpdjOiu3

© REUTERS / Yasin Bulbul/Turkish Presidential Palace
Putin: Syria's Disintegration Was Prevented, Civil War Almost Stopped
Furthermore, the leaders promised to continue their coordinated efforts in reaching a political settlement "to ensure that the progress in the reduction of violence is irreversible." This includes political support for reconciliation talks between the government and the opposition, assistance to Syrians in restoring the country's unity, free and fair elections and a work on a constitution that would enjoy the support of the Syrian people. Crucially, the three leaders also reaffirmed their commitment to Syria's sovereignty and territorial integrity.

Speaking to the media after the talks, Putin observed that the "large-scale military operations against terrorist gangs in Syria are coming to an end," adding that the joint efforts by Moscow, Tehran and Ankara have effectively saved Syria from disintegration and its capture by the jihadists, and the humanitarian disaster that would have accompanied that eventuality.

"Indeed, militants in Syria have suffered a decisive blow, and now there is a real chance to end the civil war that has lasted many years," the president added.

Putin emphasized the importance of the Astana peace talks process, pointing out that it made possible, for the first time, to successfully bring the representatives of the Syrian government and the armed opposition to the negotiating table. A "completely new stage" – the chance for a genuine and lasting peaceful political settlement, is now possible for Syria, he added.

The president thanked presidents Rouhani and Erdogan personally for the "special role they played" in this process. "Without the stance you took, the Astana process would not have existed; there would have been no cessation of hostilities, no ceasefire, no de-escalation zones," Putin stressed.

President Rouhani of Iran echoed Putin's optimism, saying that Wednesday's meeting will help contribute to the peace process started in Astana. "Our three states are urging all countries of the world to assist in establishing peace in Syria, in creating conditions for the return of Syrian refugees home, and for ensuring conditions for the Syrian state's economic recovery," he said.

Rouhani added that the groundwork has been laid for a political settlement in the war-torn country, and that he was pleased that the three countries have been able to cooperate so closely on the Syrian peace process. At the same time, the Iranian leader emphasized the point that any foreign military presence in Syria is acceptable only with the consent of the Syrian government, in accordance with international law.

President Erdogan mirrored to his counterparts optimism, saying that critical decisions have been taken in Sochi on Wednesday on the road to resolving the Syrian crisis.

Erdogan noted that the three sides have made important progress, but that the Astana talks don't go far enough, and that "all stakeholders must put effort into a political resolution to the conflict which the Syrian people would accept." He also emphasized that the YPG Kurdish militias (which Ankara classifies as terrorists) must be excluded from the process. "We came to a common conclusion that we need to more actively develop relations in all sectors," he said, rounding out his takeaway from the meeting.

Summery of outcomes from #Sochi press conference between #Putin, #Erdogan and #Rouhani on #Syria: pic.twitter.com/Cw22DQehpE

The Syrian Foreign Ministry said it welcomes the Sochi communique. A Foreign Ministry source speaking to the SANA news agency said that "any political action that respects the sovereignty, independence and territorial integrity of Syria and contributes to sparing the blood of the Syrian people" has Damascus's support. Accordingly, "the Syrian government welcomes the final statement of the trilateral summit held today in Sochi." The source added that it sees Wednesday's meeting as a continuation to Monday's bilateral meeting between President Putin and Syrian President Bashar Assad.