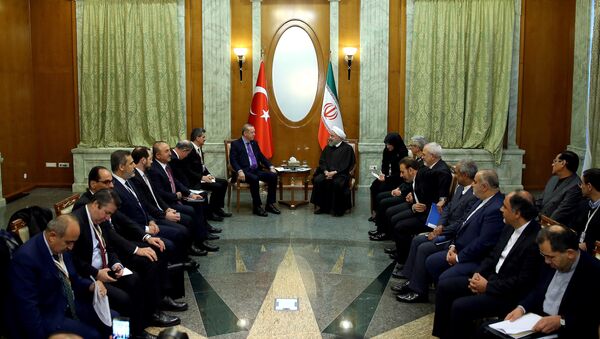 The presidents of Russia, Turkey, and Iran are meeting in the Russian resort city of Sochi to discuss the settlement of the Syrian crisis. They are expected to approve a joint declaration after the meeting.

Speaking at the opening of the meeting, Russian President Vladimir Putin said that the coordinated efforts of Moscow, Ankara, and Tehran have prevented the disintegration of Syria. He noted that the military actions against the terrorists are coming to an end.

"A decisive strike has been carried out against Syrian terrorists, offering a real chance to put an end to the long-lasting civil war," Putin said.

Russian, Iranian, Turkish Presidents Gather in Sochi to Discuss Syria's Future
According to Vladimir Putin, "the Syrian people themselves have to agree on the principles" to

Intra-Syrian dialogue should include all groups of the country's population and this goal is pursued by the future National Dialogue Congress, Russian president added.

The political settlement in Syria must be formalized within the framework of the Geneva process, Russian President Vladimir Putin noted.

"We can confidently say that we have approached a new stage, which opens an opportunity to start the real political settlement process. I believe that our efforts should be focused on ensuring the long-term normalization in Syria. First of all, I am talking about the political settlement process with the finalization of these negotiations within the framework of the Geneva process and the promotion of the country's post-conflict recovery," Putin said.

According to Putin, the process of the Syrian settlement must also include the humanitarian aspect, which involves assistance to the population, demining of the liberated territories and promotion refugees' return, as well as solving economic problems.

"We will exchange our views on how to give a fresh impetus to a political settlement based on the UN Security Council resolution 2254. I would like to remind you that the document envisages the launch of intra-Syrian dialogue including all ethnic, religious and political groups of the population… The Syrian people will determine their future themselves, coordinate principles of the state structure… That is the aim of the National Dialogue Congress that will gather here, in Sochi," Putin said.

Assad Tells Putin at Meeting: Syria Was Saved as a State Thanks to Russia
The conflict in Syria has been accompanied by foreign interference and external support of militants from the very beginning, which delayed settlement of the crisis, Iranian President Hassan Rouhani said Wednesday.

"Interference from abroad in domestic affairs, including deployment of equipment and arms supplies, and comprehensive support of militants, which later formed the backbone of Daesh and Jabhat Fatah al-Sham," Rouhani said at the beginning of trilateral meeting with Russian President Vladimir Putin and Turkish President Recep Tayyip Erdogan in Russia's Black Sea resort of Russia.

He stressed that all of this was a "factor for delaying this crisis."

The Syrian civil war has been raging since 2011, while troops were fighting against numerous opposition factions as well as terrorist groups. Russia, alongside Iran and Turkey, is a guarantor of the ceasefire regime in Syria. The Russian Aerospace Forces supported the Syrian government in their fight against terrorists since 2015 at the request of Syrian President Bashar Assad. Moscow has also been assisting Damascus by providing humanitarian aid. The international community has organized two platforms for discussing the reconciliation between the government and the opposition, in Geneva and Astana. The countries are conducting active negotiations in the Astana format to improve the situation on the ground, and eventually pave the way for a political settlement. During the September round of the Astana talks, Russia, Iran and Turkey, the three states that serve as guarantors of the Syrian ceasefire, agreed on four de-escalation zones in Syria.

The next round of Geneva talks is set to take place on November 28.