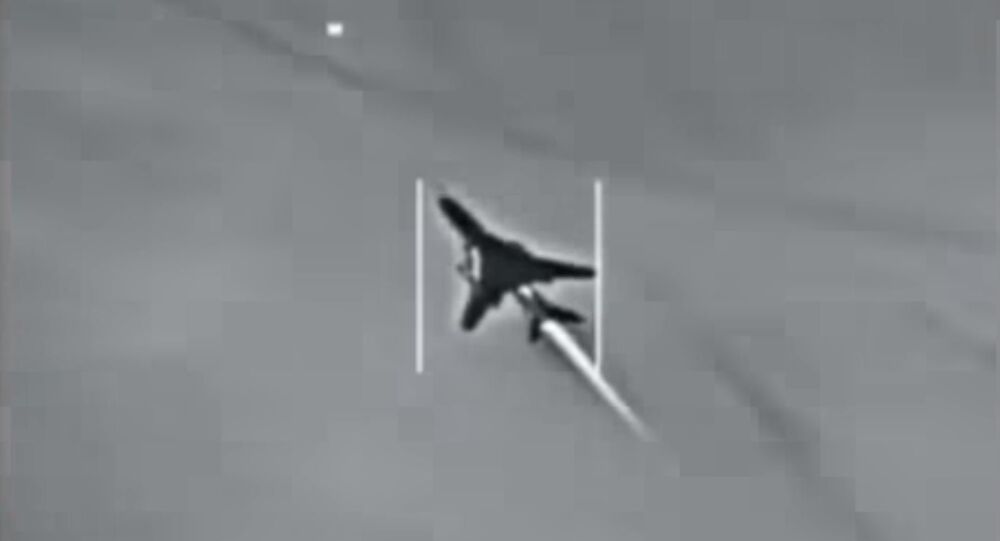 WATCH: Video of US Warplane Shooting Down Syrian Su-22 Revealed

As Popular Mechanics reported June 26, the Super Hornet’s first attempt at downing the aging Syrian ground attack aircraft with an AIM-9X Sidewinder short-range air-to-air missile missed. The Syrian pilot launched flares to divert the infrared-guided missile and it took the bait. The Super Hornet then fired a radar-guided AIM-120 AMRAAM (advanced medium range air-to-air missile) at the Fitter that was more successful, shooting it down, The Aviationist reported Thursday.

​Based on the varied angles shown in the footage, the film appears to have been captured by other Super Hornets flying in the same sortie.

The incident was spurred by the Su-22 allegedly dropping payloads “near [US-backed Syrian Democratic Forces] south of Tabqah,” US Central Command said in a June 18 statement following the incident.

After taking off from the USS George H.W. Bush in the Mediterranean Sea, F/A-18 pilot Lt. Cmdr. Michael Tremel noticed the area of responsibility “was pretty hot in that general vicinity and a lot of guys were dropping bombs,” Sputnik reported September 18.

"We released ordnance and yes it hit a target that was in the air, but it really just came back to defending those guys that were doing the hard job on the ground and taking that ground back from [Daesh]," Tremel said in an earlier interview.