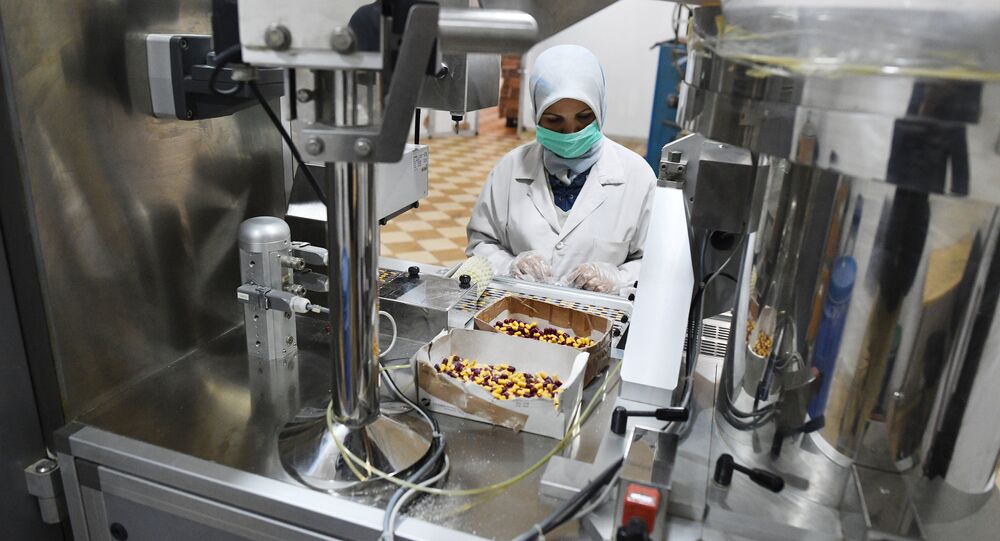 A large pharmaceuticals plant in an industrial suburb of Damascus, Syria has resumed its operations after being severely damaged by militants during the war.

Plant owner Dr. Omar Aiswete told reporters that "after the outbreak of hostilities in Syria and the arrival of militants in this region, our production was stopped; the terrorists destroyed the plant. Much of our machinery was destroyed."

Aiswete added that before the war, "we produced over 40 kinds of medications: pills, ointments, treatments, especially for those suffering from heart troubles, and painkillers."

© Sputnik / Mikhail Alayeddin
Syrian Army Breaks Through Daesh Lines at Southern Entrance to Deir Ez-Zor
Aiswete's plant is located in Adra, an industrial town in the suburbs of the Syrian capital. The doctor explained that the recent creation of de-escalation zones and a ceasefire regime in East Guta, guaranteed by the Russian military police forces, has resulted in many plants in the area restarting their operations. His plant was one of them.

"You can see that other factories and plants are restarting their production. We all want peace, and believe in the future of Syria. Now it's our turn to restore production," Aiswete said.

Plant workers are working double shifts to try and make up for the time that was lost during the war. The plant includes a laboratory which conducts research to create generic versions of Western drugs.

"The plant is new and its staff is young. This is where the future of the Syrian pharmaceutical industry is being created. The future is with us," the plant owner proudly said.

© Sputnik / Michael Alaeddin
Deir ez-Zor: Syrian, Russian Forces Inflict Biggest Defeat on Daesh in 3 Years
Although the plant's production is only starting to gain momentum, its products are already being supplied to about a hundred Syrian pharmacies. In addition, as soon as other countries remove their sanctions against Syria, the country plans to start exporting its production. Aiswete sees Russia as a possible export market.

Before the war, Syria's pharmaceutical industry was one of the most important sectors of the country's economy. In 2010, the country had 72 laboratories and pharmaceutical companies, providing for over 90% of Syria's domestic needs and exporting its products to 52 other countries, including much of the Arab world.

After the beginning of the crisis and foreign-sponsored civil war in 2011, Western sanctions made it difficult for Syrian companies to obtain the necessary raw materials for their production. The industry's problems were compounded as fighting intensified and militants began destroying and looting factories and laboratories.

The loss of these production capabilities and poor sanitary conditions due to the war led to a dramatic rise in infectious diseases. The good news is that Syria's pharmaceuticals production is concentrated in three areas: around Damascus, Aleppo and Homs. In 2015, the Syrian government restored control over the city of Homs. A year later, it liberated eastern Aleppo, thereby dramatically improving the prospects for restoring those provinces' pharmaceuticals production capabilities.