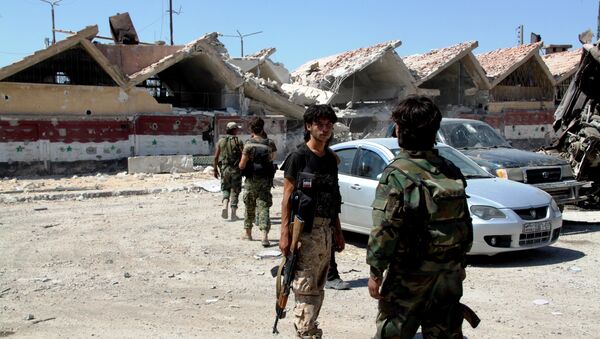 The Syrian armed forces supported by Russian aviation have inflicted an excruciating defeat on Daesh terrorists in Deir ez-Zor area, which may be considered the terrorist group's biggest loss in the past three years, the Russian Defense Ministry said Saturday.

"Syrian government troops, with the support of the Russian Air Force, achieved a major success, inflicting a devastating defeat on Daesh units in the area of the city of Deir ez-Zor, which is bigger in scale than all previous victories over the past three years," the statement read.

The Syrian military started an operation to unblock the airbase on Friday, days after breaking the siege of Deir ez-Zor. A Sputnik correspondent reported earlier in the day that fierce fighting was ongoing near the base between Syrian troops and terrorists.

Alleged US Evacuation of Daesh Field Commanders: 'We Are Rescuing Our Allies'
"Currently, the government troops under the command of Gen. Suheil Hassan together with the units, which had been under the siege at the Syrian military airbase, are widening the corridor between the airfield and Deir ez-Zor, carrying out successful military actions on the flanks," the statement added.

The airbase is located two kilometers east of Deir ez-Zor. It has been blocked by the terrorists for more than three years. By the end of January, Daesh militants managed to cut off the communication routes between the city and the airbase. However, the Deir ez-Zor garrison held the defense despite regular Daesh attacks.