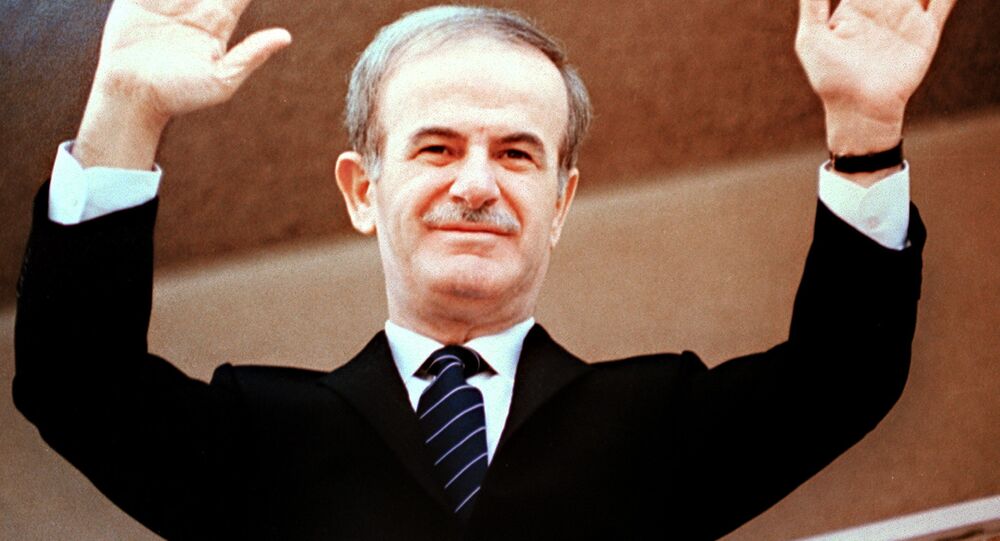 Sifting through the CIA's database of 11 million+ declassified documents, WikiLeaks has uncovered a report from 1986 on "possible scenarios that could lead to the ouster of President Assad." Pointing to the potential for exploiting sectarian tensions, the report nonetheless ironically explains why the US's current regime change strategy is wrong.

In January, the US Central Intelligence Agency put over 11 million of its declassified files online. On Monday, WikiLeaks discovered that one of these documents includes a secret report involving scenarios for ousting Hafez Assad (Bashar Assad's father) going back all the way to the Reagan administration.

The document, created under the supervision of the Director of Global Issues by the appropriately named Foreign Subversion and Instability Center, and distributed to senior intelligence officials, as well as officials in the State Department, the Pentagon, Reagan Middle East policy advisor Dennis Ross, and William Eagleton, then-US ambassador in Syria.

The memorandum casually lays out what the CIA envisions to be the "scenarios that could lead to the ouster of President Hafez al-Assad in Syria." The report makes no bones about its "purposely provocative" nature and tone.

© AP Photo
Why Assad Must Stay: 'A War Involving Fighters From 86 Countries Isn't a Civil War'
Predating the 2011 Arab Spring unrest which would engulf Syria in a bloody foreign-backed civil war by nearly a quarter of a century, the CIA report offered an effective proto blueprint for US intelligence to play up factionalism between the Alawite minority (to which the Assad family belongs) and Sunni Muslims, who make up around three quarters of Syria's population.

The document pointed out that while tensions between the Alawites and Sunnis had declined significantly by the mid-1980s, "the potential for serious communal violence remains." In fact, the report's authors argued that a sectarian conflict leading to civil war is one of the top three options for regime change in Syria, the other two being a succession power struggle and military setbacks abroad in Lebanon or Israel sparking a coup.

"A Sunni rebellion in the late 1970s and early 1980s ended when Assad crushed the Muslim Brotherhood that spearheaded it," the report noted. It added, however that "although we judge that fears of reprisals and organizational problems make a second Sunni challenge unlikely, an excessive government reaction to minor outbreaks of Sunni dissidence might trigger large-scale unrest. In most instances the regime would have the resources to crush a Sunni opposition movement, but we believe widespread violence among the populace could stimulate large numbers of Sunni officers and conscripts to desert or mutiny, setting the stage for civil war."

The failed 'Sunni challenge' being referred to was the February 1982 storming of Hama, known in the West as the 'Hama Massacre', in which the Syrian government crushed an Islamist uprising led by the Muslim Brotherhood-led in the western Syrian city of Hama. The storming of the city resulted in the deaths of hundreds of soldiers and militants and several thousand civilians.

© REUTERS / Robert S. Price/Courtesy U.S. Navy
Syria Strikes Radical Departure from Trump's 'America First' Agenda - Ex-CIA Director
Without getting into too many details, the report claimed that any new "general campaign of Alawi violence against Sunnis might push even moderate Sunnis to join the opposition. Remnants of the Muslim Brotherhood – some returning from exile in Iraq – could provide a core of leadership for the movement."

Furthermore, the report estimated that "although the regime has the resources to crush such a venture, we believe brutal attacks on Sunni civilians might prompt large numbers of Sunni officers and conscripts to desert or stage mutinies in support of dissidents, and Iraq might supply them with sufficient weapons to launch a civil war."

Bringing to mind the long-standing ties between Damascus and Moscow, which go back to the 1960s, the CIA attempted to predict the Soviet Union's likely response to any attempt to oust Assad. It concluded that Moscow's best interest would be to preserve the status quo.

At the same time, the report suggested that Washington's best interest would be to see the creation of a 'moderate' Sunni regime, one which "might well include relative moderates interested in securing Western aid and investment. Such a regime probably would be less inclined to escalate tensions with Israel," the report added.

Interestingly, unlike its Obama-era successors, the CIA of the 1980s had warned that any prolonged chaos and civil war in Syria would turn it into a "dangerously erratic force in the region," and adding that "a weak government in Damascus might heighten Syria's attractiveness as a base for terrorism."

Ironically, the report also warned that any gains the US might see by Assad's ouster "would be mitigated…if Sunni fundamentalists assumed power." The reason, again, has to do with Israel's security: "Although Syria's secular traditions would make it extremely difficult for religious zealots to establish an Islamic Republic, should they succeed they would likely deepen hostilities with Israel and provide support and sanctuary for terrorist groups."

In reality, of course, the effort to destabilize Syria in the early 2010s was a joint effort by the US and its Israeli, Turkish and Gulf State allies. It would be Turkey, Qatar and Saudi Arabia, not Iraq, that would provide the lion's share of the weapons used by militants. Furthermore, the CIA report failed to mention or predict the inflow of tens of thousands of jihadists into Syria from abroad, even though it was employing similar tactics in Afghanistan against the Soviet Union during this period.

It's unknown whether the CIA of the 1980s genuinely believed that the 'moderates' in whom they placed their hopes  wouldn't immediately be swallowed up by radical Islamists, although US experiences in Iraq and Afghanistan in the 2000s make it unlikely that the CIA of the 2000s couldn't foresee such an eventuality.

Why US Attack in Syria Seems to Be 'Pre-Planned'