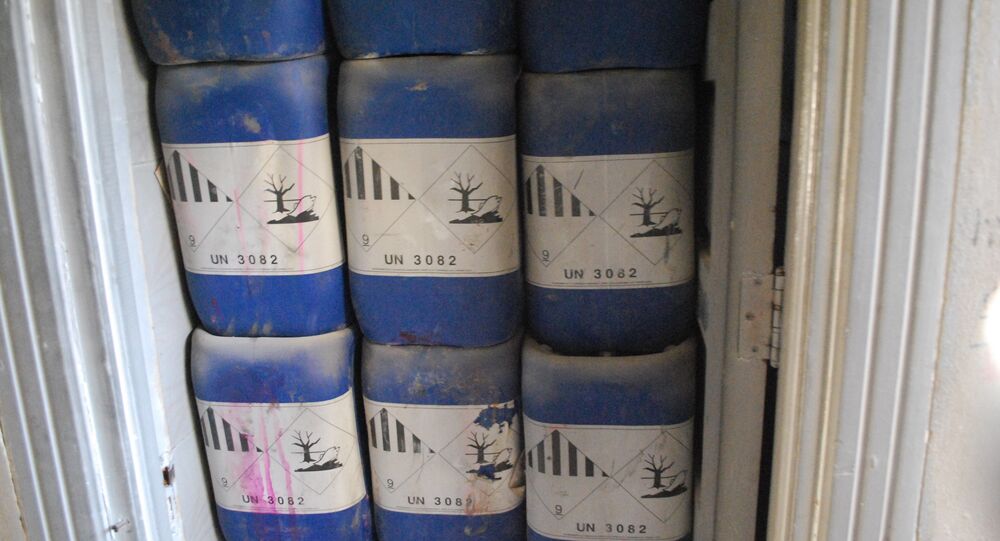 Damascus has repeatedly warned the UN Security Council and the Organisation for the Prohibition of Chemical Weapons (OPCW) that the terrorists of Daesh and Nusra Front were bringing weapons to Syria from Iraq and Turkey, Syrian Foreign Minister Walid Muallem said Thursday.

"Nusra Front and [Daesh] and other organizations continued to store chemical weapons in urban and residential areas. And we have sent more than a hundred telegrams to the Security Council and the Organisation for the Prohibition of Chemical Weapons, telling them or sending them information about chemical weapons being brought to Syria from Iraq and from Turkey," Muallem said.

© AFP 2021 / ILYAS AKENGIN
Assad Says Turkey Prevents Syria From Getting Info on Terrorists Crossing Border
Damascus is in contact with Moscow regarding the idea to create a committee to investigate the reported chemical attack in the Syrian Idlib province, the country's Foreign Minister Walid Muallem said Thursday.

"Yesterday, the Russian representative at the United Nations made a proposal for forming a neutral and non-politicized committee to initiate investigations. Our experience with such commissions, because by now we are used to these commissions, because we have been subject to such accusations, has not been encouraging… We condemn the use of chemical weapons anywhere against anybody… but in order not to jump to conclusions we are coordinating with the Russian side in order to see what the efforts aimed at forming that committee are," Muallem said.

© AFP 2021 / Louai Beshara
Using Chemical Weapons Against Civilians? Assad 'Would Never Make Such a Crazy Move'
Any commission to investigate the reported chemical attack in Syria's province of Idlib "should be neutral, not politicized," Syrian Foreign Minister Walid Muallem emphasized.

According to the minister, any such commission should start its work "from Damascus."

"In any case, we are coordinating on a daily basis with Russia," Muallem added.

On Tuesday, the Syrian National Coalition of Revolution and Opposition Forces reported that some 80 people were killed and 200 injured earlier on that day in a chemical weapon attack in the town of Khan Shaykhun in Idlib, blaming the Syrian army for the incident. A source in the Syrian army later told Sputnik that the army did not have chemical weapons and the allegations could be part of anti-Damascus propaganda.

© AP Photo
Washington 'Knows Damascus Has No Chemical Weapons', But Still Blames Assad
The Syrian Foreign Ministry, the army command and the country's representatives in the United Nations have clearly said that Damascus had never used the chemical weapons in the past, and it is not going to use it in the future, Syrian Foreign Minister Walid Muallem noted.

"All statements categorically denied the use of chemical weapons by our armed forces in the past as well as in the present and in the future," Muallem said, referring to the incident with chemical weapons in the Syrian province of Idlib.

Moreover, the Syrian government forces have never used and will never use chemical weapons against not only civilians, but terrorists as well, the country's Foreign Minister Walid Muallem said.

The foreign minister stressed that the government forces had made a significant breakthrough.

"Is it logical or reasonable that we use chemical weapons at the time that we have started to see that change in the international public opinion that started to realize the reality of the situation in Syria?" Muallem said.