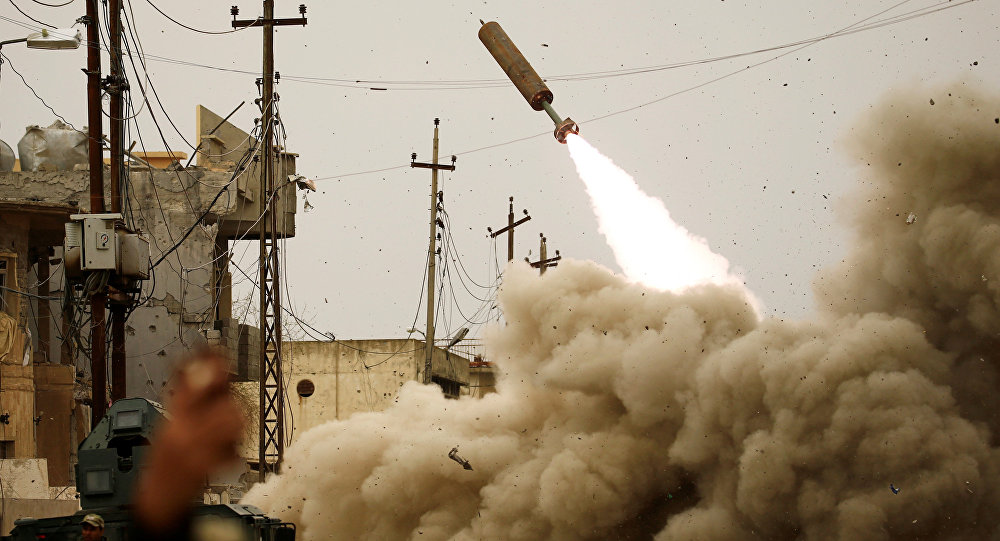 Over a year has passed since the start of the Iraqi offensive to liberate the city of Mosul and the surrounding region from the Daesh terrorists. Russia's Expert magazine provides a succinct summary of the campaign, and why the Blitzkrieg campaign which was supposed to 'wrap up by Christmas' ended up becoming a long, bloody, drawn-out struggle.

On April 1, an Iraqi Interior Ministry source told Sputnik that the operation to liberate the northern Iraqi city of Mosul from Daesh would be wrapped up before the end of the spring. However, two days later, an Iraqi army source told the news agency that the military had slowed its offensive in order to avoid civilian casualties.

The conflicting reports on the city's capture are nothing new. Last September, President Barack Obama optimistically declared that Mosul would be liberated "fairly rapidly," with pundits immediately suggesting that the White House was hoping that the city would be freed prior to the November 8 US presidential elections, giving a much-needed boost to Hillary Clinton and the Democratic Party.

© AP Photo / Geert Vanden Wijngaert
Belgium Investigates Whether Or Not It Was Responsible for Mosul Civilian Deaths
Unfortunately, it has now been nearly six months since the operation to liberate Mosul proper began, and over a year since the start of Operation Conquest, the offensive to free the surrounding area.

Analyzing the current state of the operation, Russia's Expert Magazine started off by recalling that in June 2014, Daesh managed to capture Mosul in just six days. In the operation to regain control of the city, the Iraqi Army, Shiite militias, Kurdish forces and a ragtag collection of volunteers gathered an estimated 150,000-200,000 troops, with the US, the UK, France, Germany, the UAE and Turkey all providing air support. However, this massive force has not been able to speed things along.

"The active phase of the assault began in October 2016, miraculously coinciding with the final stage of the US presidential elections," the magazine recalled. "The Obama administration desperately wanted to achieve a clear success in the fight against Daesh extremism, which in the opinion of then-presidential candidate Trump was caused by Obama's misguided policy in the first place."

© AFP 2019 / BULENT KILIC
Members of the Iraqi Counter Terrorism Service (CTS) drive near the village of Bazwaya, on the eastern edges of Mosul, tightening the noose on Mosul as the offensive to retake Daesh stronghold entered its third week on October 31, 2016

"But the coalition has shown itself unable to take Mosul, not in October 2016, but to this day," Expert added. The eastern half of the city, divided in two by the Tigris River, along with about a third of its western portion, has been liberated, with the terrorists now holed up in the remaining portion of the western half of the city.

"Although there are only about 4,000 militants in Mosul, they often use suicide bombers in mobile car bombs, who blow themselves up among the coalition forces. Furthermore, well-equipped within the confines of the city, Daesh has had no trouble ambushing Iraqi assault units before moving on to other parts of the metropolis. As a result of these tactics, every terrorist killed can cost up to several dozen dead and wounded among Iraqi troops."

© REUTERS / Rodi Said
US-Led Coalition Strikes Destroy Daesh Car Bomb Facilities Near Raqqa
Expert recalled that Daesh used essentially the same tactics in the significantly smaller city of Fallujah in early 2016, with the Iraqi army deploying 50,000 troops against 1,500 militants, taking over a month to free the city from the terrorists.

"If, as a result of the assault on Mosul, the Iraqi Army loses most of its trained and combat-ready formations, nothing will prevent the militants from capturing other Iraqi cities, where there will be no one left to free them afterwards," the article warned.

Last fall, upwards of 5,000 Daesh militants were estimated to have left their stronghold in Mosul, dispersing across the Iraqi desert. "As was later discovered, they soon moved to assault other Iraqi cities…They attacked Kirkuk, Rutbah, Sinjar and the small settlement of Adzhil near Tikrit." Daesh "had no intention of holding or even capturing the cities – the goal had been to divert some of the force which had collected near Mosul," the magazine emphasized.

© AP Photo / Felipe Dana
A boy rides his bike past destroyed cars and houses in a neighborhood recently liberated by Iraqi security forces, on the western side of Mosul, Iraq, Sunday, March 19, 2017

Ultimately, Expert noted, "the only thing preventing the attackers from facing catastrophic losses, and turning the Mosul operation into a pyrrhic victory, is the bombardment of the [terrorist-held] areas in the run-up to their assault. If aviation and artillery were to flatten these areas completely, losses from the assault would drop to zero."

"Fortunately [for the coalition], the Western press, in contrast to the assault to free Aleppo, has not been very interested over the fate of the civilian population of Mosul, and has not called for condemning or denouncing anyone," the article sarcastically added.

However, the United Nations is paying close attention to the situation. Farahan Khak, deputy spokesman for the Secretary General, recently said that the UN was concerned about reports of large numbers of civilian casualties in the city as a result of airstrikes.

As a result, "the Iraqi Army was forced to declare the temporary halt in its offensive. The US, meanwhile, which is carrying out the bulk of the airstrikes, seems unlikely to decide on a major boots on the ground campaign to free Mosul and, most likely, will continue bombing from the air," the magazine concluded.

US Sends More Troops, But Still 'Doesn't Have Clear Strategy in Middle East'